Seriously, she just keeps growing and growing and I can barely handle it. I know all you normal (non-nut job) parents out there are reading this like “Duh, of course she keeps growing, it’s what they do!” but it’s going too fast! 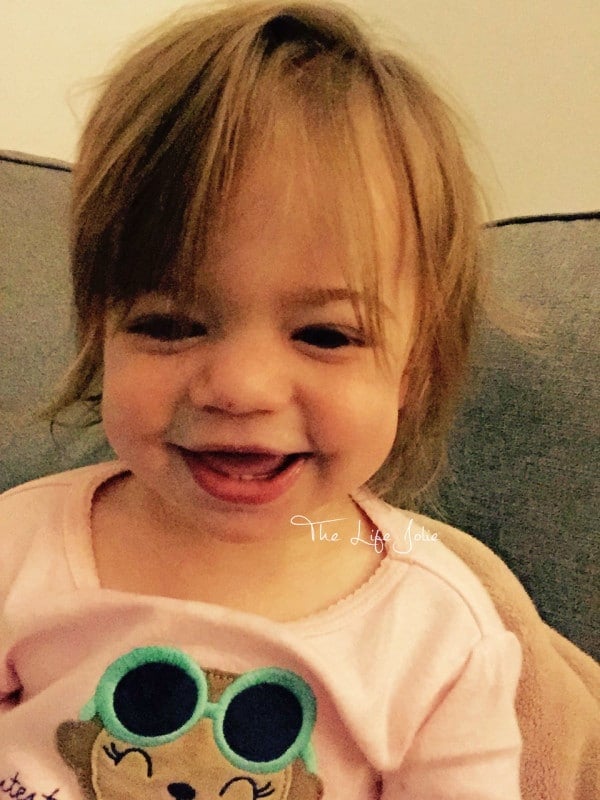 A couple weekends ago, we had our first chilly day. J got really excited because before she was born, he found that amazing little 18 month puma jacket and pants set. It was the first outfit that he picked out for her without any input from me and he was really proud of himself. So you can imagine his anticipation of her finally being able to wear it!

I, on the other hand, had a moment of pregnant-chick-hormonal-nostalgia. I remembered when the outfit first came in the mail, back before A was even born. I couldn’t imagine that she’d ever be big enough to fit into it, I just couldn’t wrap my head around that far ahead. Well sure enough here we are. 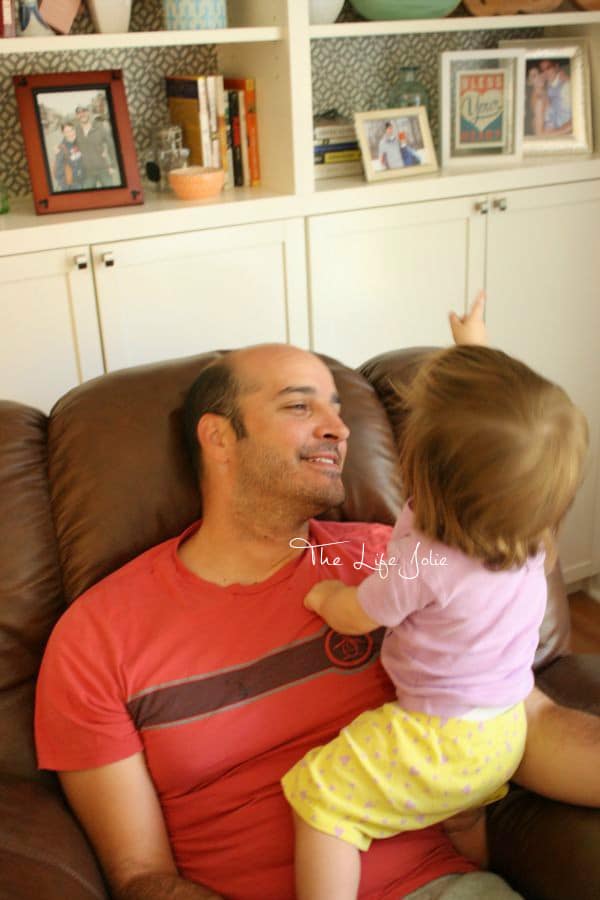 A is all about testing her limits, as most kids this age can be. She is walking/almost running everywhere and getting into everything. She will stand up in her little white chair that we got her and look to make sure someone is watching and when we tell her to sit down, she gives us a shit-eating grin and thinks it’s the most fun little game.  Most times, we end up folding the chair up and putting it under the couch because she just won’t listen.

The fact that she will no longer listen to me when I call her is definitely a lot more challenging. A few weeks ago I ran upstairs to get something while she was in the kitchen with J (he was making dinner). He was keeping a close eye on her but he turned around for a split second which was long enough for her to stick a small magnet in her mouth.

I came down right as this was happening. It was a scary moment for me because it was the first time that she did something really dangerous. I immediately got down to her level and right into her face. For the first time ever, I raised my voice to her and said “Alice, no! We don’t put those into our mouths” while I removed the magnet and put it at the very top where it was unreachable. 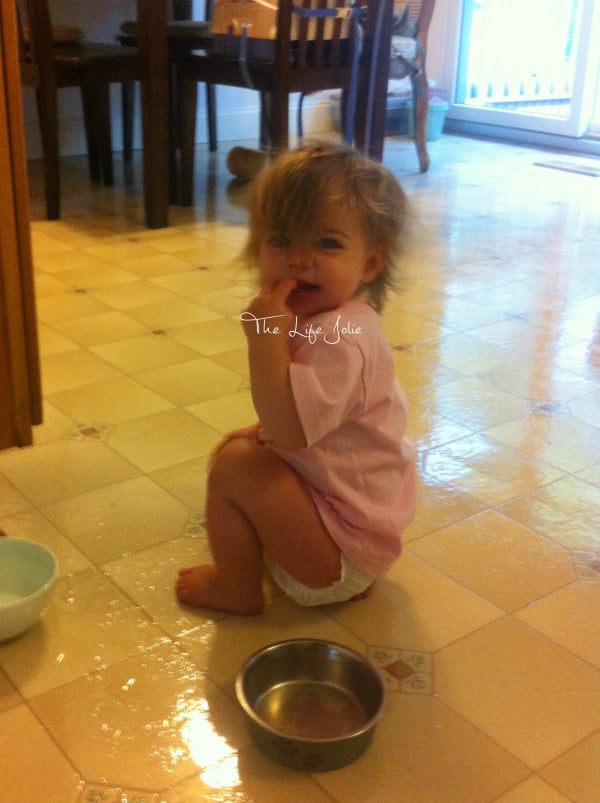 This seemed to shock and scare A. I watched as her face went from a big, bright smile to a full-on, lippy pout to crocodile tears. In that moment my heart broke a bit, as that’s not a side of me I’ve ever had to show her. But in my heart, I knew that this what what needed to be done because she needed to understand that she could not do that again and just how serious I was.

I believe it worked because she hasn’t really messed with the magnets too much since (although that was the only magnet small enough to be a hazard and it no longer lives in a place that she can reach it because better safe than sorry). We had one other situation where she turned and start walking in the direction of the street. She wasn’t actually anywhere near the street but because she was headed in that general direction I had the same reaction. She was equally scared though I’m not sure she quite understood my point as well as the magnet since she was still so far from the actual street. I’ll definitely need to work on that. 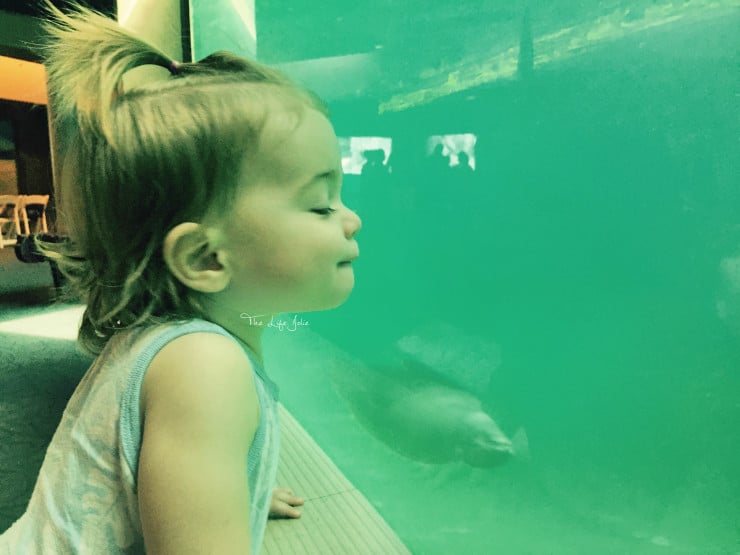 Our gal is super interested in how things work and how they are put together. She loves playing with the plastic clasps on the safety straps of her booster seat and the seat belt part of her old infant seat. She also loves putting the overs onto tupperware bowls- she has full access to these in the bottom drawer in the kitchen and loves to take them all out. We may have a budding engineer on our hands!

A does get frustrated pretty easily though. If something doesn’t work pretty quickly, she gets irritated and starts whining. She definitely gets this from me and we are working on it (her and I!). J and I go out of our way not to feed into any whining or tantrums because I know that now is the time make sure that we are extra consistent with boundaries and beginning to teach her how to behave.

For all of A’s grouchy moments, she’s also got plenty of super fun and silly moments. She loves getting her teeth brushed and gets the biggest, brightest smile when I get the toothbrush out! She also loves watermelon, any sort of dessert, peas, milk, water. She has gotten a bit pickier but not terrible (yet!) and insists upon using a fork and spoon with varying success. She still eats more than I expected at this juncture and does very well with not snacking all day the way many kids do. She gets one afternoon snack at daycare and once in a while on weekends but that’s it. I’m very happy about this, and believe that’s why she eats so well at mealtimes.

Nothing is more fun for A than when Macie is playing with her toys- we’ll throw the toys and Macie will run after them and A gets so excited and runs after her shrieking and giggling. It really is the sweetest thing. She hasn’t quite mastered throwing Macie’s toys for her but we’re getting there (she kind of just gives them to her for now).

She also loves to pull up J’s shirt and find his belly button.She thinks it’s especially funny when she puts her finger in it and J makes a big show of giggling loudly like she’s tickling him. 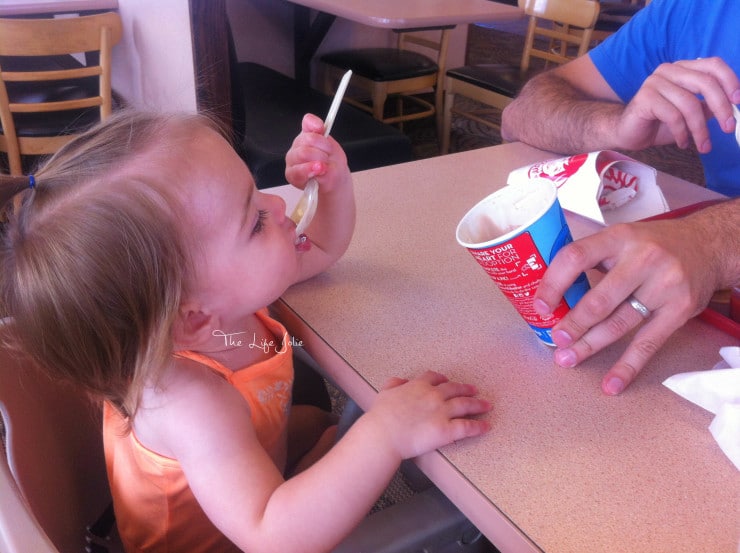 A still does an excellent job of going down to sleep. Her routine is pretty specific: she has a bath, we get her dressed and brush her teeth and her hair, we wind down in her room (although she still won’t sit still for a story!) and at 8pm she gives everyone a kiss-kiss and waves goodnight and then we put her in her bed with her binks and her blanket.

The blanket is a new addition at home (she’s slept with one for a little bit at daycare) and she does just fine with it. Sometimes she’ll play with her binks for a couple minutes but mostly she lays down and goes to sleep.

She’s been waking a bit earlier than 7am lately (more like between 6:15am and 6:45am) and also getting tired a bit earlier- I wonder if this will continue with the weather change, specifically the going to bed earlier. 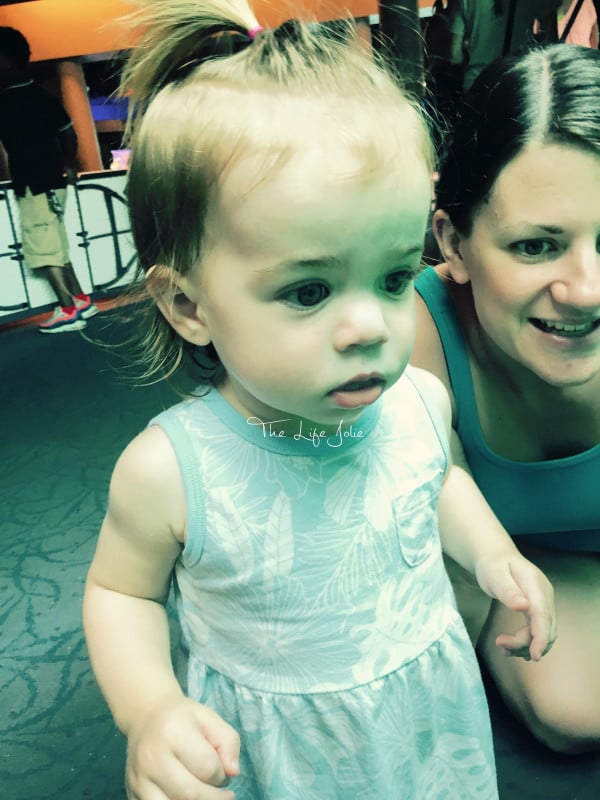 I know we need to get rid of the binks and transition from bottles to full-time sippies, I’m just trying to figure out the most logical way to go about these transitions. Right now she still only takes a bink for sleeping, to the point that if there’s a bink on the floor during the day she continues to pick it up and bring it over to us. I still worry about weaning off of the binks because I’ve noticed she’s more prone to wake earlier in the morning if she’s thrown all of her binks out of the crib. I suspect we’ll end up just going cold turkey and ripping the bandaid off quickly, sooner than later. Definitely before this next baby comes. 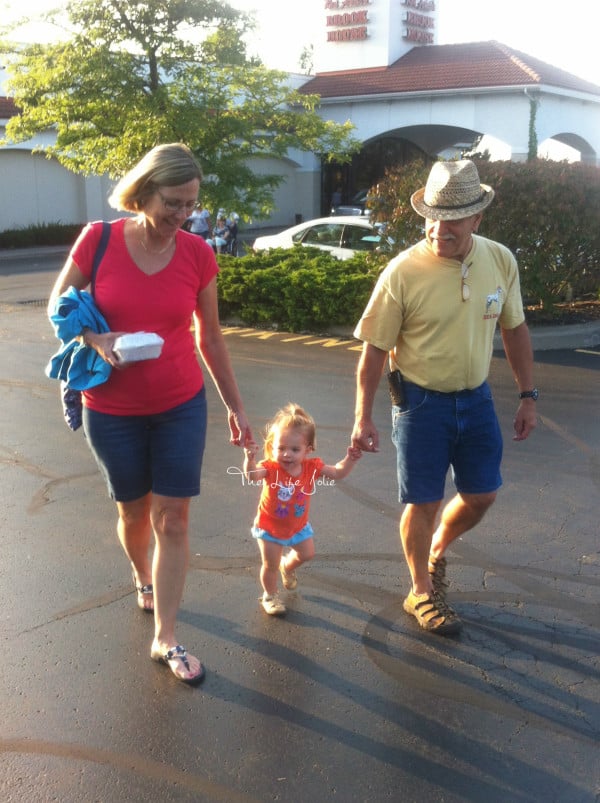 Sippy cups are another challenge. She likes them for sipping on water during the day and even some milk for some meals, but she won’t kill a sippy cup of milk the way she does with a bottle of milk after naps and in the morning. Our Pedi and I had talked about weaning to sippy’s before 18 months but I’m sad to say we haven’t made much progress. I also believe this is in large part my fault for not really putting a ton of effort into the transition. I’ll be making a game plan shortly to try and get going on this.

I’m starting to dream of the day we can potty train A. I know it’s still far off and while I’d love to have her out of diapers before this baby comes, I’m pretty sure that’s just a fantasy. But a gal can dream! A loves to come into the bathroom when one of us is on the toilet and give us a courtesy flush. Thanks A! She’s definitely interested in how the toilet works and I tell her what I’m doing when I’m on there. I figure it never hurts to at least develop an interest so that when she is ready she’ll already have an idea of what’s up. 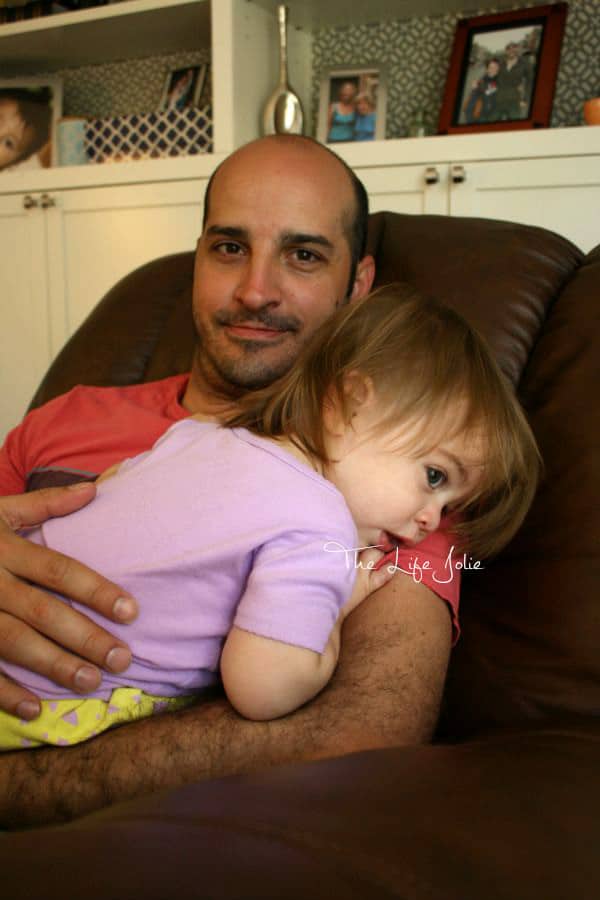 Things are definitely more challenging now that A is fully mobile, as I suspected they would be. She’s still very well behaved at restaurants and in public in general (we also use common sense about where and when we take her places!). She just wants to be up and around more often. It’s a lot of fun and also very exhausting.

A is very generous in sharing her love. When she says goodbye she’s not shy about giving kisses. She loves to wave to people and blow them kisses. In the morning when she leaves for daycare, she tries to say “buy-bye” and it comes out as “ta-ta” which is really cute. One day after work she climbed onto the couch (another skill that she’s mastered) and spent a good 5 minutes going back and forth giving J and I nonstop kisses which melted my heart completely.

I think we can officially say that we have a toddler on our hands now. It’s full of fun and challenges and I wouldn’t trade her in for anything. 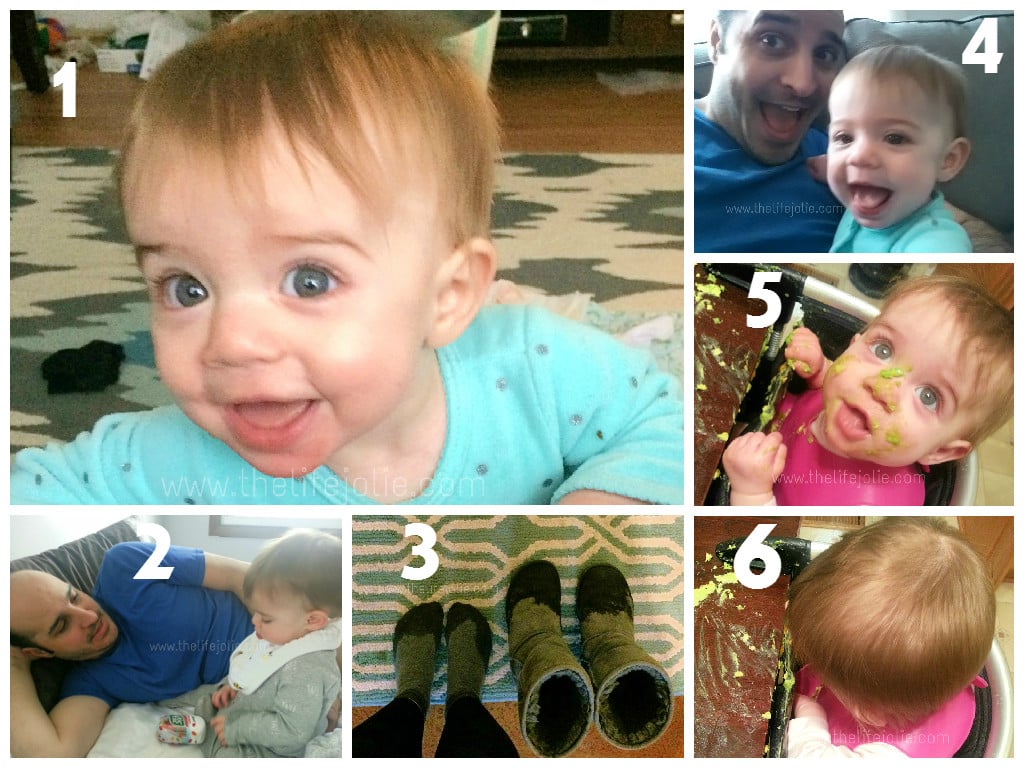 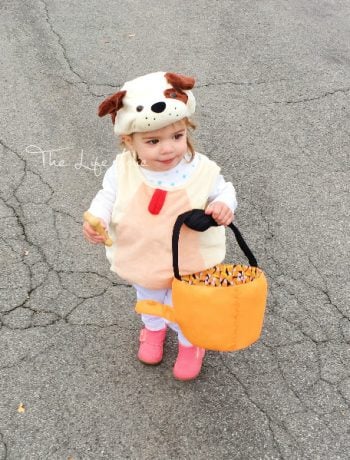