How is A 22 months old? I could have sworn I just posted A’s 21 month update! Time is flying at record speed and I don’t even have much time to be sad about it because we’re too busy having fun and taking it all in. I suppose I should start thinking about A’s second birthday party because it’s coming up quickly, whether I like it or not (for the most part I do like it, except for the small amount of Mommy-sadness/pride that she’s making her way out of the nest a little bit more everyday)! 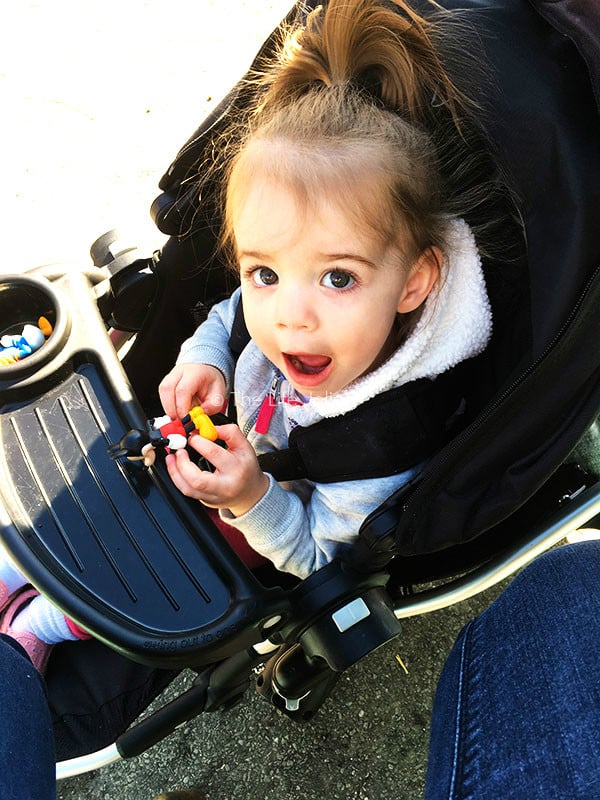 Clearly, A can’t believe it either!

A continues to handle this transition into being a family of four pretty well. Most importantly, A has nothing but love for her sister. She doesn’t hang on her but she gives her kisses and when she goes down to sleep at night (around 30 minutes after we put T down) she always says “bye, Tess” which is her way of saying goodnight at this point. She is especially proud when I bring T into daycare on the days that I pick her up. I still get the same happy yell of “Mama!” and her running start across the room to get to me, but then she immediately says “Hi Tess!” You can see in her face how much she loves that all the other kids come over to look at the baby (I don’t let them get too close to her, which I think kind of makes A happy as well!). She also loves to help! At home, I send her over to a certain cabinet that she knows how to open and she will get me “Tessa Diapers” and “Alice Diapers” as well as wipes. I only had to show her the difference between the diapers once and she picked it right up! 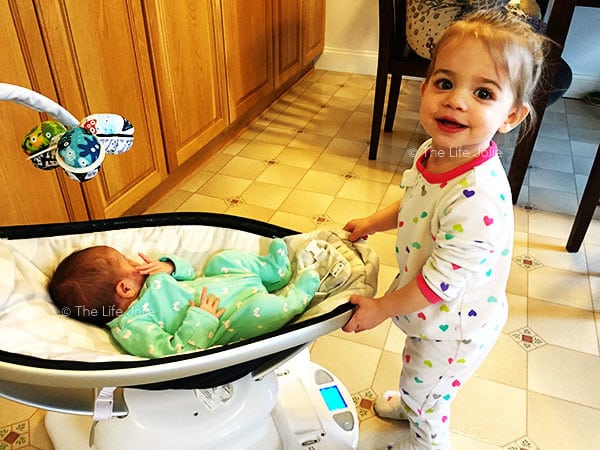 The hardest part of the transition is that A was waking up a little bit at night a few times. We had one extremely rough night where she refused to go back to sleep, but I think that is mostly J’s and my fault. We made the mistake of allowing her to come into our bed for about 45 minutes.

Now, I think it’s great that co-sleeping works well for some families. But it absolutely does not work for our family and that particular night only reinforced this for us. T definitely got more sleep than anyone else. Outside of that rough night, if A wakes at night we’ll usually give her some time to see if she is actually waking up and not just in between sleep cycles. If she is indeed waking up, J will usually go in. At that point he’ll pat her back for a minute and tell her really sweetly that it’s time to go back to sleep (unless she is waking due to teething or illness, then we’ll give a short snuggle or meds if necessary). 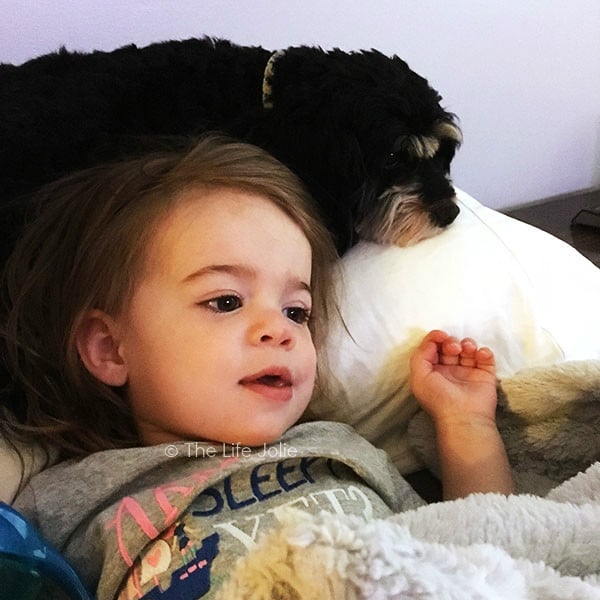 She was SO excited to have Macie snuggling her head.

She is still testing limits, which seems to be part normal for her age and part of the transition as well. We rarely need to do time-outs because she’s pretty good about respecting our authority. Usually the mere mention of a time-out lights a little fire under her little butt. We still have our challenging moments and we get through them. J and I work really hard to be consistent and discipline A, even when it gets hard. And it can be difficult at times, which I think is the case no matter how good your kid is (and A is pretty well behaved overall!). We’re learning as we go, but so far our tactics of setting firm boundaries with lots of freedom within those boundaries as well as time-outs when necessary are working very well for us. 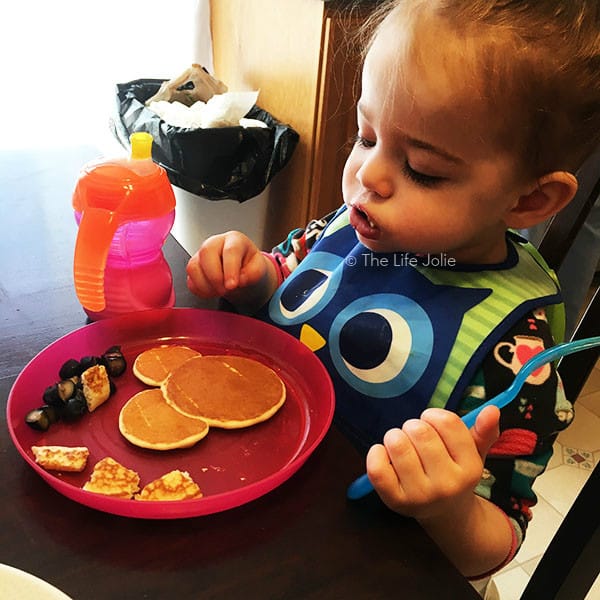 J has perfected the Mickey pancakes. He started practicing his skills shortly after I became pregnant with A.

A’s vocabulary continues to explode. She is constantly saying new things, pronouncing words more accurately and doing better and better with stringing together phrases. Though we don’t go out of our way to fast-track A to Yale or anything (I’m really not into too much structure this early, favoring free-play instead- don’t even get me started on the ridiculous expectations put on Preschooler’s and Kindergartner’s these days!) but A loves to do things like count to ten and point out different colors to us. She also requests certain songs like ABC’s, Row, Row, Row Your Boat, Twinkle, Twinkle Little Star and The Wheels on the Bus. She’s even beginning to learn the words to them. She also knows all of her Mickey Mouse Club House characters (though we still limit the amount of TV she’s allowed to watch). She favors “Mimmie” and “Po” (Pluto). 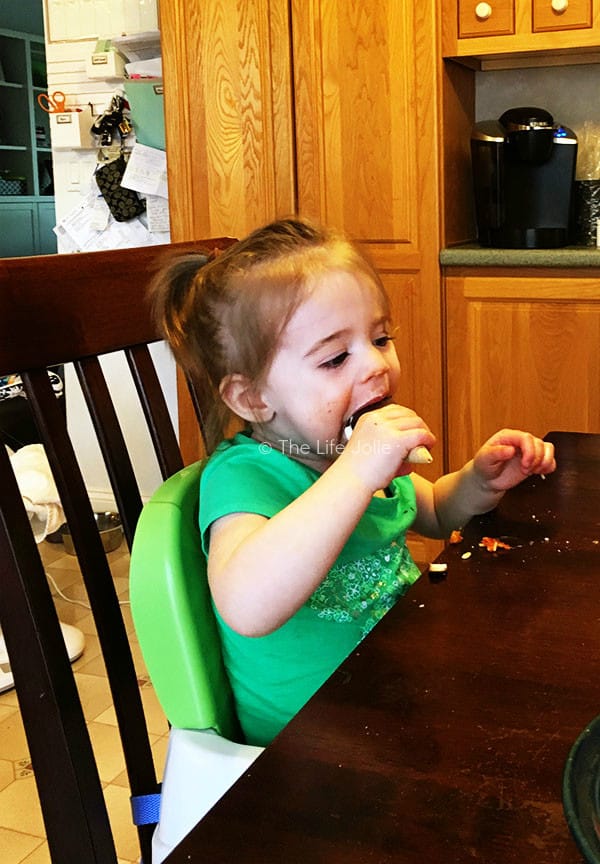 I’m thinking it’s almost time to get her some clothes to play “dress up.” They already do this at daycare, but she’s more and more interested in dressing herself. At times she even goes as far as insisting on putting many of her clothes on herself in the morning. She can successfully put on her socks, shoes and coat at this point. She’s hit-or-miss with her pants. She’s almost there with the zipper and we haven’t yet mastered her shirt. 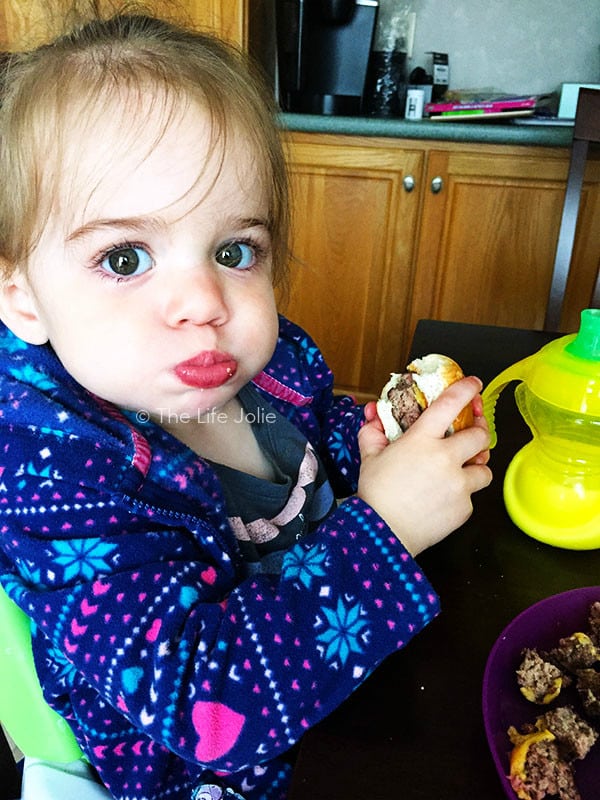 Tonight gave a cheeseburger a shot in it’s typical form instead of only cutting it up for her. She was super excited and went to town on it!

She loves to Facetime with her grandparents and of course spend time with them in person (she’s going to lose her mind with happiness in a month when my in-laws arrive and she gets to have all four of them in the same room!). She calls my sister Kiki and has even learned to call Macie by name instead of Doggie. It really cute to hear her going through the names she knows to herself before she goes to sleep. Her teachers tell us she does this before her nap at daycare as well. 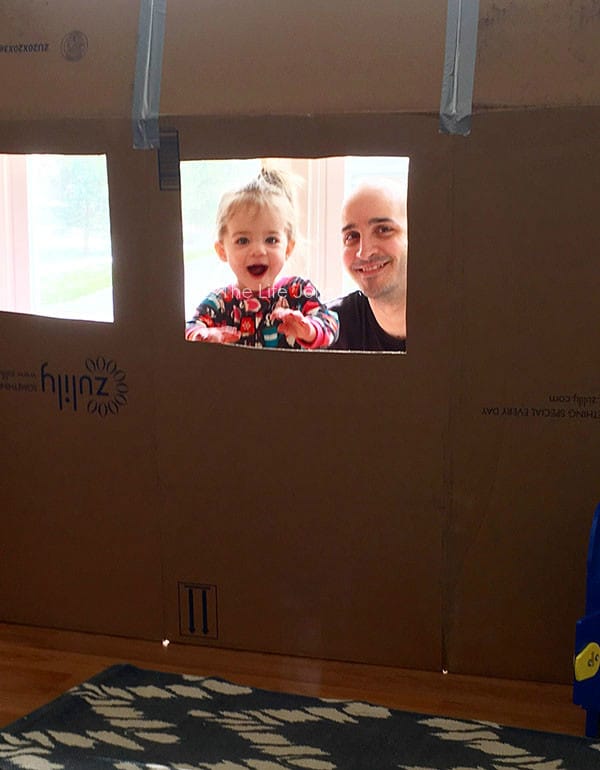 One day, A woke up from her nap to find that J had made her a fort out of some old paper boxes, complete with windows and a door to go in and out. He put her kitchenette and some other toys in there and A was totally in her glory.

Now that the weather is (finally) getting warmer, A has been loving spending time outside. We take walks most days and she loves going to the playground as well. While A’s still not a fan of the swings, the slide is totally her jam. I think she’s treading a fine line between being a little intimidated by it and absolutely loving it. We also just got a membership to the zoo for this summer, so that should be fun!

In terms of playing, A loves to color (and delegate coloring duties, much to our amusement). When coloring, she also asks us constantly to make a ball and a dog. She uses her play kitchen

to make us all sorts of delicious imaginary food to taste. The giant Mega Blocks

are pretty fun for her, especially getting to dump the entire bag out, which seems to be the highlight. She really enjoys playing with water both in the bath (thank goodness that’s back to normal!) and in the kitchen sink. 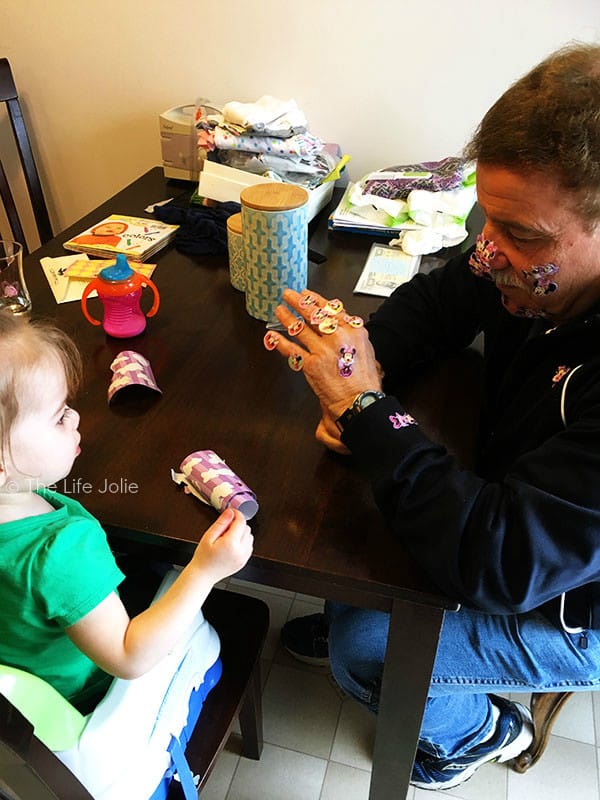 Stickers are taking over our home.

Her current favorite thing is playing with stickers. We got a ton of stickers at the Dollar Store (she favors her Minnie Mouse stickers). She loves to put stickers on her face and everyone else’s faces. We like that this makes them a little less sticky so that if they end up on furniture, it’s not a nightmare to get them off. Needless to say we’re finding stickers everywhere but it’s not the worst thing in the world. Cheap entertainment, right?

I recently picked up a Minnie Mouse potty seat

(similar). I noticed at daycare they use a seat that actually sits on the toilet instead of the potty chair she already has. She was super excited to receive it and is much more interested in using it. I’m not sure if she’s ready to actually potty train yet, but she now asks a few times a day to use the potty. Her teachers have also said she asks to use the potty all the time at daycare. We go along with it but we don’t have any expectations and we don’t give her pressure to use it. I also talk enthusiastically about how she gets to have undies and big girl panties when she decides she wants to learn to use the potty all the time. 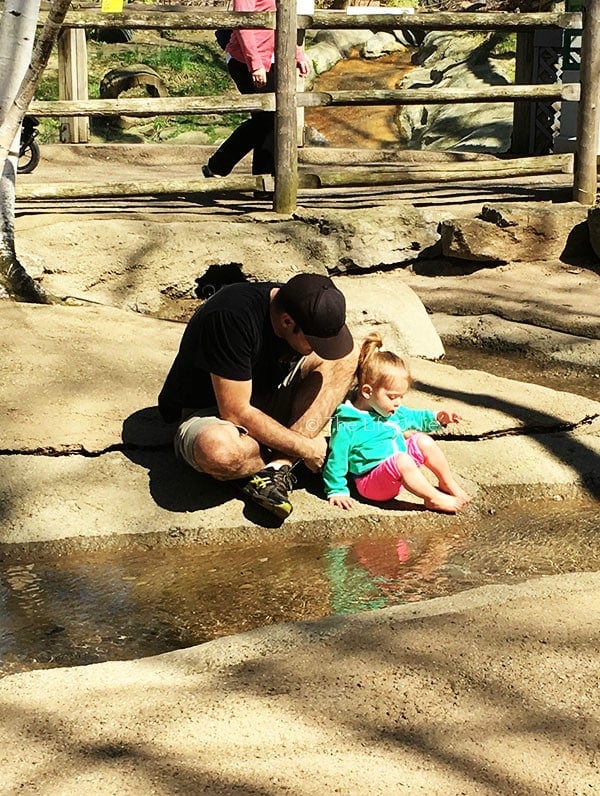 Checking out the eco area of our local Zoo.

I am astounded by how the addition of T to our family has made me fall even more in love with A. I didn’t think it was possible to love her (or T) even more because my heart is already overflowing with love for them and J. These girls make us so impossibly happy in a way that I had no idea was even possible. 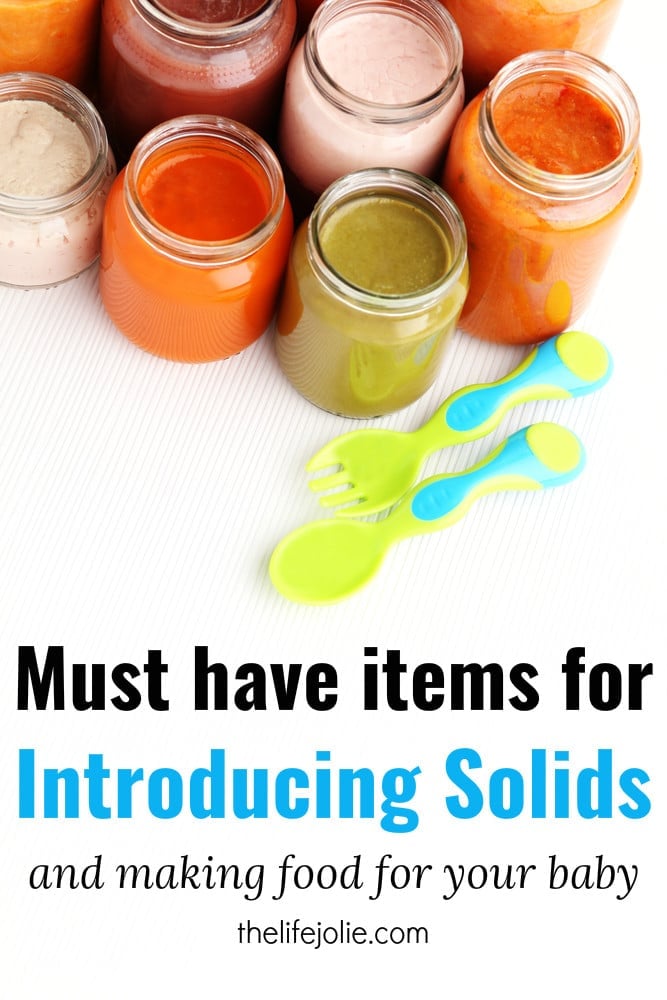