This DIY Awning and table backdrop a simple and fun way to decorate a dessert bar at your next party or event. The background and awning are pretty easy to make and your guests will be wowed! 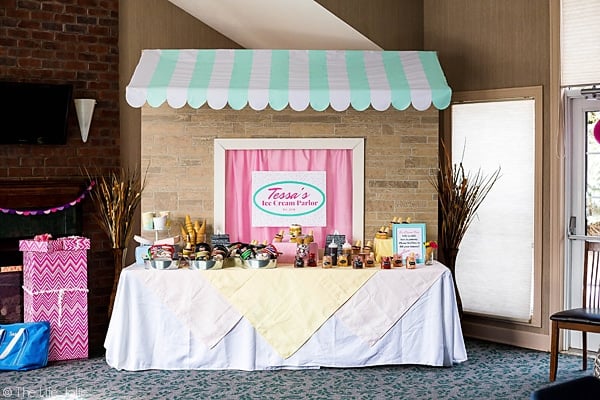 You guys, I am seriously feeling the love after Wednesday’s post sharing all the details of Tessa’s Ice Cream Social Birthday Party. Thank you for the kind words and of course sharing your favorite ice cream flavors with me! Though putting everything in motion to make the party a success was a ton of work, it was also pretty awesome seeing it all come together.

I think one of the biggest challenges in this process was trying to figure out how we would put together a backdrop and awning for Tess’a Ice Cream Parlor that would hold up nicely, was transportable and was doable for average people like us to put together. Pinterest had plenty of super cute finished photos that offered a great deal of inspiration, but there were very few actual tutorials, and the ones that were out there, weren’t exactly what we wanted. 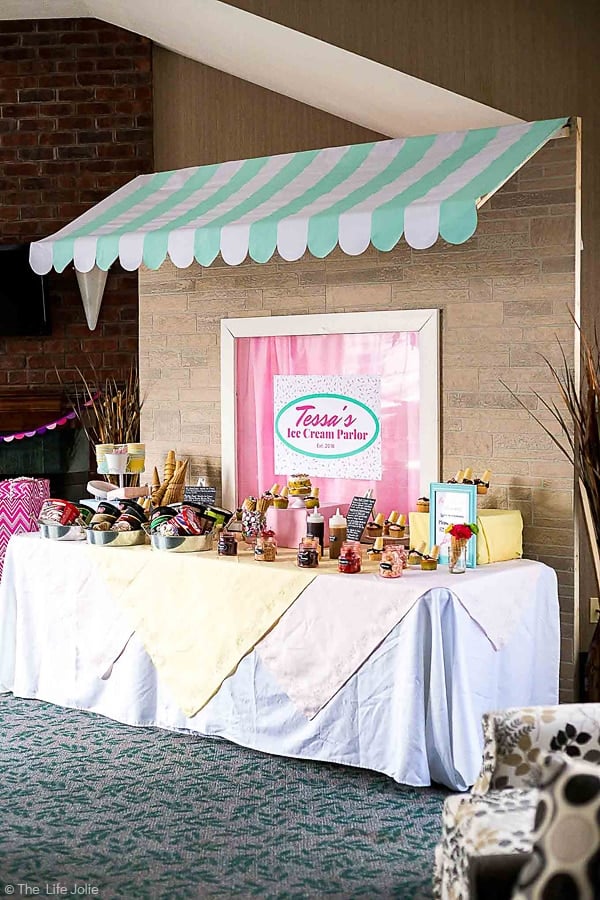 We have friends and family who are engineers and they were open in sharing their tips, which was much appreciated. J is in telecom with a background in film and television production. He is pretty handy and happens to be one of those smart people who are naturally good at figuring things like this out. Though neither of us are experts in constructing set pieces, he seriously rose to the occasion. 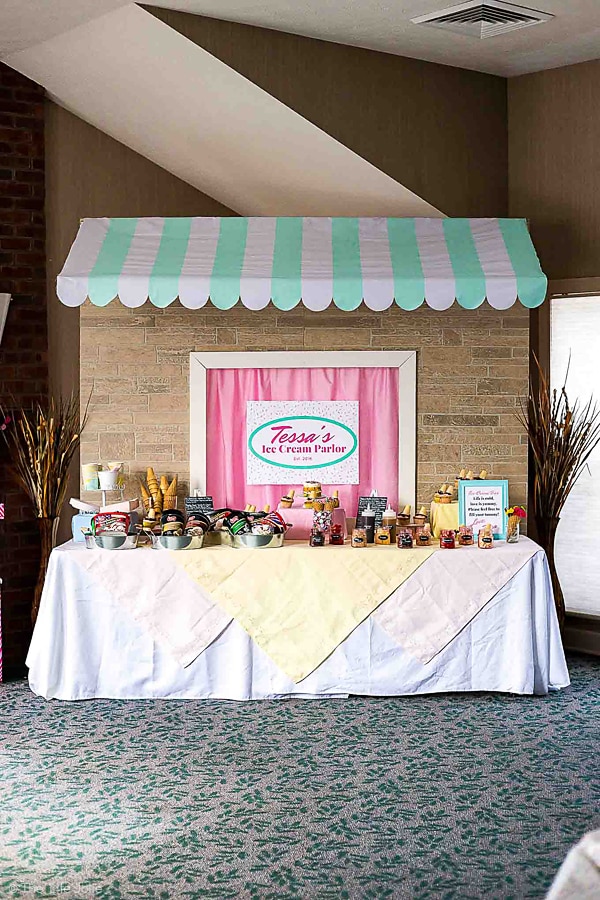 Now, I should probably take this moment to share with you that I originally wasn’t planning on something of this scale. In my naive mind, I though we could get some foam board and fabric and figure it out. And now that I’ve seen how amazing the end product is, I am so glad that I gave J free reign to figure it out and make it what he wanted. It would have been pretty bad if I had been in charge of creating this!

When J told me he want to make it look as much like a real building as possible, I had my doubts. Oh ye of little faith (or to be more accurate, oh me of little faith!). But I told him I would go with whatever he though and once I understood what he was thinking I was all in, 100% on board. 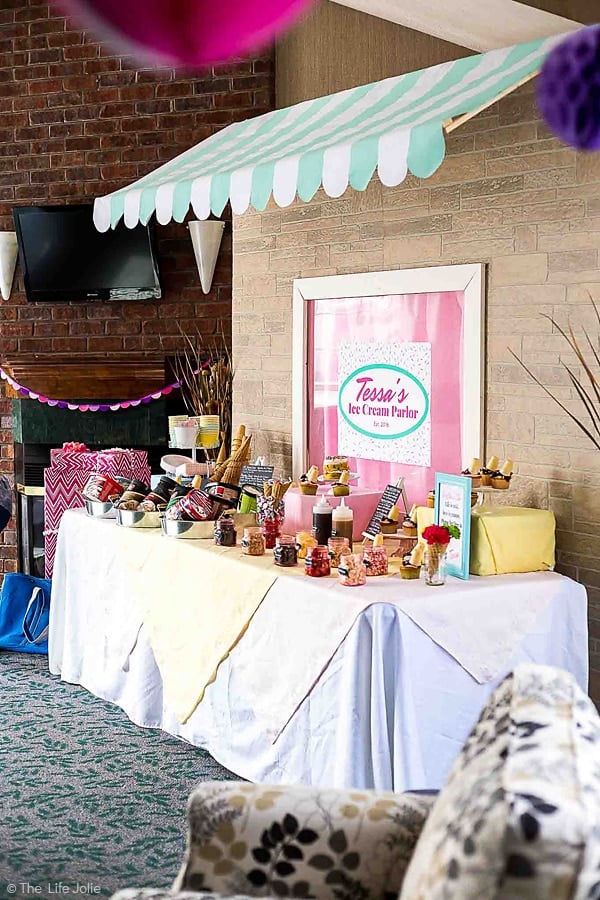 So now, without further adieu, here is J with his directions for making this whole thing happen.

I proposed the idea of making it look more like a realistic ice cream storefront to Jessy. I’m not sure if she completely understood my vision, but she gave me the green light anyway.

I had to keep some specific things in mind when designing the storefront. The party was not located at our house, so I would need to transport it to and from the location and be able to easily assemble it in a relatively short amount of time.

Here is a list of materials needed for this project:

1 in. nails for the gun nails

1/2 inch screws for the hinges

I talked Jessy into a brick façade with the idea that it looked more like the outside of a building. We used two faux brick wall panels for the backdrop. These wall panels are thinner than plywood, so they’re not terribly heavy, but I needed to stand them up vertically and make sure they did not fall.  I measured out where I wanted the window – we went with dead center. The window was 32” high and 42” wide.

I decided on a simple support built out of 2 in. x 4 in. I’m not sure if there is a technical name for it, but I basically built a wood frame the shape of an isoceles triangle. The wall panel is 8′ tall, so one 2 in. x 4 in. will run vertically from top to bottom. I cut a 24 in. length to extend out on the ground. Finally, the angled piece that completes the support was a 1 in. x 2 in x 8 ft. Furring Strip Boards. I cut these to be about 65 in. long. It was as simple as screwing them all together to form the wall support. 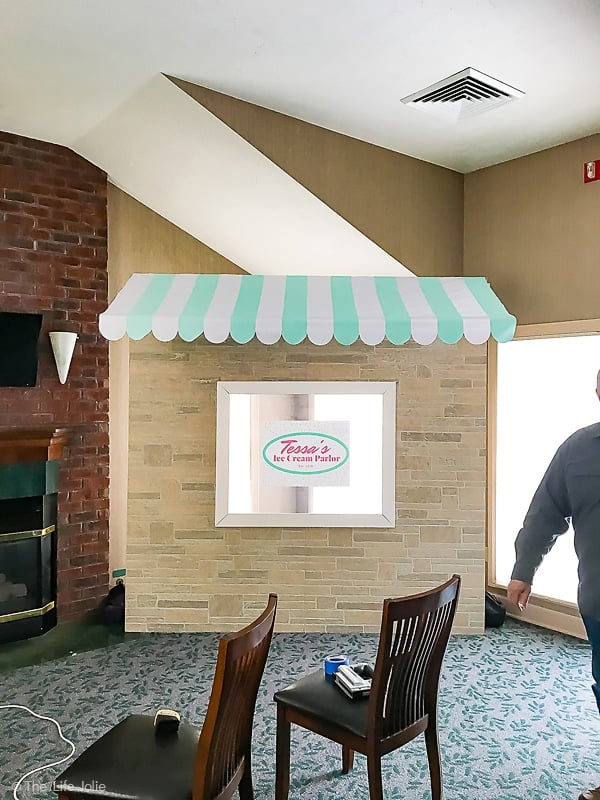 I didn’t want to spend too much money on the window frame, so I got a simple wood board that was about 4 in. wide. You can really use whatever size you want based on your preference for the thickness of the window frame. I measured and cut the pieces to match the size I wanted the window to be, cutting the ends at a 45 degree angle so they would line up together. 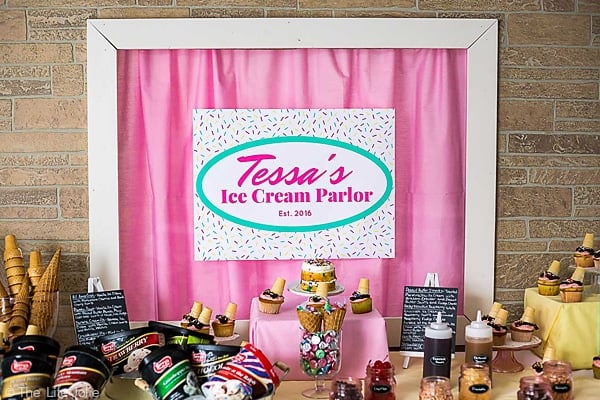 We went back and forth for a while trying to determine the best option for the actual window. At one point I considered a plexi-glass type material, but it was really expensive – we’re talking $57. Instead, we opted to go with a window insulation kit that cost a little under $5. It installed very easily, by sticking the plastic round the window area with the double sided tape provided in the kit and then using a hair dryer to tighten it. The effect was exactly what we were looking for- it looked great, especially for the price. 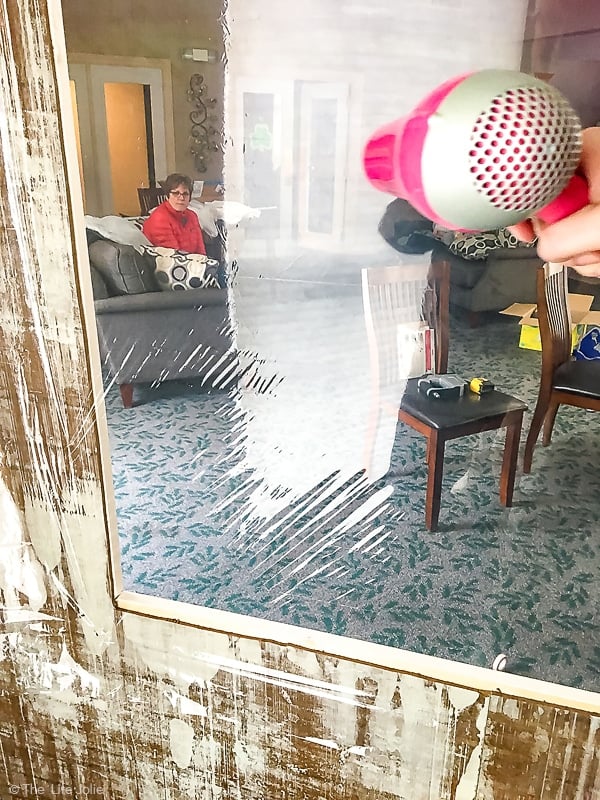 This was the most complex part of the storefront. We knew we wanted a striped awning with scalloped edges to hang off the building. We purchased some basic duck canvas from Joann’s fabrics and measured out how thick we wanted the stripes. We knew our canvas would be 8 ft. wide and decided on stripes that were 6 in. wide. 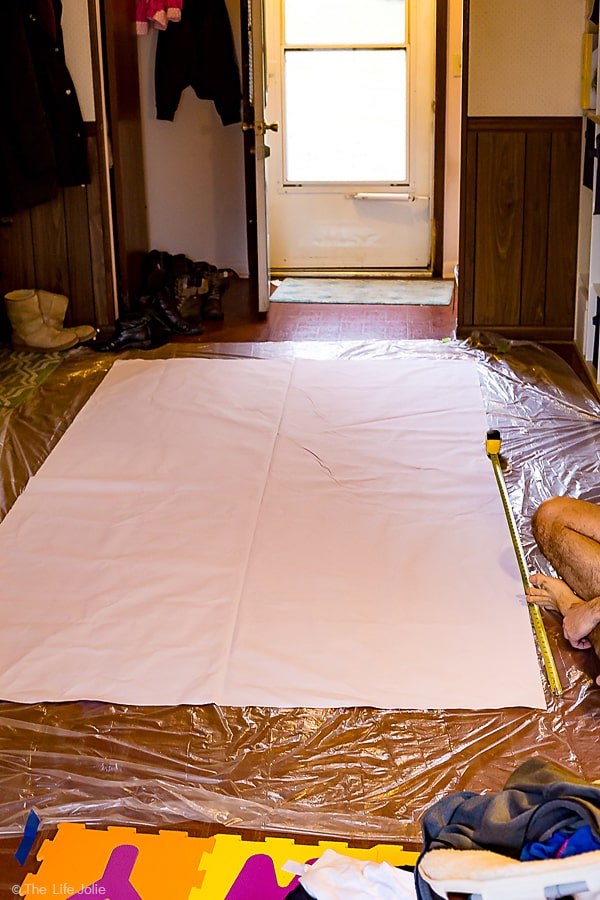 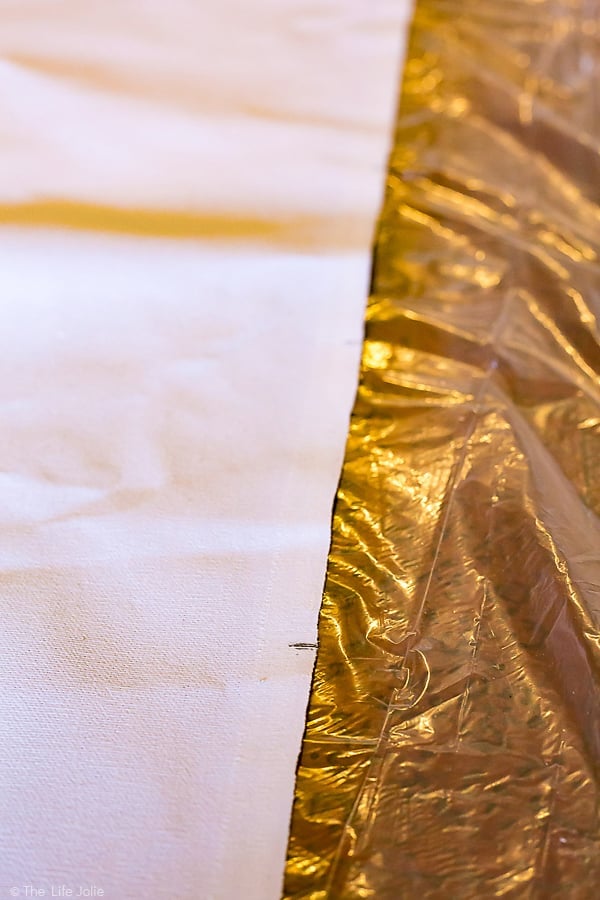 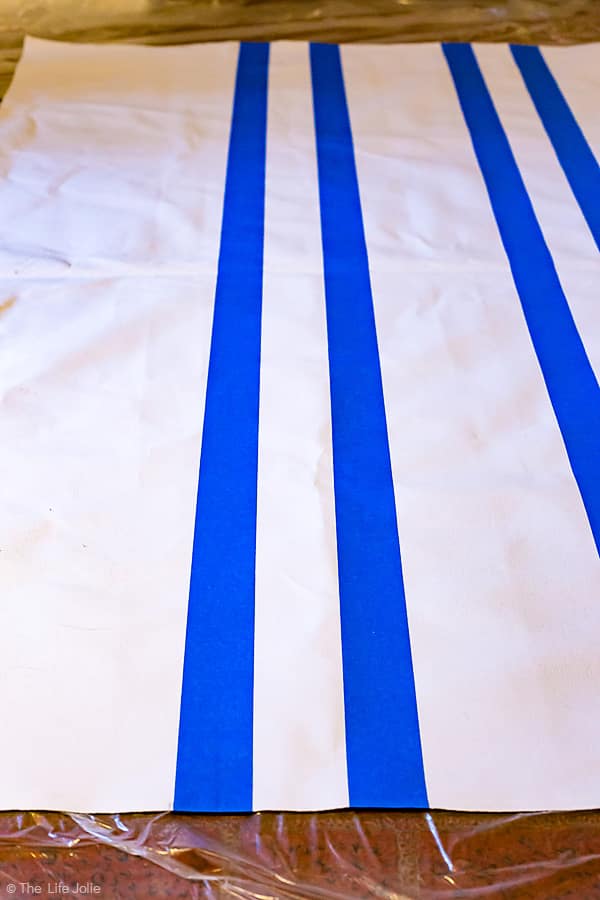 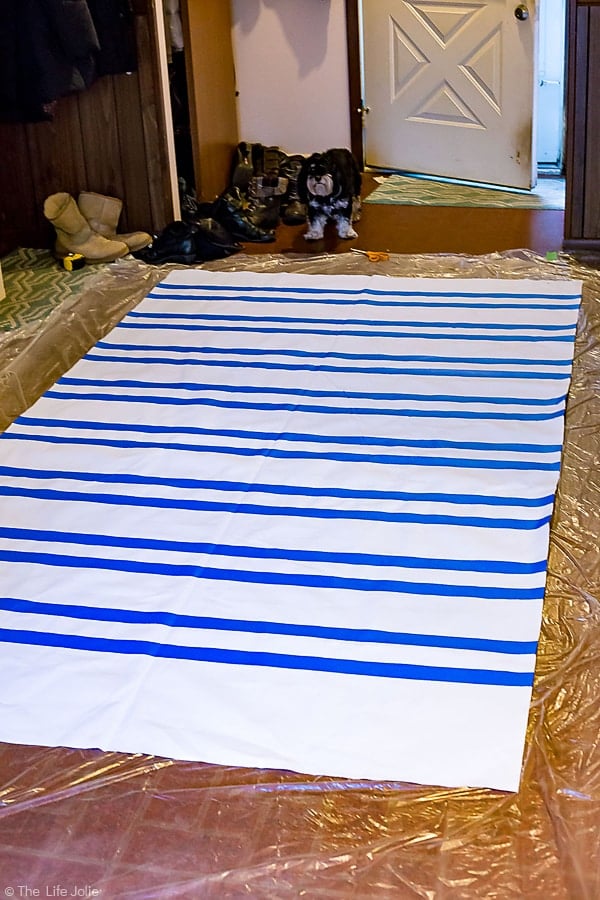 Once we measured and taped off the stripes, Jessy traced and cut the scallops. She did this using a bowl that measure 6 in. diameter and tracing the scallop shape and then carefully cutting it. 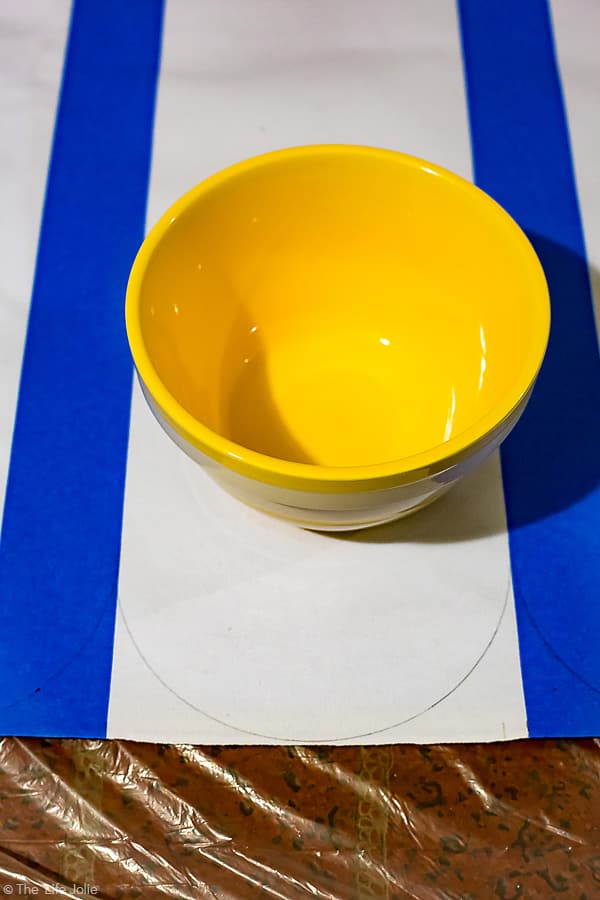 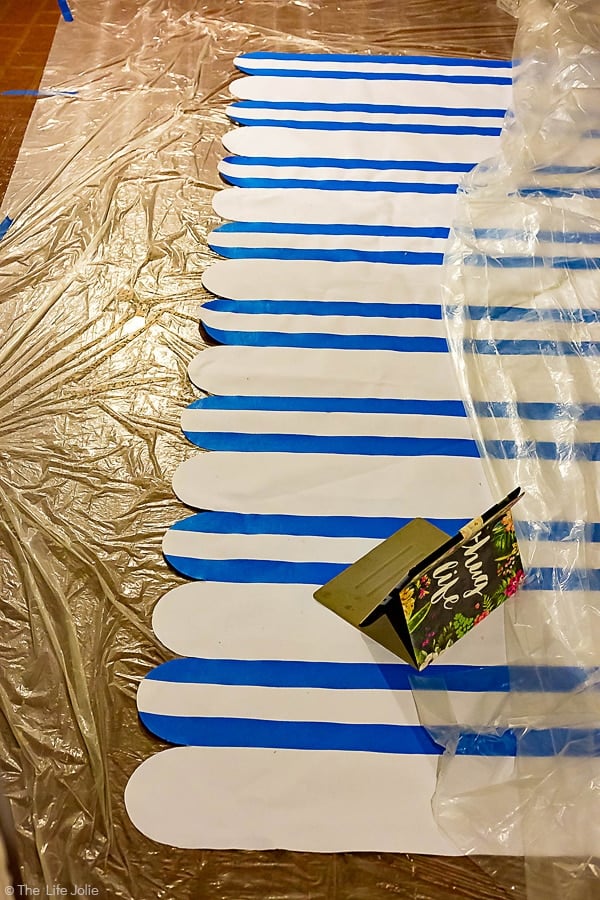 Once the scallops were cut, we (and I actually mean I) painted the mint colored stripes. Make sure that you paint the correct sections, otherwise you’ll end up with two colored stripes next to each other. 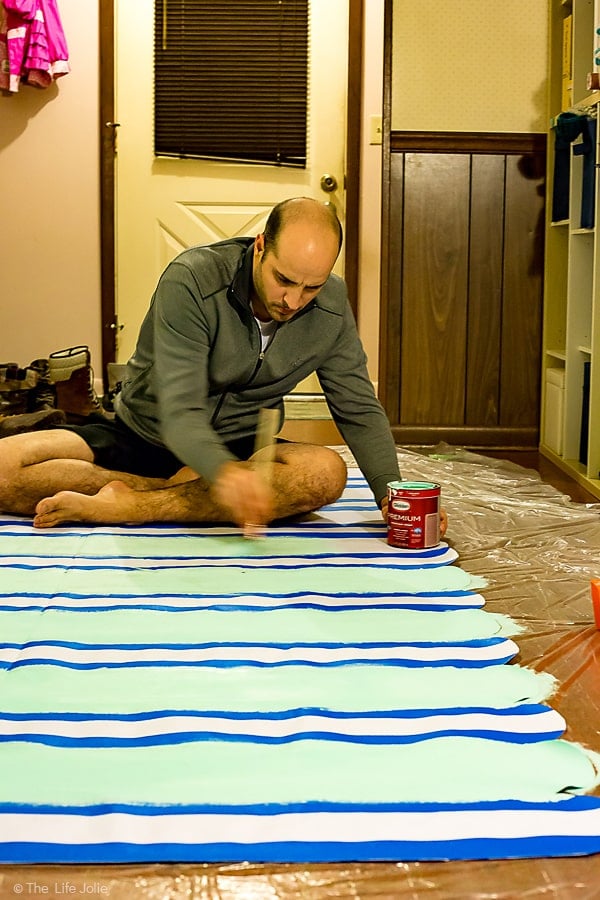 The plan was to have the awning hang off the front of the storefront. I had to make sure it didn’t weigh too much, otherwise the facade may start tipping forward. I used the 1 in. x 2 in x 8 ft. Furring Strip Boards to build the frame of the awning. This wood is thin enough to keep the weight down, but sturdy enough to support the canvas.

I used my staple gun to attach the awning to one of the furring strip boards at the point that we wanted the rounded ends to hang down. In order to transport the canvas, this is the only prep I did for the awning prior to leaving our house.

I planned to staple the canvas to a board running diagonally off the wall that would create the slope of the awning running away from the building. I also used furring strip boards for these. The challenging part was deciding how to have them easily hang off the wall at an angle. I decided to use a combination of hinges and leverage. I’ll explain this more in depth later in the construction of the storefront.

Jessy designed a sign on Canva and had it printed at Staples. She used this chart to figure out what size image to design to make sure the quality was high enough that it wouldn’t look pixelated. The sign was 18 in. x 24 in. She also picked up some Airhead Bites at the point of purchase – and I’m still craving them today.

We had the party in the club house at an apartment complex, so we only had access to the space for a limited time. My nail gun, power drill and my mitts were the tools of choice in the setup. Once we loaded everything into the room, we put it all together as follows: 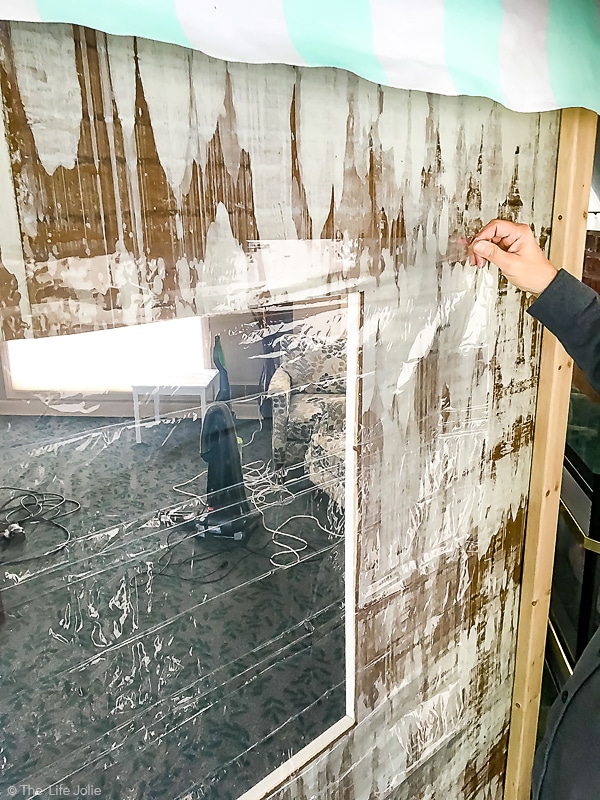 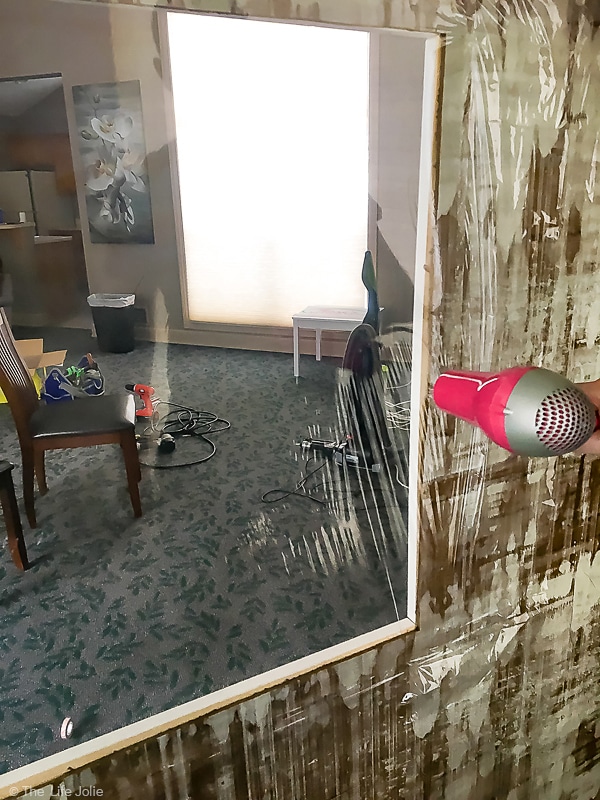 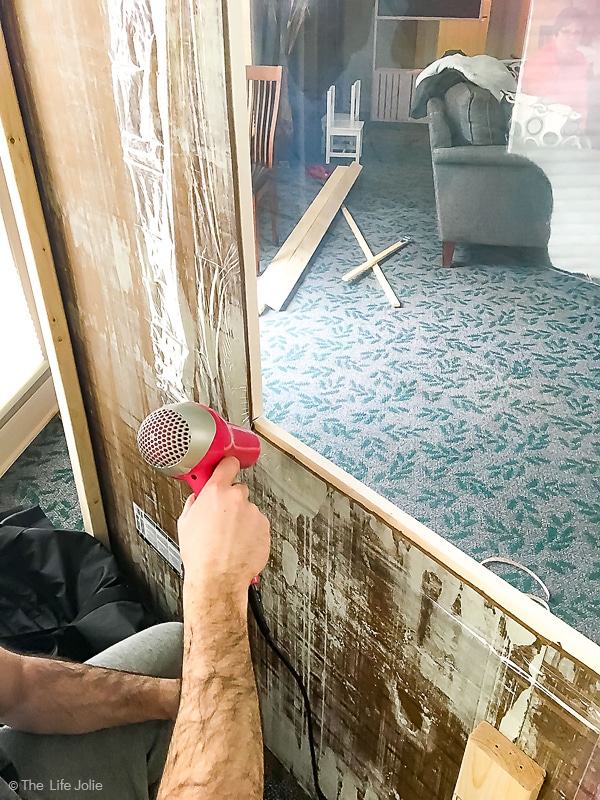 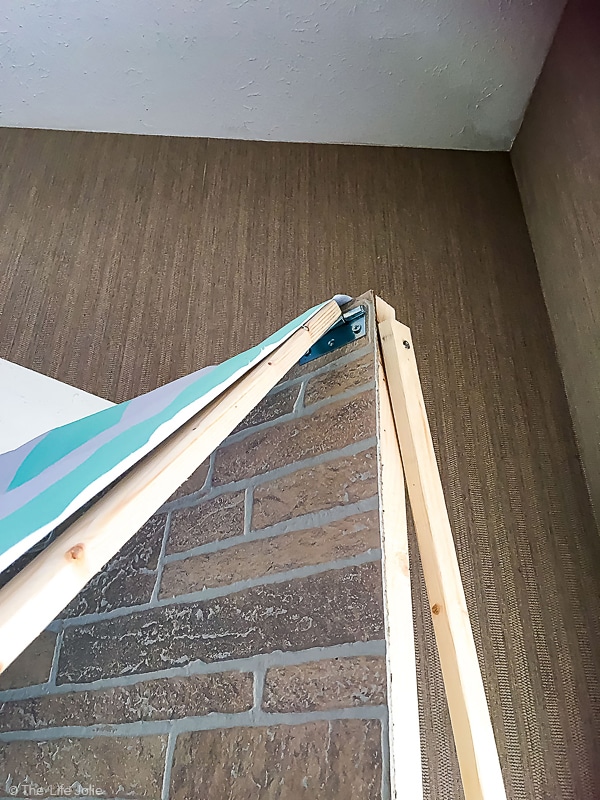 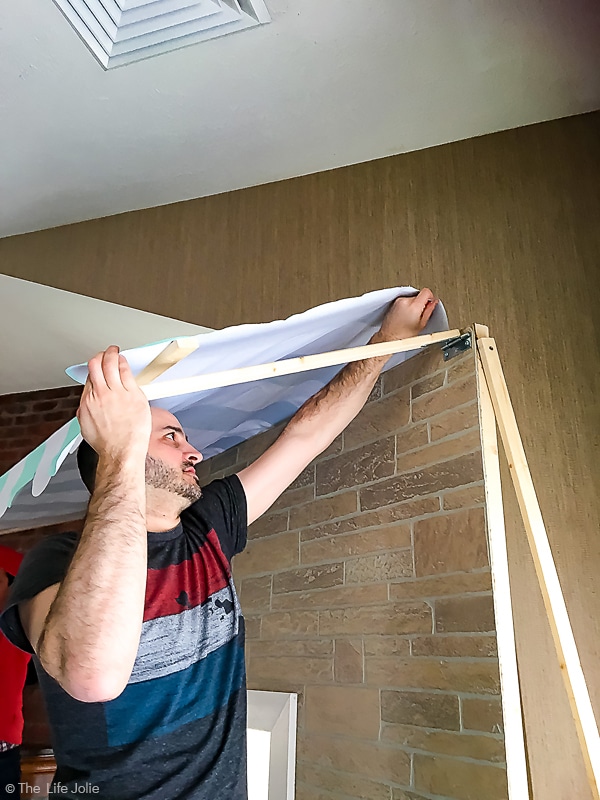 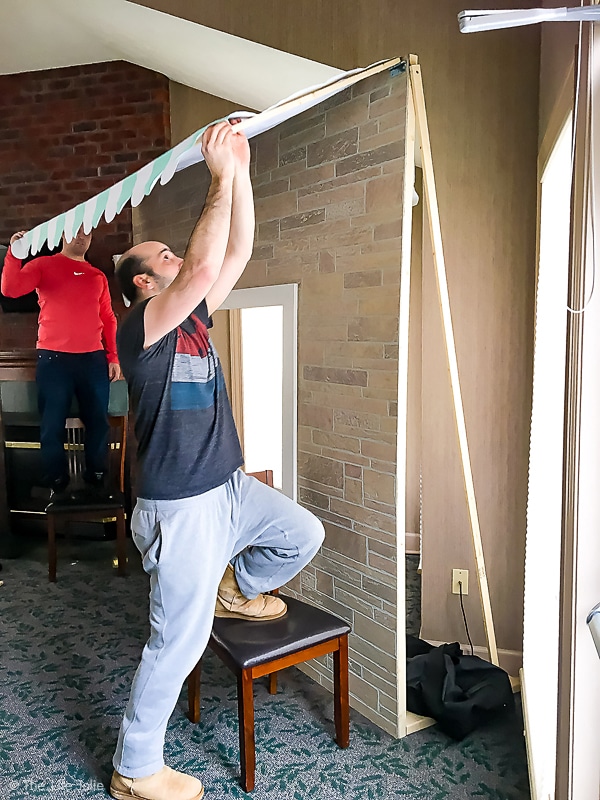 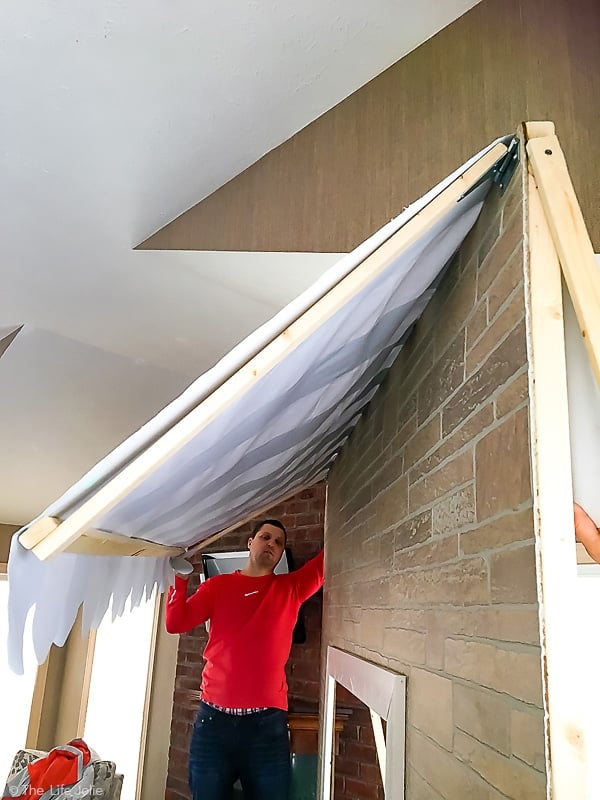 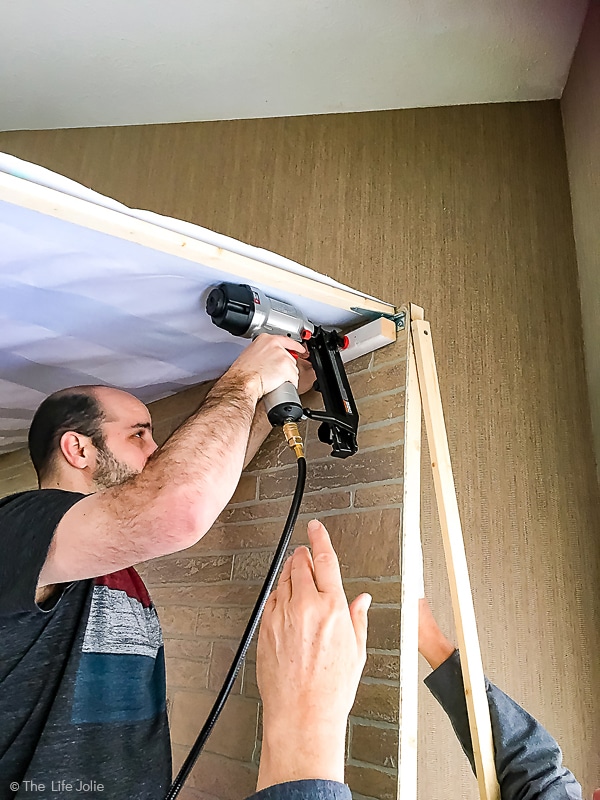 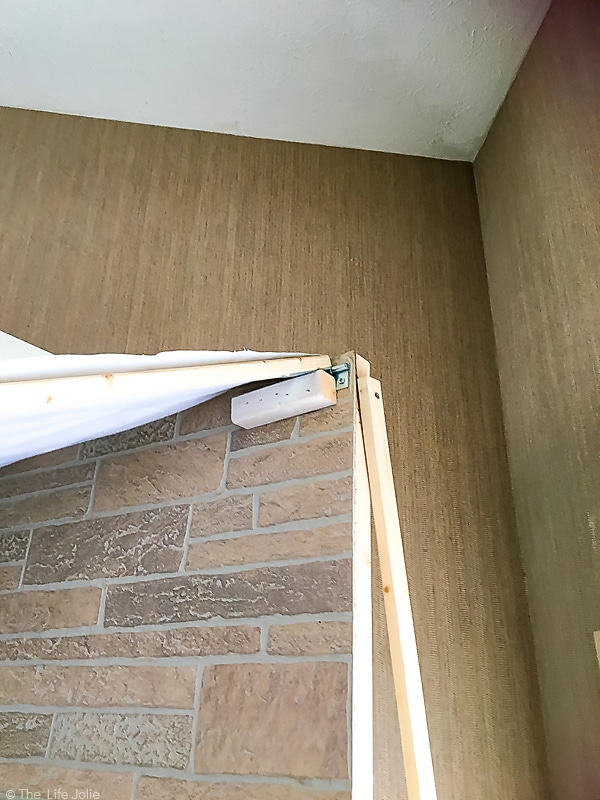 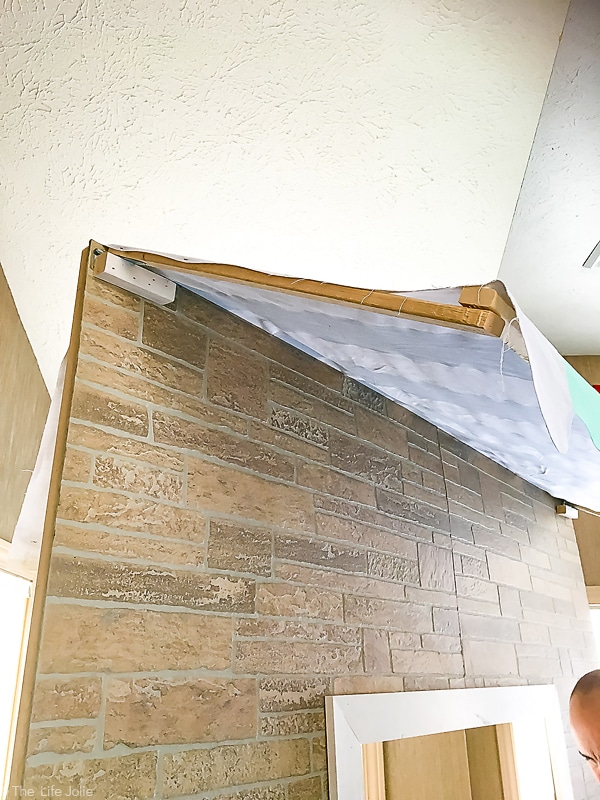 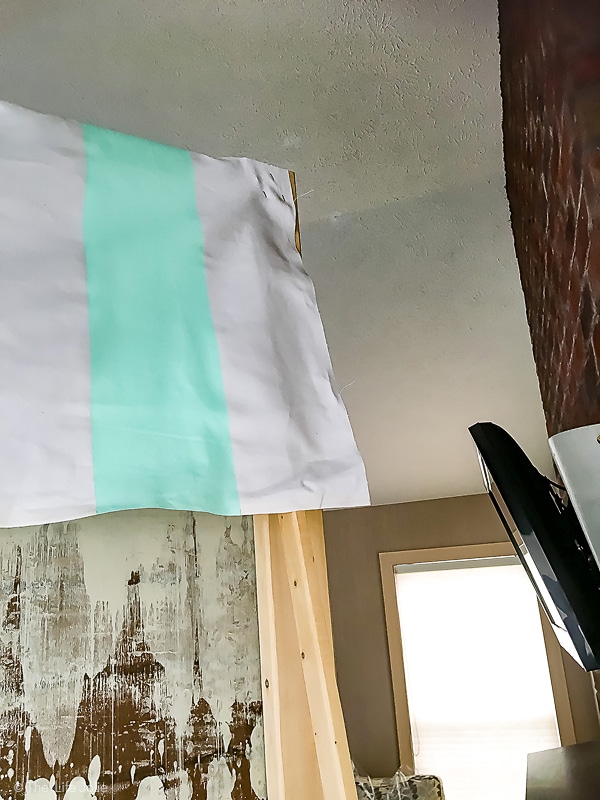 Overall we’re very happy with how this project turned out! It definitely had the “wow-factor” we were hoping to achieve and wasn’t terribly difficult to put together. J originally talked about adding flower boxes near the window but we ultimately decided against it in favor of making the dessert table the center of attention.

Other easy kid projects include:

You can find a full index of my projects here. 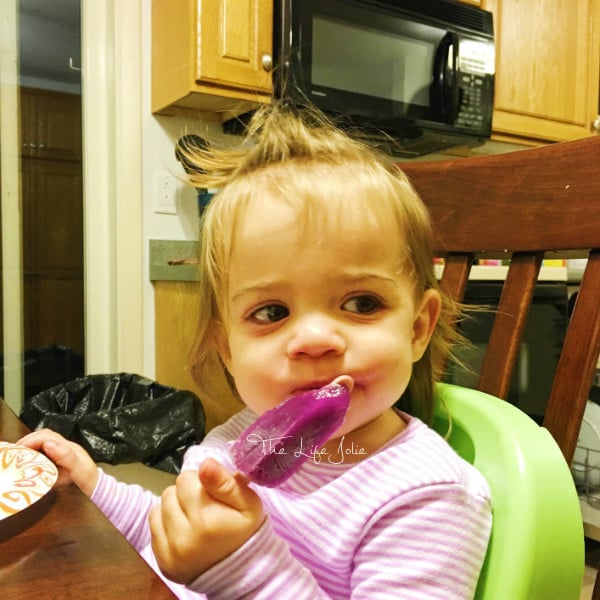 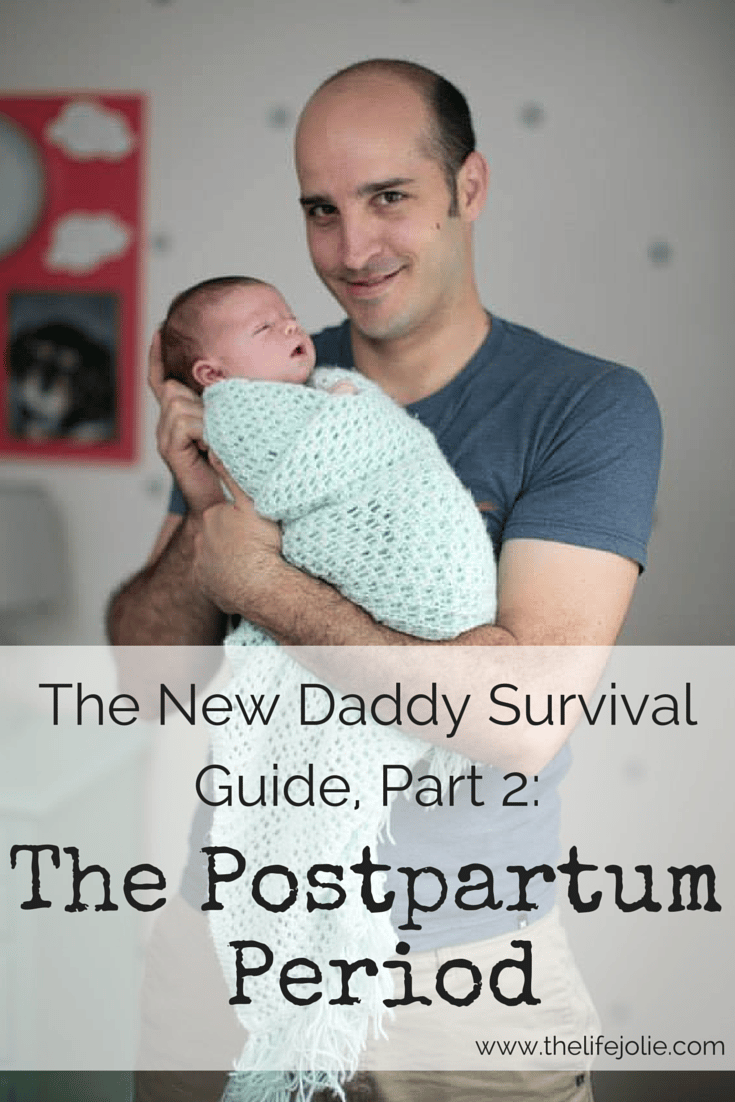