Remember how I mentioned in my Postpartum Survival Kit that Padsicles saved my life (and my Lady Garden) after I delivered my babies? Well I finally got off my butt and put together a post for all of you soon-to-be and new mama's out there!  Because I think this DIY Padsicle will make your postpartum recovery a bit more comfortable! 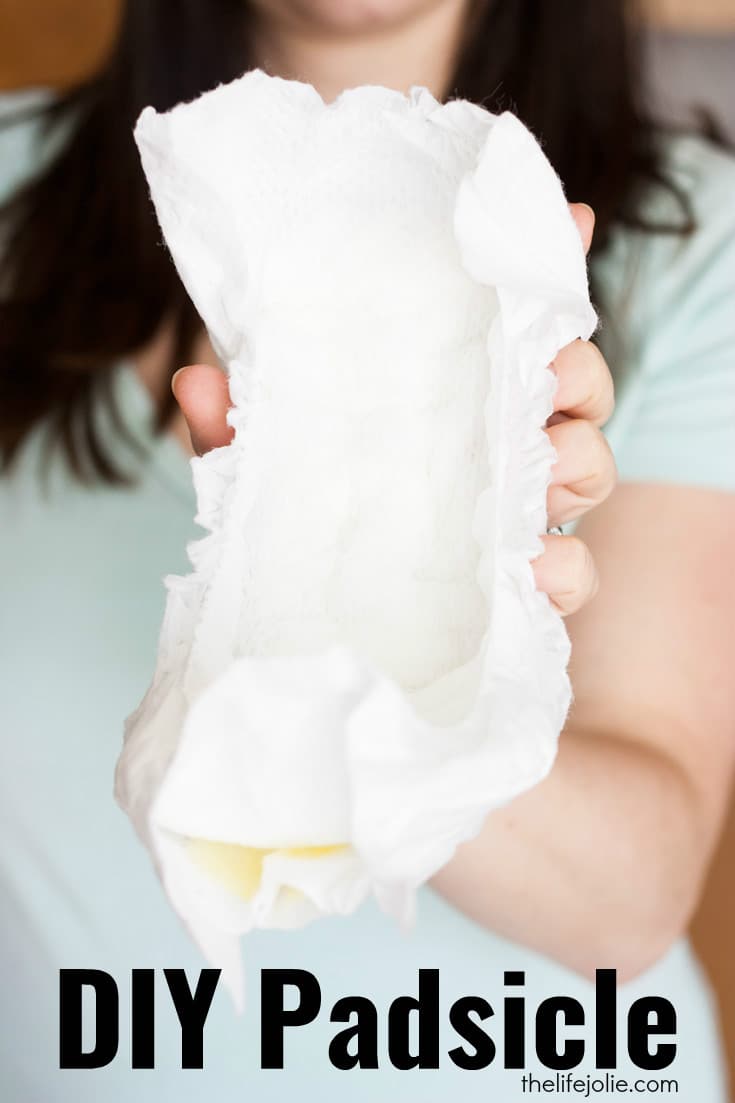 The first thing I did was a little experiment. At the hospital, the nurses were stuffing size one diapers

with ice. This worked beautifully because the ice was that amazing hospital ice that soft, small and rounded at the edges. So you don't have to worry about any sharp corners digging into your business. Unfortunately, that fantastic hospital ice isn't readily available in our home. So I grabbed a pad and a diaper and did a little experiment. I figured I would see which one would be a better vessel for the water and my findings were highly scientific.

I diaper I used was a size one. I'm sure these would come out just fine if Newborn size diapers are what you have. I only have size one diapers because we didn't actually buy newborn diapers this time around. I tend to birth 8lb.+ babies and they are only ever in newborn diapers for a few short weeks. They also only use size one's at our hospital as well and they fold the front over so as not to irritate the belly button stump.

I put one cup of water into both vessels and popped them into the freezer for a couple of hours. It was very evident to me, even before they went into the freezer that the diaper would be the winner because the water seemed to flow off the top of the pad, and only absorbed a portion of it. Once I removed them from the freezer, my hypothesis was confirmed. The diaper absorbed and held the water beautifully. It was also much more malleable which so it would form to your body in a more comfortable way.

Here are some directions for how I made these DIY Padsicles:

I found these super easy to make and pretty comfy to wear (as comfy as anything will be at that juncture!). Some people even put Witch Hazel

onto them before wearing them but I never tried this, so no guarantees on that. Use them at your own risk.

I would also encourage you to be careful about combining Dermoplast

with these. Apparently, someone at my hospital combined the two which resulted in some really, really cold effects that were bad enough to make the hospital limit the amount of Dermoplast that they will even give you (one can per person, but I had the cool nurse who slipped me an extra can!). This indicates to me that the person put a TON of Dermoplast on with the ice pack. I used them together with much success after A's pregnancy (and only added a small spray of the Dermoplast with the Padsicle) but the second time around I alternated between the two instead. Do what's best for you, but like all things, use common sense if you decide to combine them.