As you may remember from this post, J and I decided we wanted to install a simple paver patio as a much needed face lift for our backyard area. I could not be happier to report that we did just that (and by we I mean J and his Dad did just that, because I'm just not that talented!). I won't lie, when I went online and looked up various directions and stories of people's experiences installing these, I was pretty intimidated. We definitely had a few conversations that began with me saying "are we in over our heads?" and ended with J saying "I've got this." In the end, like everything else, it worked out and I'm pretty much in love with it! Here are a few thought's from J on this project: 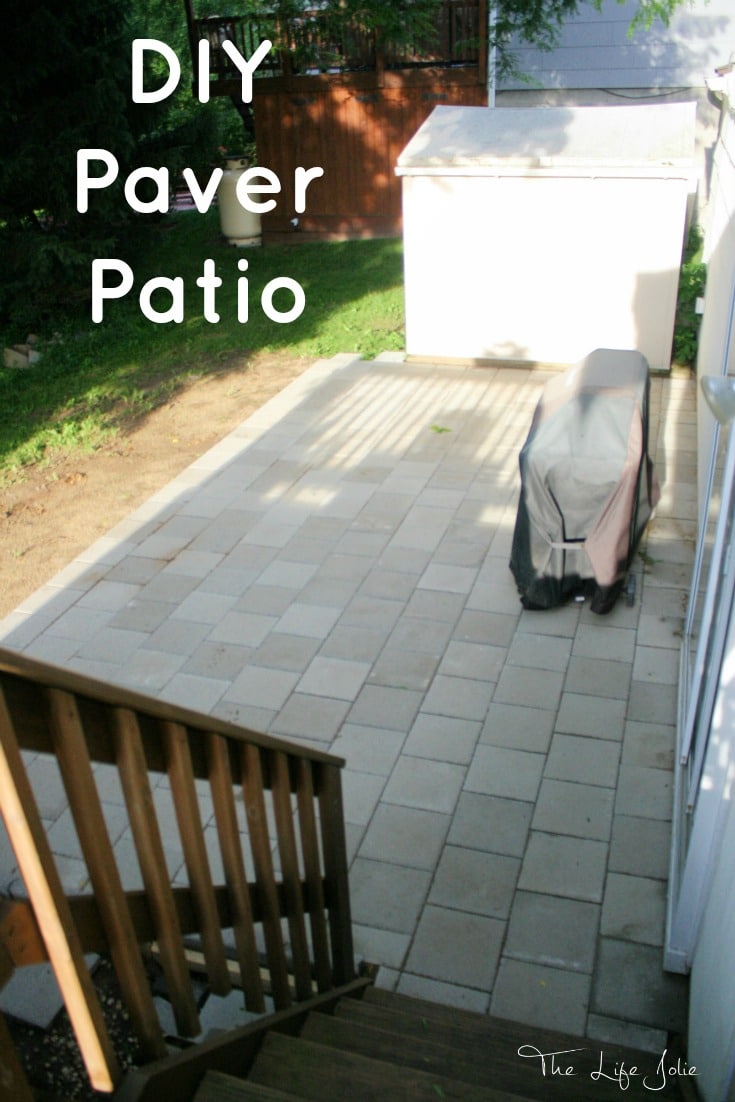 When we moved into our house, I knew I wanted to focus on the interior for the first year. I told myself that work on the exterior could come in year two. As summer approached, we discussed the things we wanted to accomplish on the outside of the house. One of them was to create more useful space in our backyard. With A growing quickly, we want her to be able to play and grow in an outdoor environment.

After some research, we agreed on building a paver patio behind the house. Several friends convinced me that it was not that difficult of a task and a lot of research helped me believe that. Some tutorials I saw online made it seem super easy and others made me wonder if I was in over my head. In the end, it was not that bad, but do not underestimate the task at hand. I could not have done this without the help of my father and will always look back on the time we spent together building this and smile.

The project can be broken down into some simple steps. Rather than give you a step by step tutorial, I want to describe an overview of what I did and what I learned about each part of the project along the way.

Before we bought anything, we measured out the space and determined how large of a patio we wanted. You will need to do this in order to budget properly. We ended up deciding to build a 22’x14’ patio in the space between our shed and the raised deck. For the mathematically challenged, that’s a little over 300 square feet. The paver squares we planned on using were 1’x1’. So I needed 300+ pavers.

Purchasing the pavers was a project in itself. The paver stones weighed 17.5 pounds each and I did not want to overload my father’s truck, therefore it took me about 6 trips to The Home Depot to obtain all the pavers needed. I ran into the same issue when purchasing the paver base and leveling sand. Let’s just say the staff at The Home Depot recognized me by the end of the weekend.

The Home Depot does have a service where they deliver these materials for you, but you will pay for it and if you need as much as I did, you will pay extra for the high weight being delivered. I considered having it delivered, but figured I’d rather save the $100 or so. 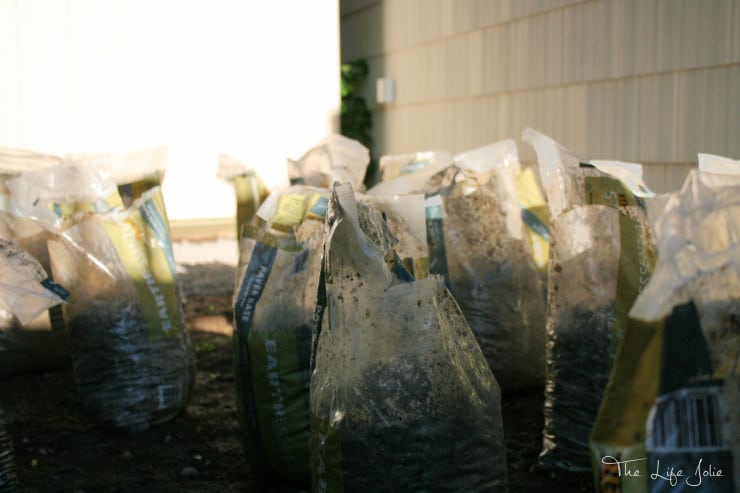 You will need to clear out the area before putting anything down. The space in our yard had an old koi pond that clearly hadn’t been maintained in years. I filled that in with dirt last fall. I used a shovel and a hoe to clear our any vegetation in the area. Luckily for me, there really wasn’t much – it was already pretty much a patch of dirt.

The most important part of prepping the space, in my opinion, would be to make sure it is sloping properly. Living in Western NY, this became a huge priority for me; the patio would need to be able to handle the inevitable snow that will come in the winter. The ground already seemed to slope away from the house, but to make sure we had the grade correct, we picked up some Line Levels

(two of each, so 4 total). Honestly, buy a few of these. It will save you time later in the process.

We used stakes to rope off the exterior edges of the space and secured the line levels to the string to help level out the area, but still have it slope away from the house just enough to make sure water would run towards the yard. There were instructions on the packaging with the line levels about how to level it based on what kind of slope you want.

Laying Down the Base

This is where I really underestimated this project. The math for the paver stones was simple. I knew the square footage of the patio and it was easy to determine how many paver stones I needed and how much it would cost. I felt like the cost of this project skyrocketed as I purchased more and more paver base and leveling sand. Everything I read about base and sand seemed to vary so much – I really did not know how to budget for this. 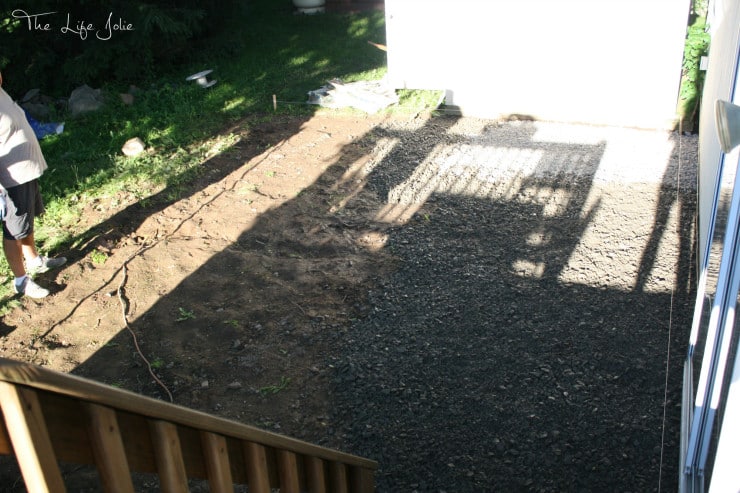 I ended up buying paver base and dumped it out in the space that I cleared out. As we spread out the bags we purchased, I was able to begin to get a better understanding of how many bags it would take. I knew I could have tried to cut it short a little and have a thinner base, but I didn’t want to half-ass this and be dealing with issues months down the road. The bags cost just over $4 each. The price was about the same for paver base and leveling sand. By the time we covered the entire area, I had gotten 70 bags of paver base and 90 bags of leveling sand. 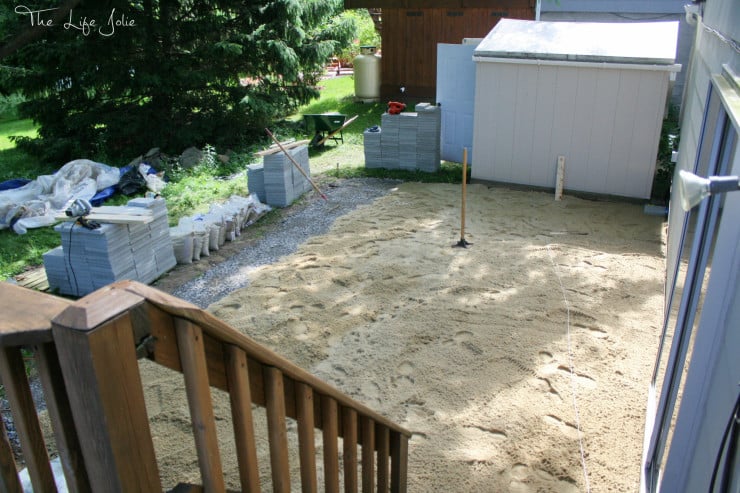 The base was a two-part process. The paver base consists of small chunks of rocks. We spread that out and then compacted it into the ground. If you are working on a small space, you could get away with just using a Hand Tamper

to manually compact the area. With 300 square feet, you definitely want to rent a power tamper to get this done (I rented ours from Home Depot). It cost me $77 for 24 hours. Add $7 for insurance on it because, hey, I had never used one. I’d much rather spend money on this than having the pavers delivered. The hand tamper really came in handy for the edges though.

Once the area was compacted, you can dump the sand over it all. I thought that the process of leveling the sand was the trickiest. All the videos and tutorials I saw online made it look so easy by just dragging a 2x4 over the sand. Maybe I’m just an idiot, but we couldn’t reproduce that "easy" process. 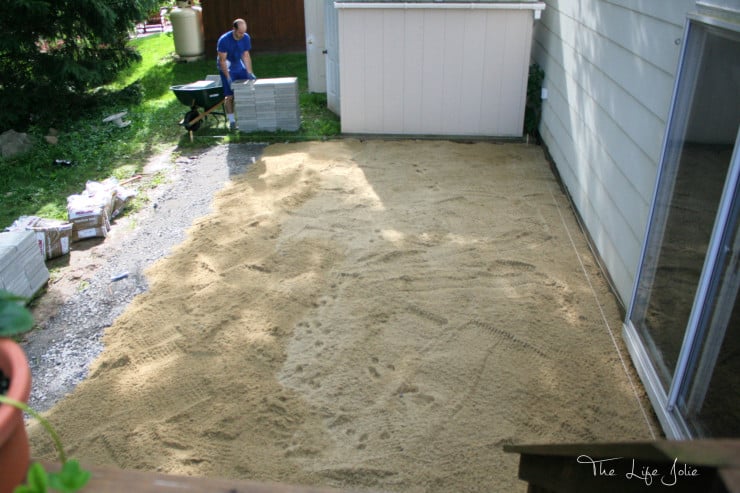 As I mentioned before, we knew we wanted to make sure the patio sloped properly, so we made sure each stone was lined up properly as we placed them on the sand.

We used the hand tamper to lightly compact the sand before placing the paver stone on it. Once we had the paver in place, we used the line levels to test the slope. We were diligent on this and made sure every paver was lined up properly. We set the levels right on top of the paver. The blue level showed me how even the paver was and the yellow level showed me if the slope away from the house was correct. We could have raced through this process, but the extra time we put in made a big difference in the finished product. 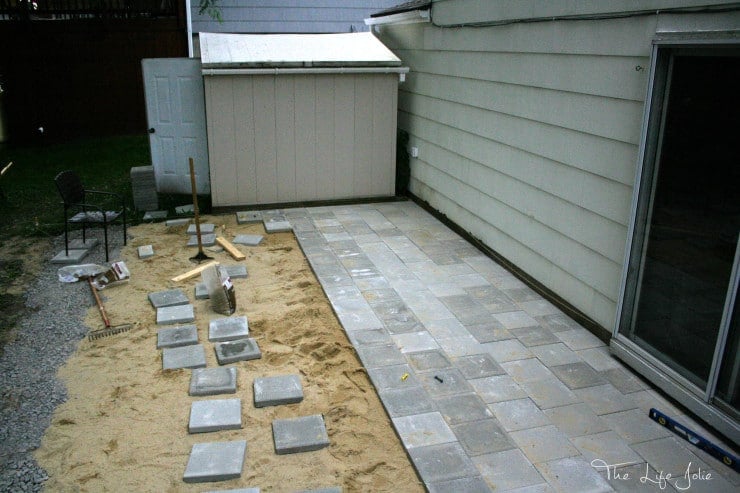 Once all the pavers were in place, we spread some Jointing Sand

You will then hose down the patio and the water will help the sand cement the tiles together. Make sure to sweep any excess sand off the top of the paver stones before hosing it down, otherwise you will have sections of sand concreted to the top of your paver stones. 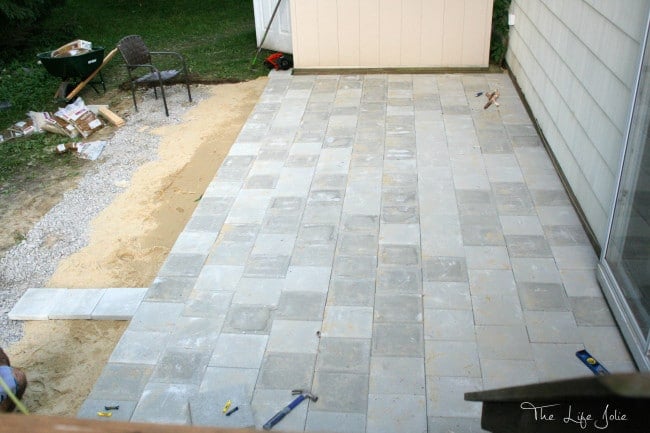 Looking Back on the Project

I look back at all the work and am thrilled with how the patio turned out. We ended up having it not extend out into the yard as much as I had planned because it reached a point where there was a much steeper slope and it made more sense to end the patio and eventually grow grass there.

There are some things that I would do differently, but in the end I think it was a great success. There are still some final touches that I plan on doing, but the majority of the work is complete. If I could do it all over again, I would: 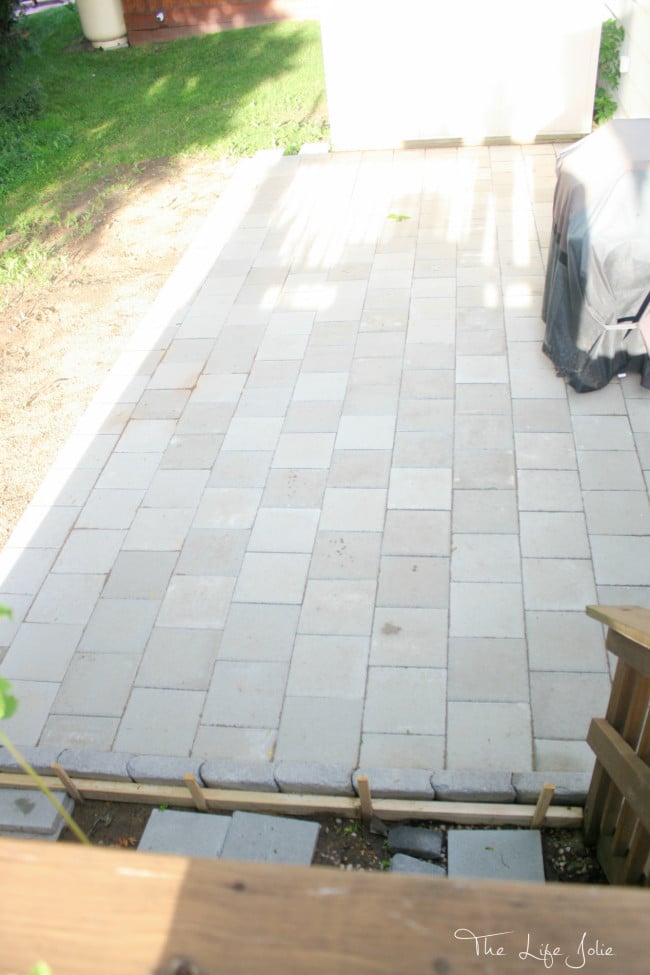 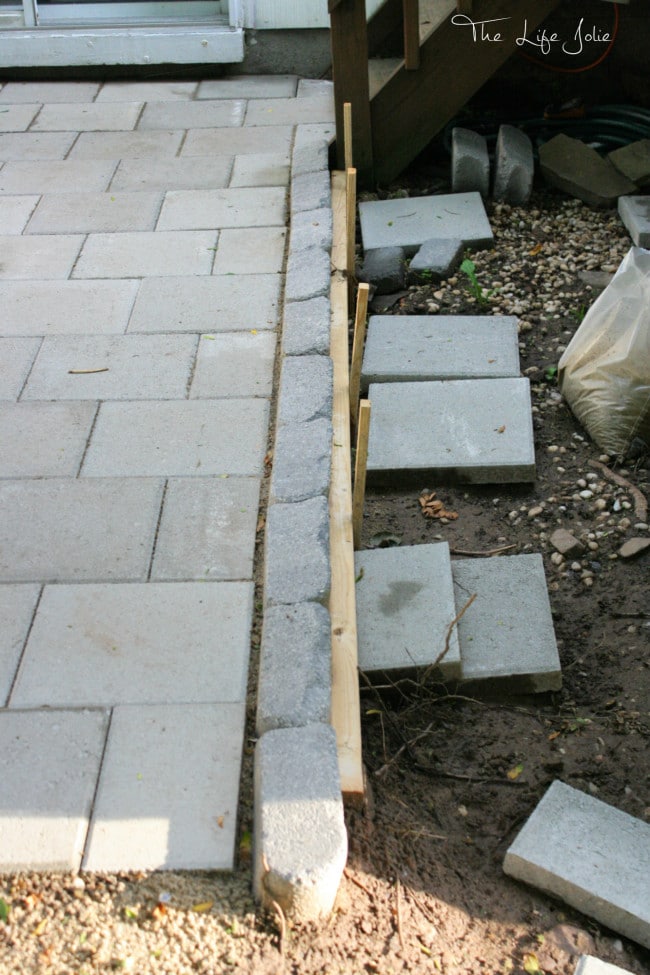 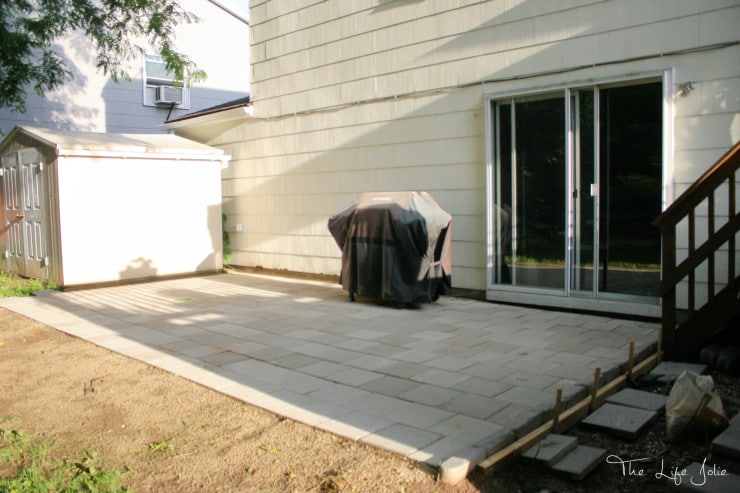 I cannot complain too much with only coming up with two items I would do differently. Now it’s time to get my buddy’s hot tub moved into the cozy spot in the corner of the patio so I can start enjoying it more!

What projects are you working on this summer?