I hope everyone had a nice Halloween. Ours was excellent, but super busy. I wasn't able to get a ton of photos but I wanted to give a quick recap of our family's Halloween. 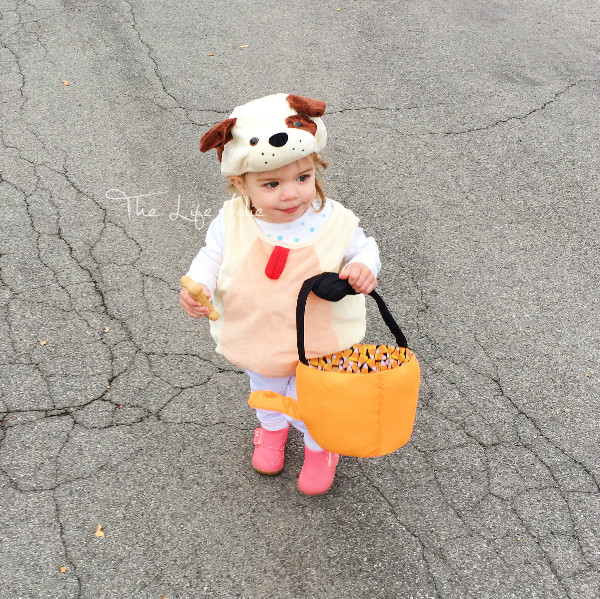 A woke up early and we did our usual early Saturday morning routine of breakfast and grocery shopping to miss the crowds. We met my parents at Panera Bread because Baby Bubbles loves their Spinach and Artichoke Souffles (and so does A and I!). After we got home, we put A down for a nap and I made a quick Target run.

A slept a little longer than planned so after she woke up, we scrambled to get out of the house. Our first stop was to my Grandma Eve's home for lunch. She lives in a fantastic independent living center that has really great amenities but still allows her the independence to enjoy her own apartment.  They have a Bistro that is open for lunches and they do a pretty good job with their food.

We opted for a dog costume for A this year since she loves dogs so much. I initially had my doubts because for the entire week before Halloween, A refused to let us put the hat on her. She's not really used to hats but I couldn't resist the $11.99 price tag on this adorable costume at Costco (I just can't justify spending $40 for a costume she'll wear once on our current tight budget). To our surprise, when we got to Grandma's and put the costume on her, A gave us no problem about wearing the hat! 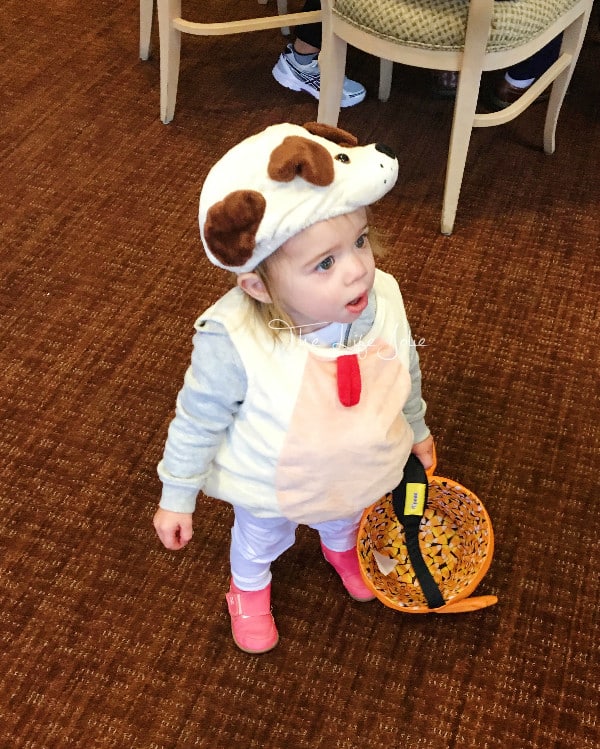 We made our way into the Bistro, which was full of other residents, and they all got such a kick out of A walking in with her dog costume and her pumpkin basket. I'm pretty sure Grandma was thrilled. We enjoyed a nice lunch and visited with Grandma. A was a little stir crazy before the food came, but nothing out of the ordinary for a one year old. She did a good job of eating but wasn't too sure about the cookie Grandma gave her (though I thought it was delicious!).

After Grandma's, we headed over to my parents to get A down for her second nap. Once she woke up, we got her into her costume once again and took her to a couple of houses to see the neighbors that my sister and I grew up with. 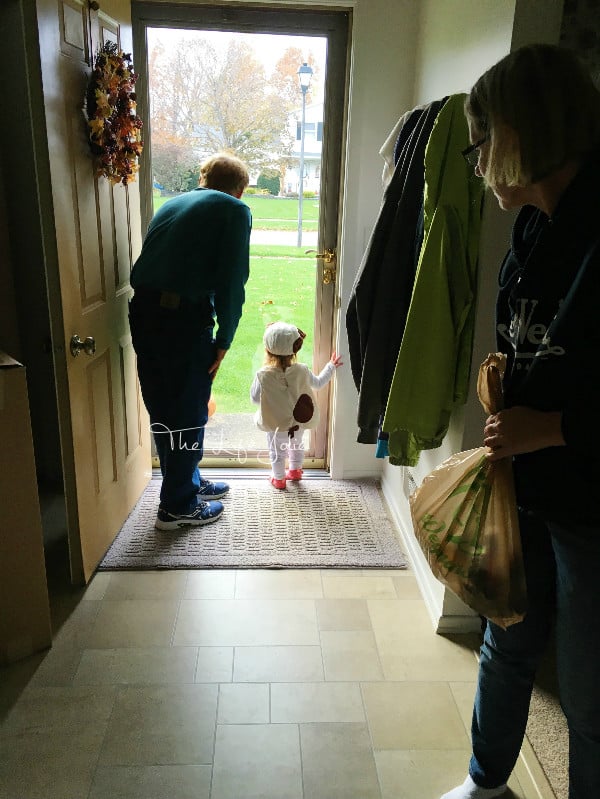 While I'm pretty sure A didn't actually understand what was going on, she seemed to have fun walking to the house and putting her hand in the bowl to pick a piece of candy when her host would invite her to do so. I think she got a little too comfortable with that because a few times J and I had to say "Ok, Alice, that's enough." Pretty cute to say the least.

After that we headed back to our home to prepare for our trick-or-treaters. Once I get dinner simmering on the stove (the delicious Pork Stew that I posted on Monday- perfect for such a chilly night!) we headed out before it got too dark to take A to the couple houses of the neighbors we know. Once again, our gal had a great time, although I think the small amount of houses she went to was the perfect amount for her at this age.

Once we got back in, we enjoyed our dinner, handed out candy and face-timed with my in-laws. A had a pretty busy and fun day so when bed time rolled around she was happy to oblige and went right down (although I can't think of the last time A didn't go right down, she loves her sleep!). J and I tried to watch The Shining but we were also really tired so we ended up going to bed pretty early as well. 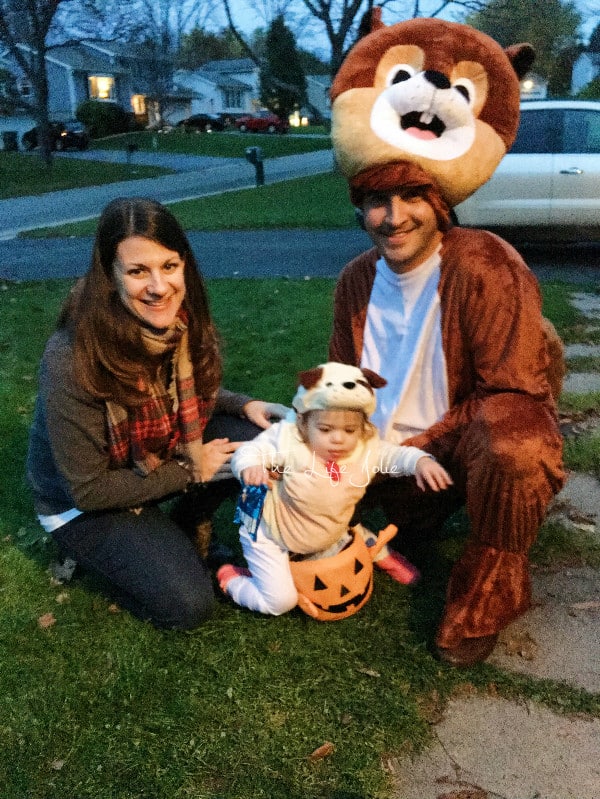 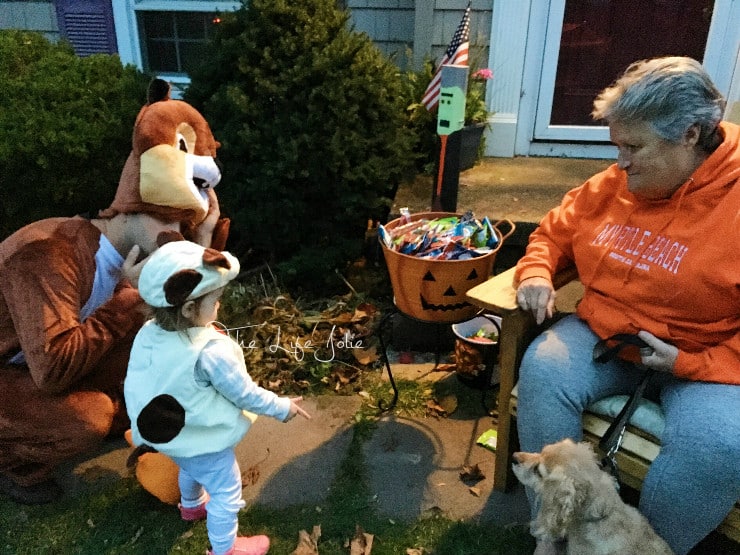 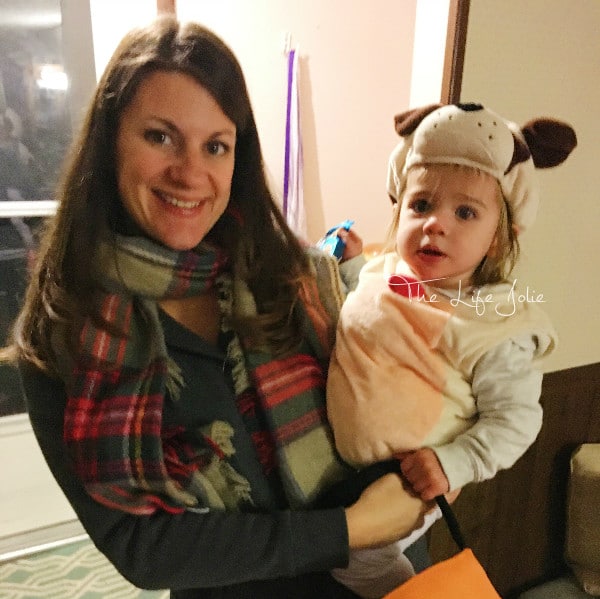 Overall it was a great day- A had a lot of fun and this makes me that much more excited for upcoming Halloweens because I know she'll love it even more when she is old enough to understand it (and when I get to see both of my girls trick-or-treating in their costumes!).

How was your Halloween?