Our trip to Toronto, Canada

As some of you may remember, I surprised J with U2 tickets on Father’s Day. Not only was this a show J really wanted to see, but it was a great opportunity for us to have a little overnight date and of course to go to the motherland (ie- Ikea). We had a great little trip and J’s parents graciously agreed to have a slumber party with A, so it was a win/win for everyone! Bear with me on these photos because I didn’t bring my nice camera. 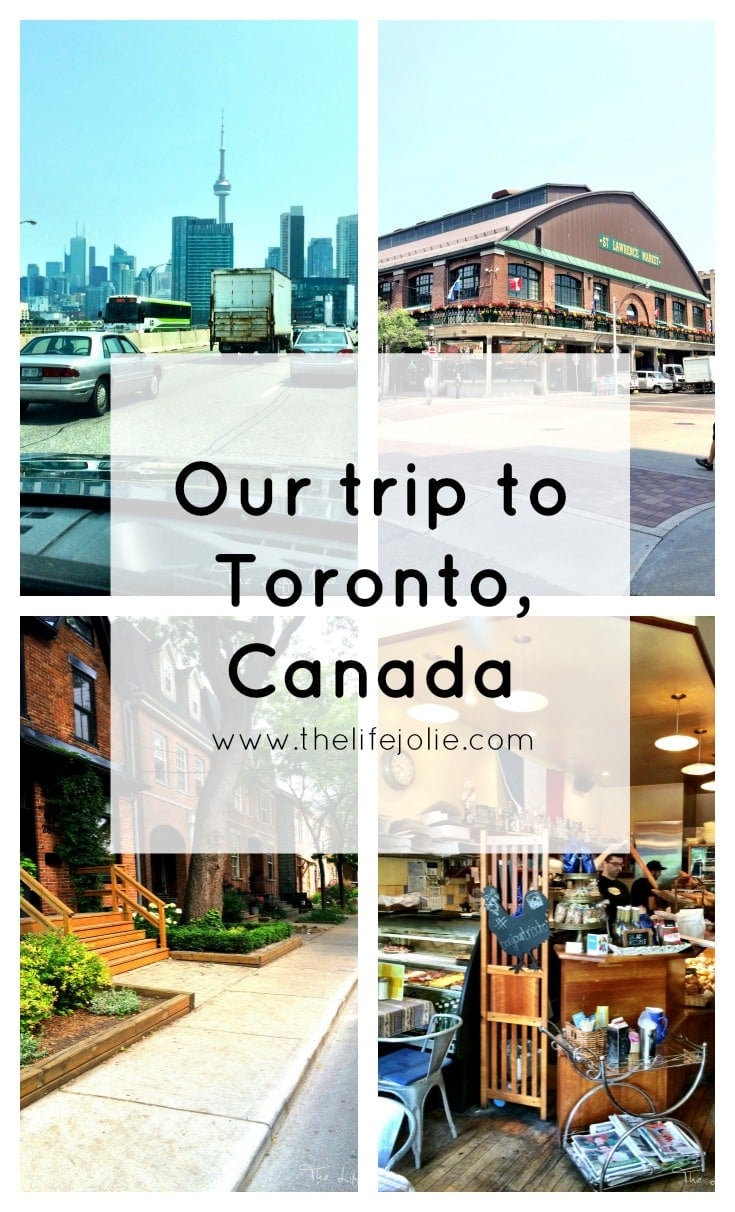 We left on Monday morning and had a relatively smooth ride to Toronto. I was a little a surprised by the fact that getting through the border into Canada was a bit more difficult than heading back into the US. In my many years of making this drive, it’s usually the other way around. Still, it wasn’t terrible. I think the border patrol guy on the way in was having a bad day. 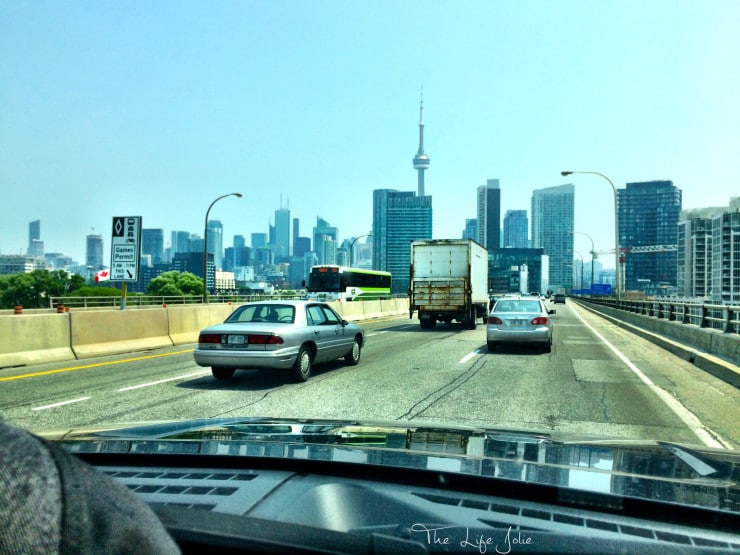 When we arrived in Toronto, we headed over to our hotel. We stayed at The Cosmopolitan because it was within a few blocks of the Air Canada Centre where the concert was being held. It was around 2pm and our room wasn’t quite ready. They agreed to hold our bags for us until our room was ready. So we wandered out in search of parking and food.

Being that we spent so many years living in NYC, we are no strangers to the sky-high costs of city parking. The first lot we checked out tried to charge $65 for the night which was definitely more than we intended to spend. Our car was too big to let the hotel valet handle (we borrowed his parents truck for Ikea purposes!). After driving a few blocks away, we managed to find a garage that a local guy told us was the cheapest in the area. He was absolutely right. Toronto Parking Tip- There are municipal parking garages in various locations throughout the city. You will know them by the green P signs noted below. It’s our understanding that these are your most cost-efficient parking options. We ended up paying around $24 for parking from 2pm until 9am the next day. J asked me to note that we could have left it parked until 2pm that day and still had the same price. Such a great deal and less than we had budgeted for! 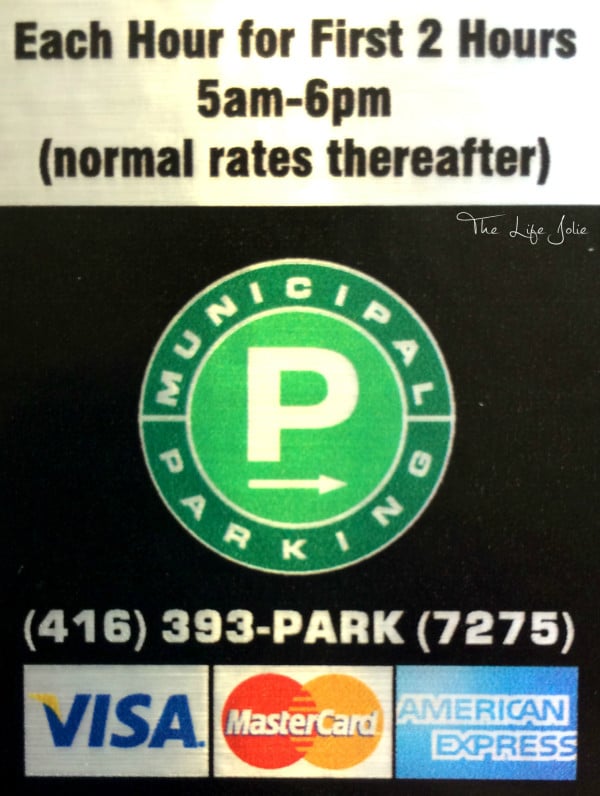 Once we parked, we walked around the neighborhood for a bit in search of a place to eat. It was a pretty cool neighborhood with tons of little restaurants and bars. I was bummed that the St. Lawrence Market was closed because it looked pretty sweet. We ended up opting to go to The Firkin Pub at The Flatiron. First of all, I was a little too excited to see the Flatiron building as it brought me back to my NYC days. It was definitely smaller than the one I’m used to but still made me happy. 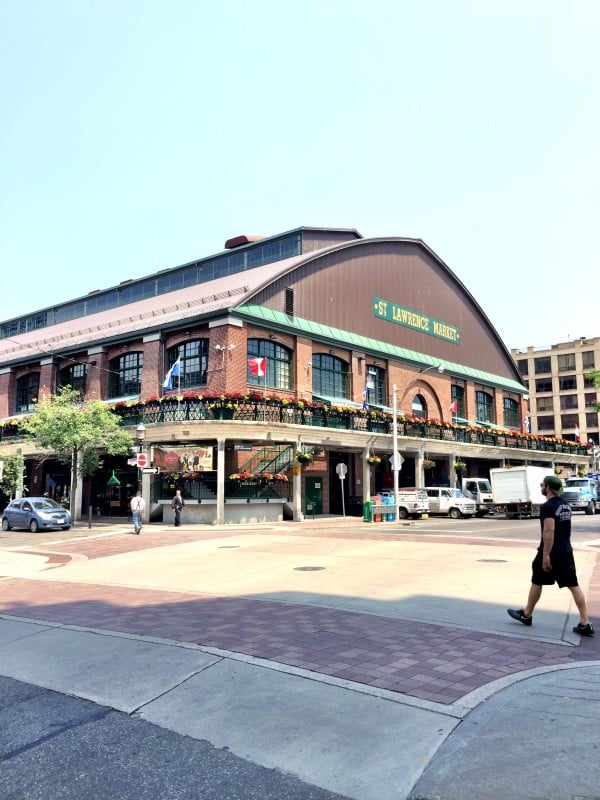 The real stand-out of our meal was the Fried Pickles appetizer. Be still my dear-little-pickle-loving heart! First of all, these weren’t the usual battered-and -fried, wimpy, dill pickle chips that you usually find on bar menus. There were dill spears.  We were really impressed that they managed to keep their crunch and that the breading was perfectly crispy. I also loved that there was a ton of dill in the breading as well as in the creamy dipping sauce. What can I say, I love dill! I’d like a couple orders to snack on right now! J’s burger and my Turkey sandwich were fine. Nothing ground breaking or amazing, but we were fed and happy. 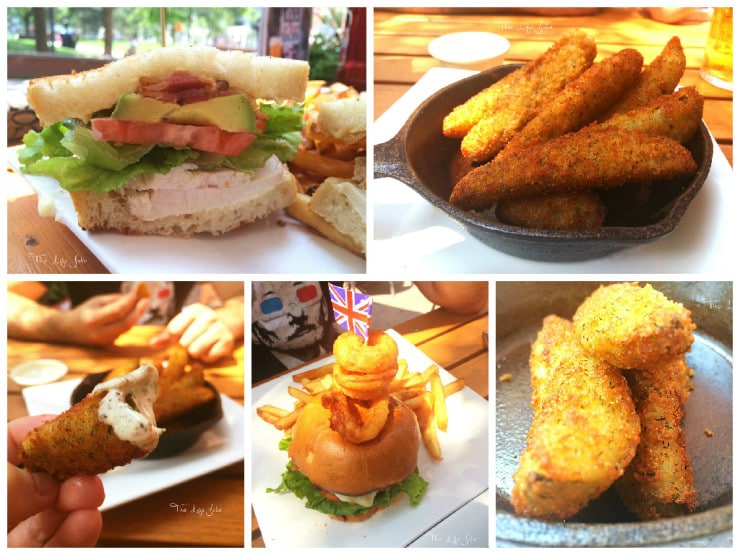 After lunch we returned to check into our hotel and relax and freshen up before the concert (I was exhausted from the heat and being up early). Our room was nice. It was compact, which was expected. I was surprised to see that there was a full kitchen and a decent view. We had a laugh about the fact that they offered an intimacy kit for purchase. I couldn’t tell you exactly what is in this since they didn’t exactly list out what was included but I’m super curious as to what that would include. We didn’t spend much time it the hotel and it was pretty clean. That’s really what was important to us. We also got a pretty good deal on the room. My only complaint is that we had a bunch of people in their early twenties in the room next to us and they rolled in around 1am and were shouting and vomiting quite loudly. But that’s not the hotel’s fault. I chose to ignore it.

We got to the Air Canada Centre a bit earlier than we needed to because I thought the show started at 7pm not 7:30pm. This worked out fine because we ended up just enjoying each other’s company and watching the place fill up. Our seats were way in the back. I didn’t buy the cheapest seats because I didn’t want obstructed view but pretty close! We were in the nosebleeds! J didn’t mind at all.

Honestly, they really went out of their way to create a show that was an awesome experience no matter where you were sitting. We could see everything pretty well. They had a huge, wide screen in the middle and at times they would have various images and video it. The cool thing was the band would also walk inside of it and at times you could see them in there as well. 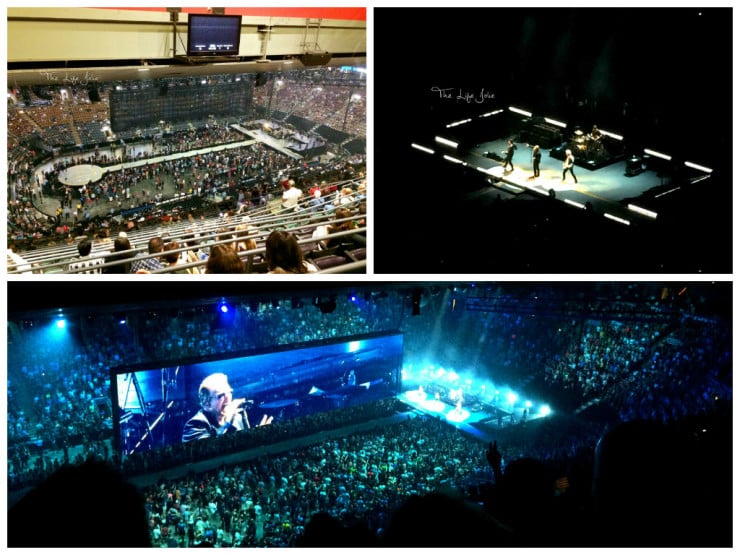 U2 puts on a pretty incredible show! I was so impressed with the level of musicianship and as a singer I could not get over how great Bono’s voice is. As you get older, your voice tends to change, and not always in a good way. His has held up beautifully! I also really liked how they interacted with the audience. At one point they pulled a woman up onto the stage who was wearing full belly dancing gear. Apparently, they had brought her on stage 10 years ago as well! They also pull up a group of guys who are in a U2 tribute band in Detroit. They asked if the tribute band was any good and then they passed the band their instruments and mic and let them play a song. This had to be one of the coolest moments for those guys and they were pretty good! This was a show I would absolutely see again and I know J was so thrilled to be there as well.

After the show we went to a local diner. It was a beautiful night so we ate outside. I don’t remember the name of the place, the food was only ok. Nothing special to  blog about. We then headed back to the hotel because we’re old and were totally beat. We’re officially no longer rockstars.

The next morning, we woke up early because babies put you onto a different clock (I don’t even know what sleeping in is at this point). We took our time getting dressed and eventually made our way back to the car. The plan was to get some food and head over to Ikea before returning to the states.

J had googled lists of good brunch places in Toronto and since we weren’t looking for a huge meal, we settled on Bonjour Brioche Bakery Cafe. Boy, am I glad we made this decision. This adorable little cafe was tucked away in a sweet little neighborhood. This was without a doubt my favorite meal of this trip. We got a lovely little table outside. I enjoyed an iced latte and a fresh tart of red onion, peameal bacon (NOT the bacon us Americans are used to but so tasty!) and smoked provolone. This was served with a lightly dressed salad of mixed greens and a big old hunk of fresh baguette with butter. J stuck with a chocolate croissant. I can’t being to tell you how delicious everything was. We may or may not have picked up a bag of croissants for my in-laws as well as a few loaves of that amazing baguette. I could have spent hours there sampling everything. Quick tip- this place is cash only, so bring cash. They do accept American money but you lose out on the exchange. American’s take note- the nearby ATM’s don’t work for our cards (which makes sense!). I wish that this bakery was near where we live. Although, I’d be a lot heavier if that were the case (worth it!). 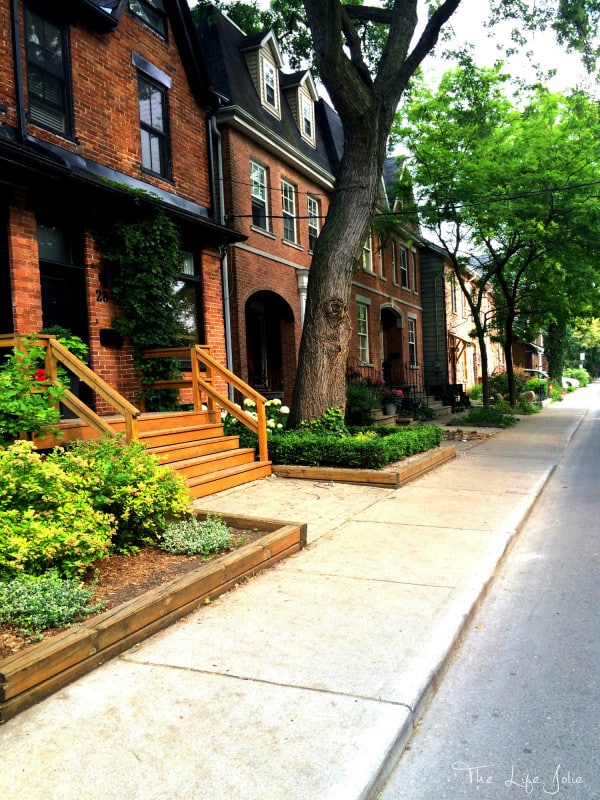 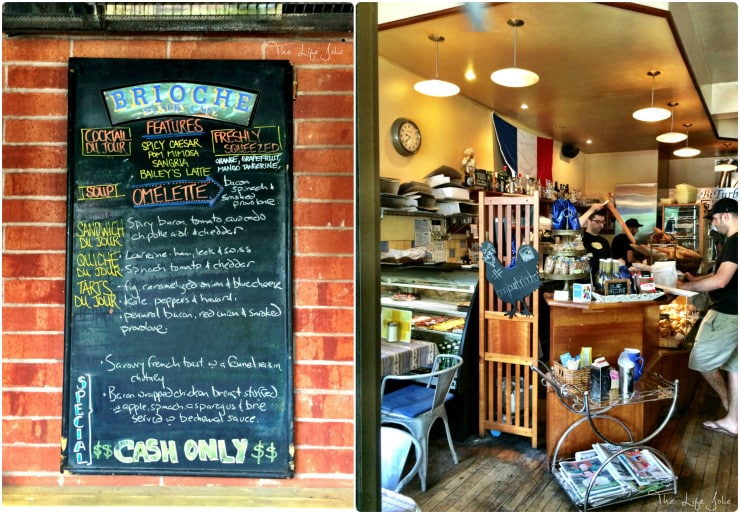 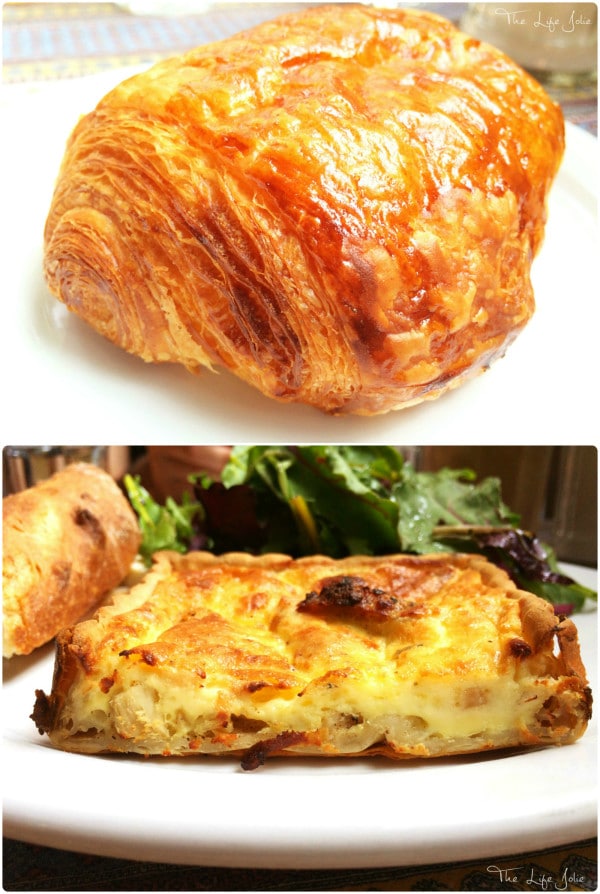 After an excellent meal we made our way to Ikea. I’m sure J was thrilled to be there, but we made decent time. Since there’s a $200 per person limit for bringing purchases over the border before you get hit with taxes, I was forced to exercise some restraint. We did end up purchasing a couple of desks, some shelves and some smaller items (I’ll post more on our office when I eventually get it set up- lots of interesting things to come!). After this we headed home. 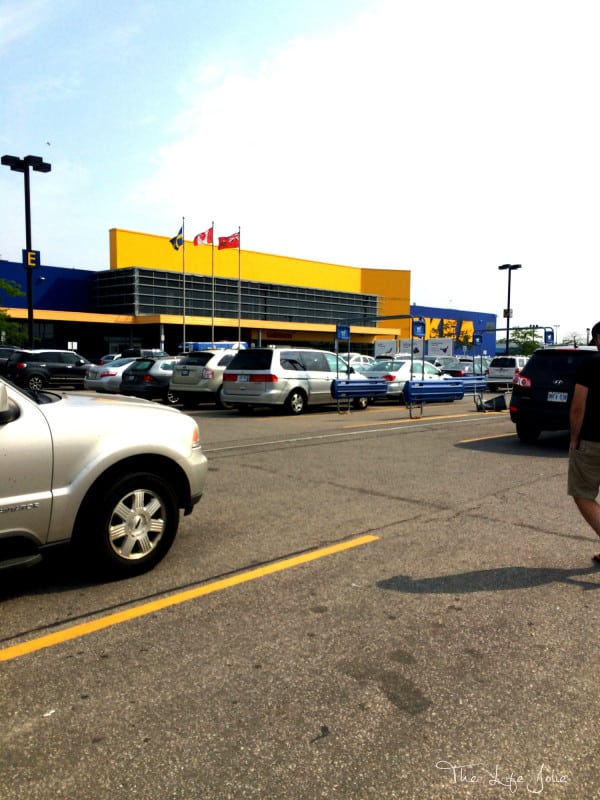 Altogether, it was a lovely little break. While we’ve left A with both sets of grandparents for slumber parties many times, we’ve never left town. I was not at all worried (I surprised myself!) but I definitely missed our gal and so did J. On the same note, I cannot wait to visit Toronto again!

Where is your favorite location to take a quick getaway?

Wednesday: Whimsy Wednesday, One Project at a Time, Wonderful Wednesday, Hit Me With Your Best Shot 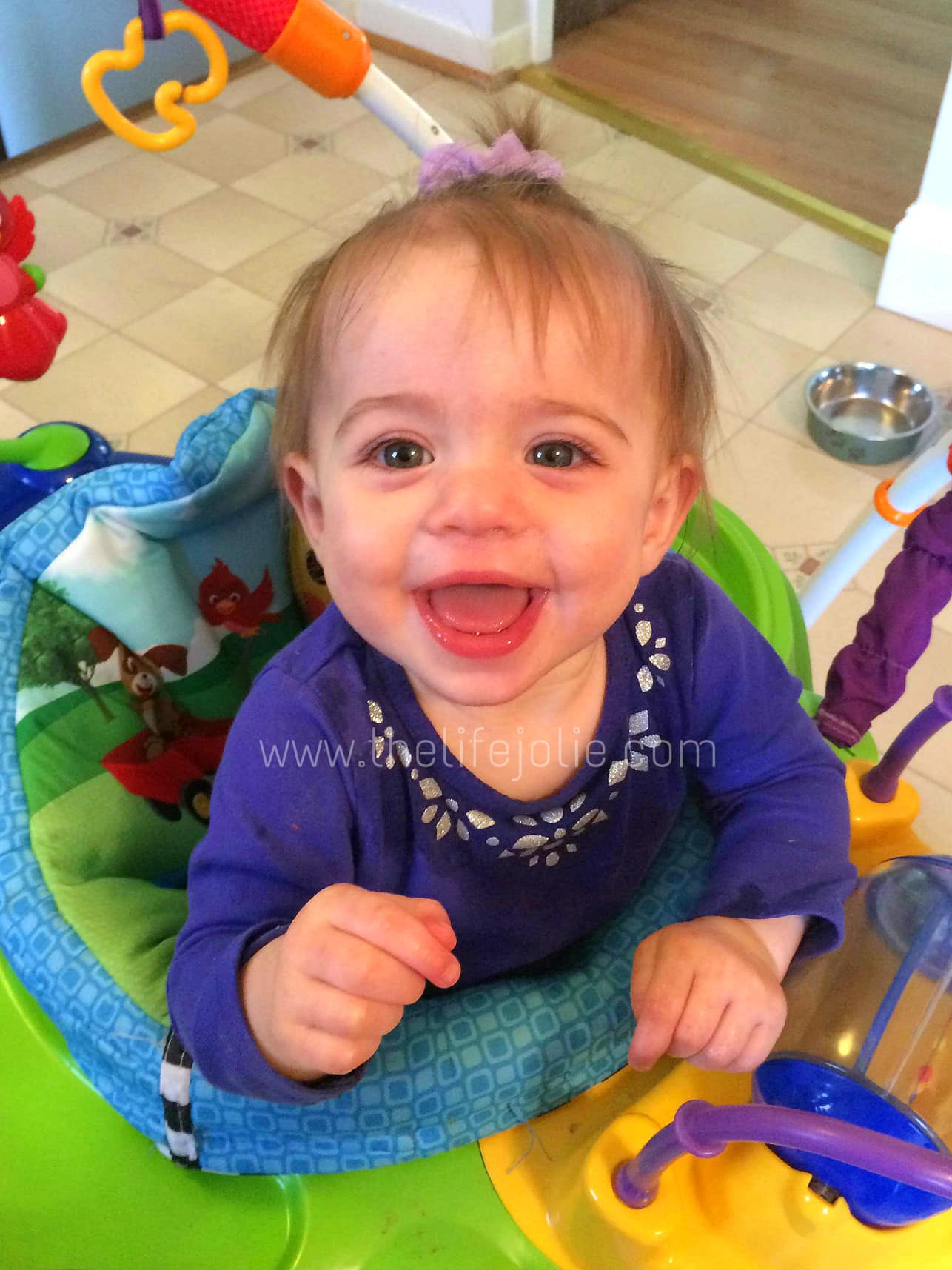