We are back in the game and slowly working our way along. After last weeks challenges we shifted gears and focused on getting better (our whole household was sick). From there we regrouped. I began to think about how far we’ve come in these couple of months and began to put together a strategy in terms of where we are headed. 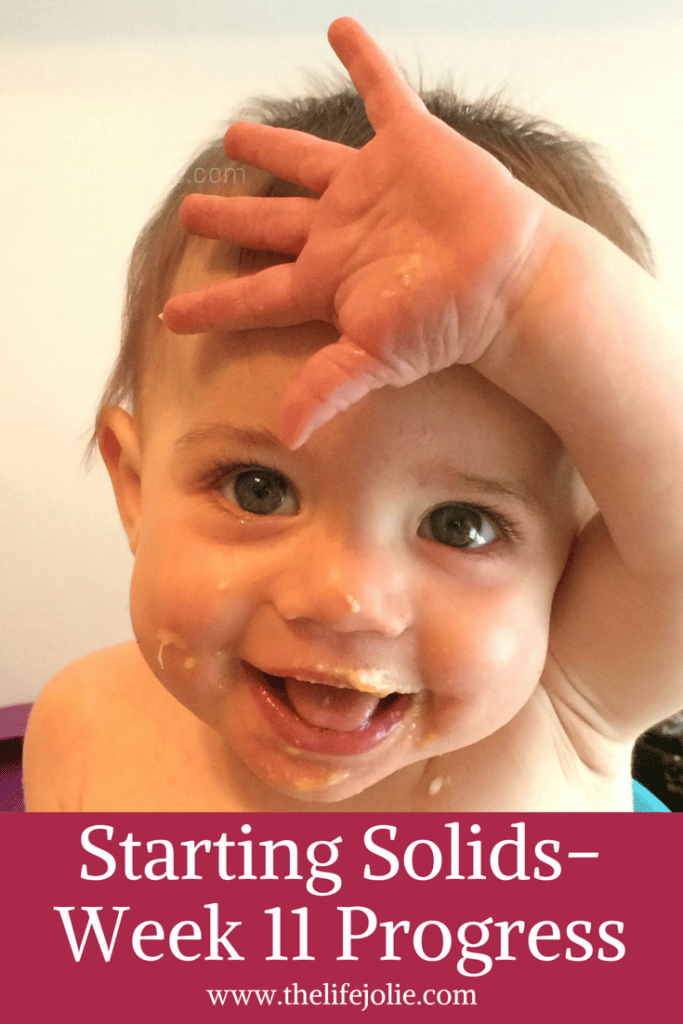 A part of me was thinking that while some of last weeks difficulties are directly related to A being sick, maybe she’s also not ready for the amount of texture that I was bringing to the table (see what I did there?). I fear that I got a little excited and went from zero to sixty. So with new resolve, we decided to slowly work our way into more texture. We will still feed A her purees (we have a freezer full of various purees and I hate wasting food) but we would start adding a tiny bit of texture to them as well has different herbs and spices to introduce new flavors. J and I also agreed that we’re going to try and eat earlier so that A is awake while we eat and can be a part of it. We feel that it couldn’t hurt for A to start seeing us eat and socialize and hopefully she’ll mimic our chewing and other mannerisms. 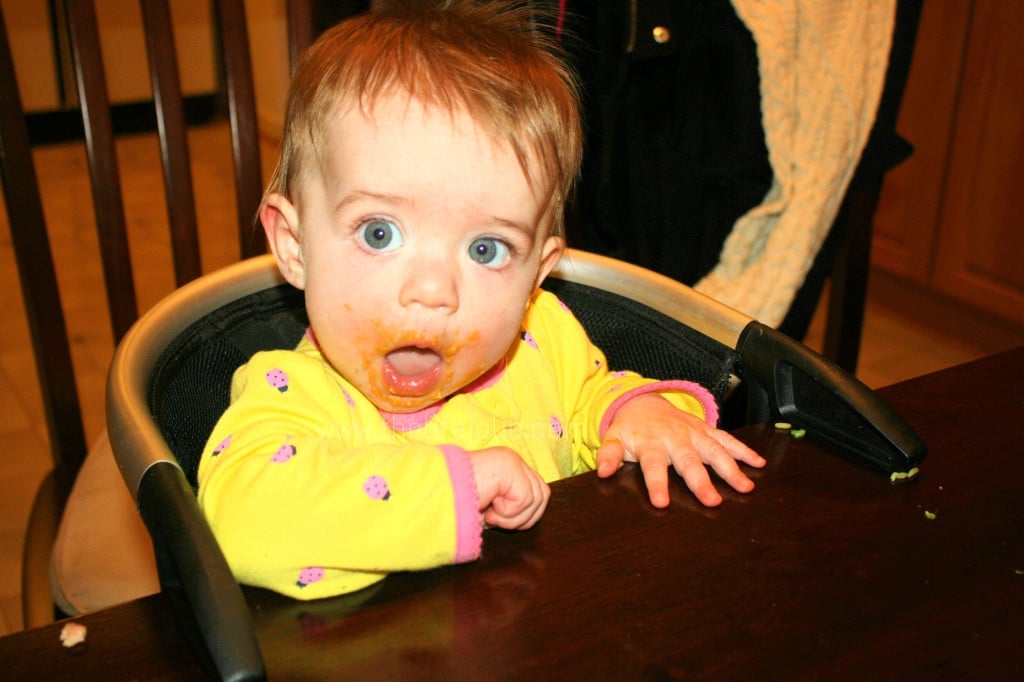 So earlier this week, we did just that; we attached the seat to the table and enjoyed our dinner with A. We also took really tiny pieces of our meal and spread them in front of her. While I didn’t really expect her to try and eat them at this juncture, at least she could explore the textures and make discoveries at her own rate. And she enjoyed rubbing the food between her fingers and on the table. 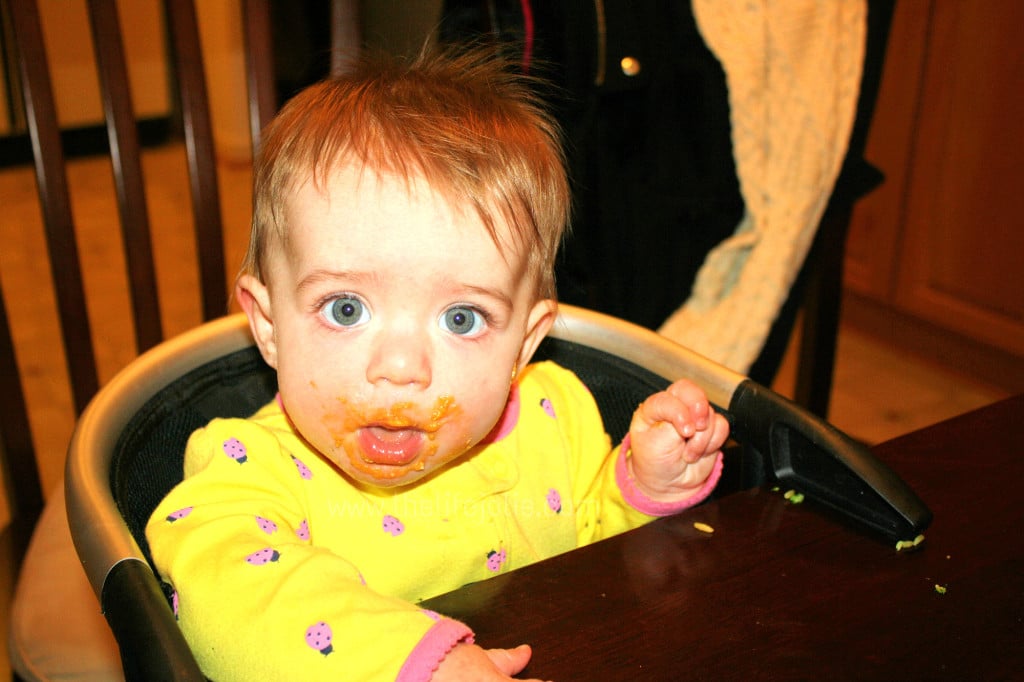 As the week progressed we fell into a nice routine of me giving A vegetable purees, followed by tiny pieces of our dinner, and ending with some fruit puree as “dessert.” There were still some nights that life got in the way and we couldn’t eat before A went to bed. On these nights we still gave A her purees and something mushed into small pieces (like avocado or banana) to explore. By the weekend, A would tentatively try to feed herself bits of what was in front of her. It’s clumsy at best, A definitely hasn’t mastered her pincer grip. While we’re not there yet, we have certainly made progress. She even makes attempts at chewing. So we’re back in the saddle and making our way at A’s pace. I’m so very proud of our gal. 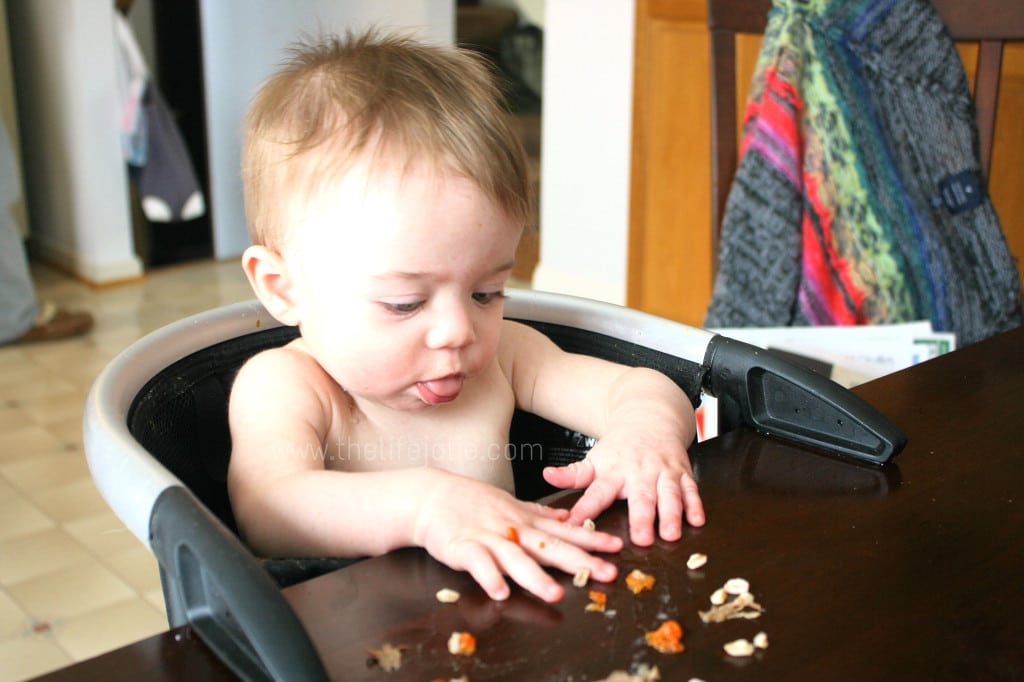 In terms of flavors, A tried and enjoyed cinnamon, garlic powder, parsley, thyme and rosemary. I introduced mango over the weekend, which was met with much enthusiasm (I simply cut it into chunks and ran it through the mini food processor so that it was broken down into a puree with a bit of texture in it so as not to cause A to choke, but still not completely smooth). I also added Farro to her puree, which went over very well. The meals of ours that A actually sampled (the others she didn’t try to eat) were pot roast and breaded chicken breast with rice and broccoli. she also had a small taste of the guacamole I made (more on that later this week) before I added the secret ingredient.

I feel that we’re off to a good start in this next phase. I picked up a papaya and some plums for this week. I will continue to add herbs and spices to purees and allow her to continue to explore our dinners at her pace. She doesn’t love textures and still spits out pieces that don’t appeal to her but we’re making progress, and that’s all that matters.

Grains that A likes:

Meats that A Likes:

Much Ado About Mondays

Mix it up Monday

Made by you Monday 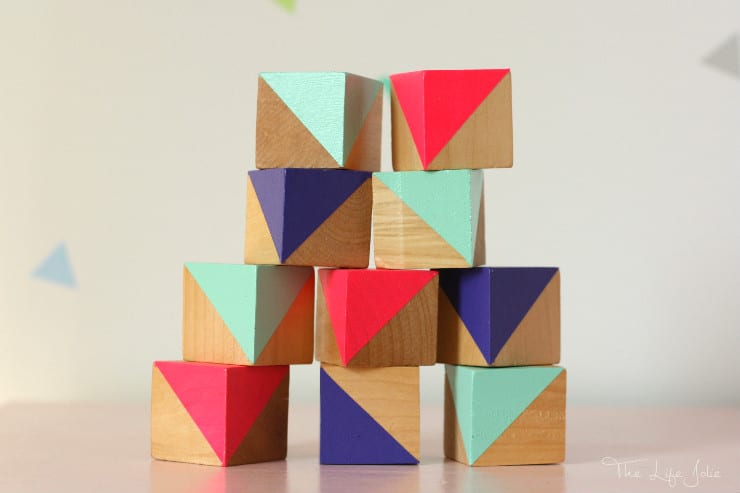 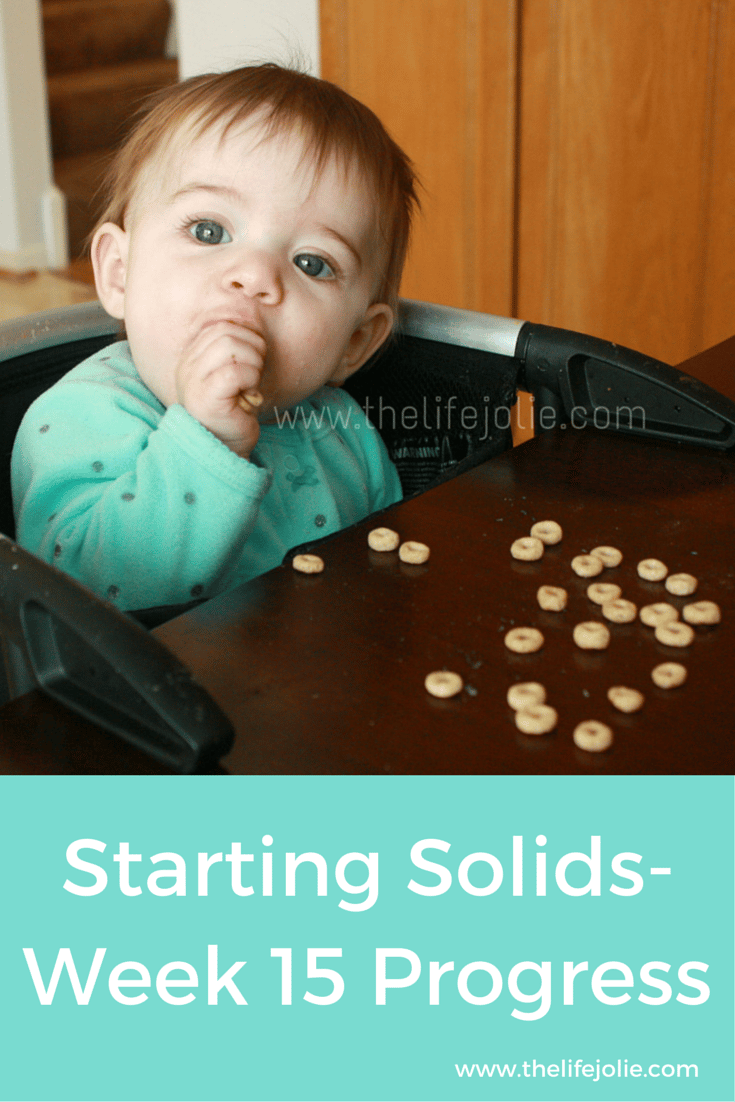