This week started with me going through A’s daycare menu and highlighting everything that A has eaten thus far. They will only serve her things that she’s tried. I’m happy about this to an extent, most specifically because I don’t want her having juice for a while. Once she is around 15-18 months, she’ll be expected to eat everything on the menu unless she has a Dr’s note. I’ll have to talk to our pedi about that one, as I’d really like to delay the juice for a while. We’ll see. 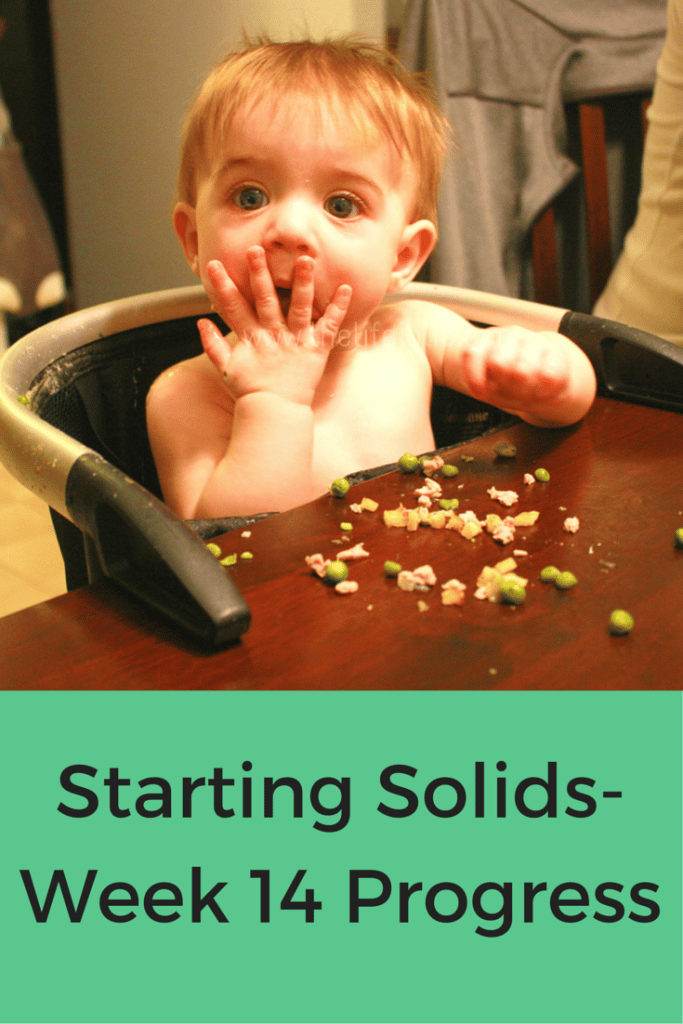 This week, A enjoyed some chicken with puff pastry on Monday. On Tuesday my parents were watching her because J and I were getting our taxes done, so she enjoyed her usual purees. Wednesday, A had a mix of leftovers I found in the refrigerator. Additionally, I mixed some dill and black pepper into her purees which she gobbled down. Thursday was my late day, so A enjoyed some purees once again. Friday was a little all over the place, but A went a little crazy with tater tots at daycare (and apparently got upset when they tried to clean her tray before she was done…that’s my gal!).

On Saturday we introduced corn flakes and strawberries (both of which are at daycare). Then, we joined some family for lunch at a local diner, where A enjoyed potato pancakes with apple sauce, some french fries and even sampled the pickle (which was a success!). For dinner A devoured pork tenderloin in a rosemary balsamic marinade, roasted potatoes, and pea with onions with an apple pear puree for dessert. Altogether it’s been a good week, though not entirely consistent. 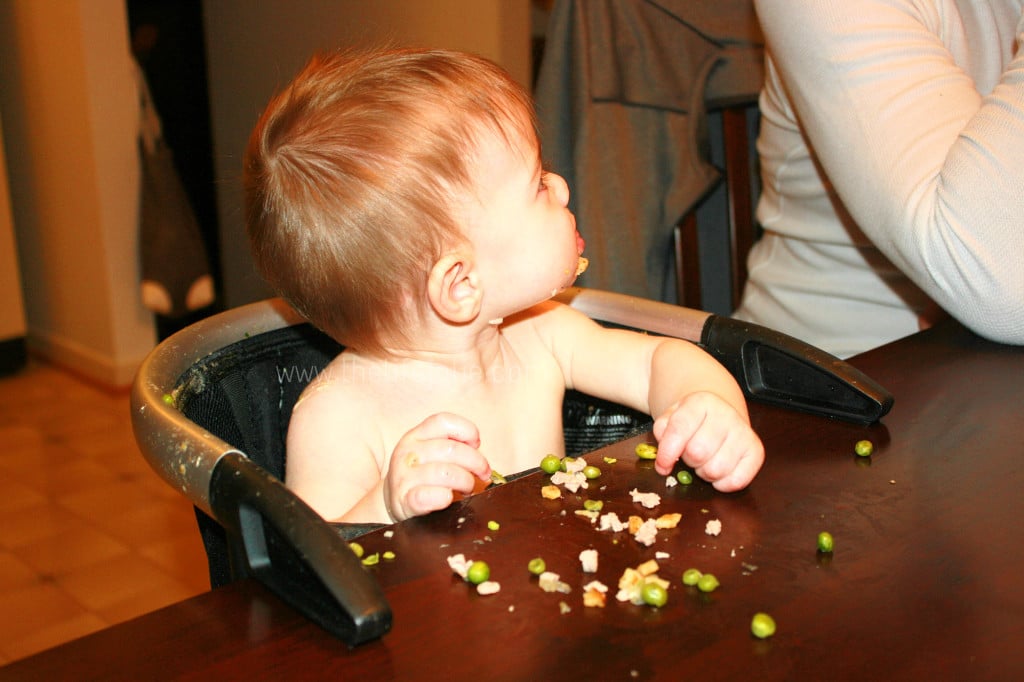 I haven’t yet made a meal plan for this coming week (that’s my next order of business). To be honest, I’m not really concerned. I really want to introduce fish this week and I’m thinking of throwing some yogurt into the mix.

In other news, we have not been thrilled with the Phil and Ted’s Lobster Seat (which attaches to our table). I like the fact that it attaches and that she’s right at the table with us. I also like that it has such a small footprint. Our house is not large. We don’t like that the seat is poorly designed in some ways. In order to clean it you must remove a screw from one of the sides to take the fabric seat out. Even then you can’t put it into the washer and dryer. It’s kind of a hassle, especially at this juncture where the chair is always a mess. I really don’t want to buy a full size high chair,  but I’m going to begin researching our options. Of course the seat we have now was the one thing I didn’t spend much time researching,I simply added it to the registry without much thought and I’m regretting that decision.

For Valentine’s Day, I got a some sippy cups to try out. I let her play with one right away, though I hadn’t yet washed them so she wasn’t drinking out of them. She wasn’t really sure what to do, so she hit it against the table in typical baby fashion. 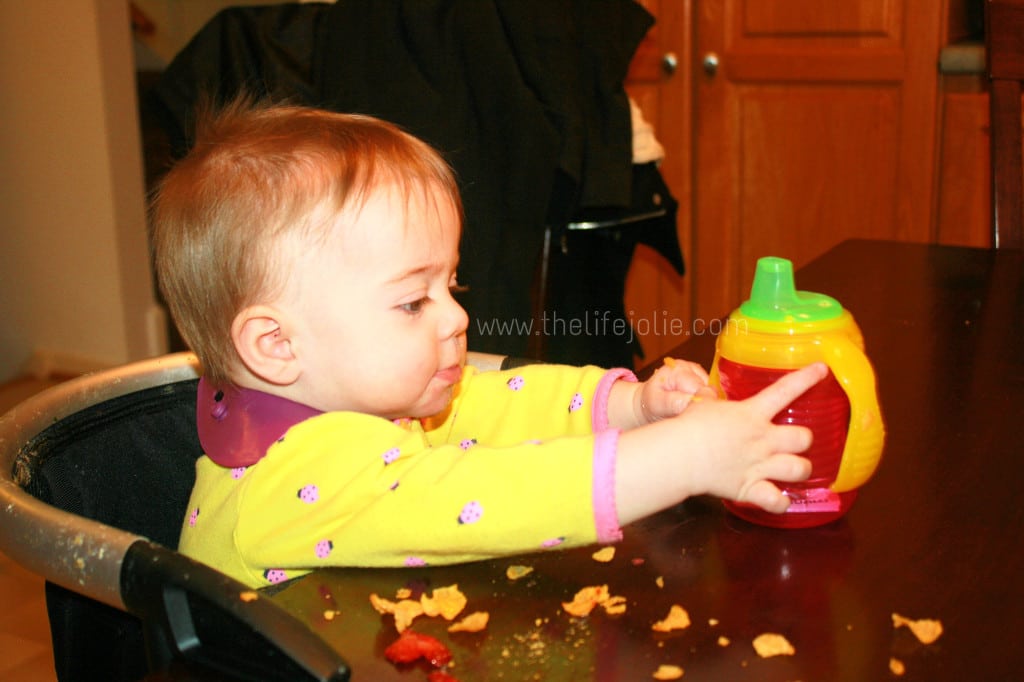 I’m trying to figure out if I should be as consistent as I’ve previously been with these food updates. I worry that they’re just turning into me listing out what foods A has added to her repertoire.

Grains that A likes: 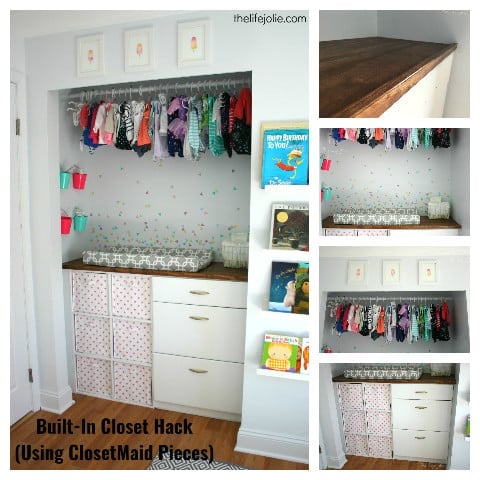 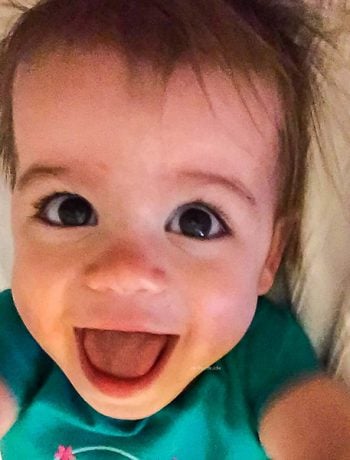