Another week, another puree. 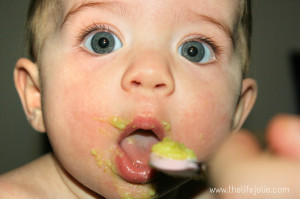 This week we introduced Asparagus and Brussels Sprouts. Both went pretty well, although she wasn’t especially hungry with the Brussels Sprouts. Still, she seemed to enjoy both, though I don’t think either was a favorite. I’m starting to notice the difference in things that she likes/is ok with and things that she loves. For example, I was feeding her carrots this week and her she would open her mouth for more before I had even had a chance to get more on her spoon. She generally opens her mouth with everything when she sees the spoon coming, but she gets enthusiastic about things like carrots, sweet potatoes and green beans. 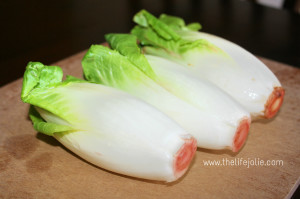 This week I also added some organic baby oatmeal into the mix. I wasn’t really thrilled about it. I don’t know why, because I was going to add it at some point. For some reason the mush-that-is baby oatmeal grosses me out more than the veggie purees. It was definitely the messiest A has gotten as well. Maybe I made it too liquid-y, it was dripping everywhere. 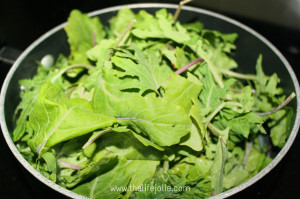 The main reason I added the oatmeal at this point is because as A’s appetite grows, I know she’ll need to eat at daycare. Since I’m not allowed to bring homemade purees in for her, I figure they can give her the cereal instead. We would have added it into the mix sooner or later. I’d rather not add jarred veggies as we don’t really eat jarred veggies in our everyday life. While we’re not the best eaters, we’re working on trying to clean it up a bit. No need for extra preservatives when she can learn to love fresh veggies. 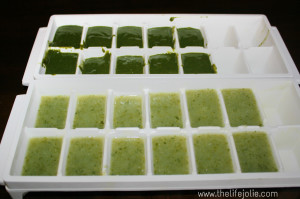 This week I made kale and endive purees. The endive was a little more liquid-y than I had hoped. I worry that she may not be a huge fan of this due to the texture (which I think was the issue with the zucchini) but we’ll play it by ear. Wegmans has the most amazing baby kale- it takes all the work out of it because it’s so small that you don’t have to trim off those fibrous stalks. I also really love their super greens which is a mix of baby kale, baby spinach and baby swiss chard.  So easy to make and even more delicious! 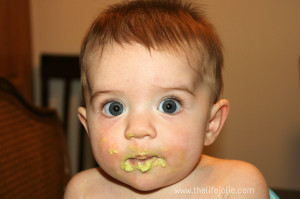 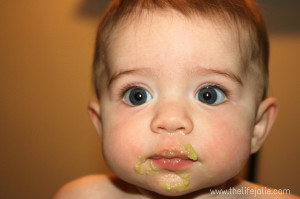 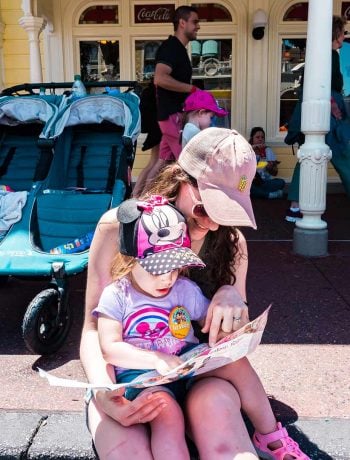