Well here we are folks, we're on the other side of one! That's right- Tess is 13 month! I'm pleasantly surprised. I thought I would be much more sad and weepy, but I'm feeling pretty great about it! I'll go ahead an assume it's because I'm having way too much fun with T to focus on nostalgia.

One thing I forgot about was how much fun they are at this age, and how it gets even more fun each day! For the most part T has a super bright and sunny disposition. She loves to smile and giggle and her sense of humor is really beginning to come through. 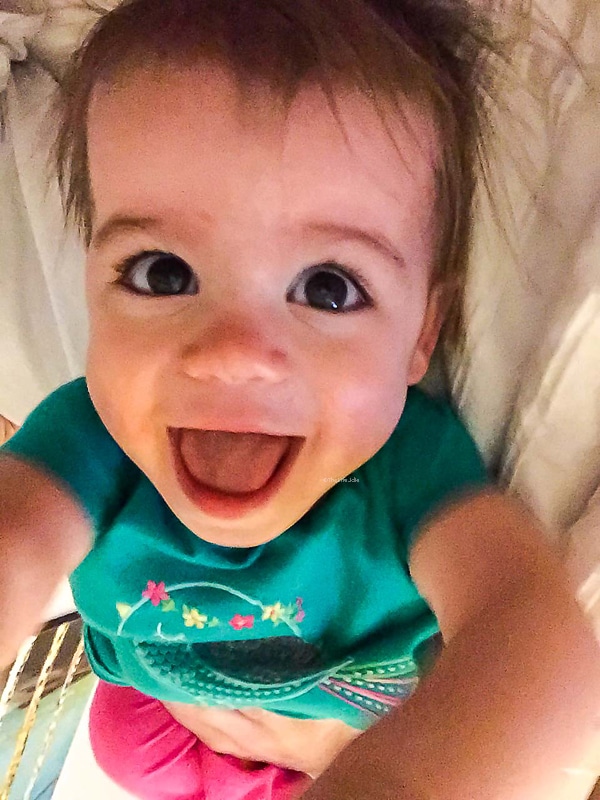 One night I looked at the girls at the dinner table and I took my hands and placed them on my cheeks and opened my eyes really wide and also my mouth, as though I was surprised. The girls immediately burst out laughing and every time since then it's a sure-fire way to crack them up.

T is great at clapping. She also loves to take my hands and make them clap, specifically when I sing Itsy, Bitsy Spider. This really amuses her and she opens her mouth into a huge smile and all is right in the world.

When she's in the mood she blows me kisses freely (doesn't use her hand, just blows kisses with her mouth) and sometimes she waves the sweetest little baby wave. She gets especially excited when she sees all of her grandparents on Facetime. 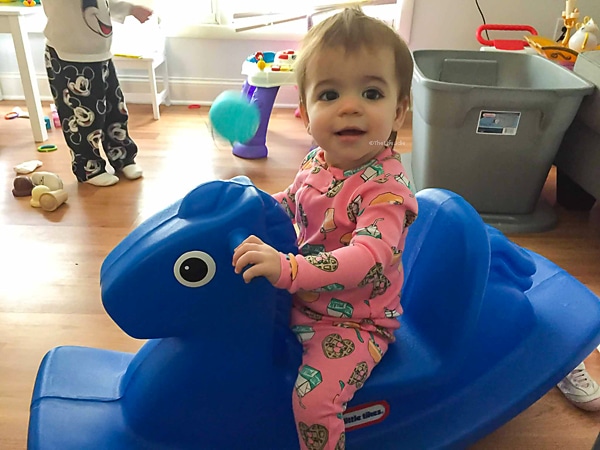 T is not walking yet, but getting closer and closer. She loves cruising around with her walker

and gets even more excited when we cheer her on. I know it's coming and then all bets are off! Last night she was practicing standing on our bed and even let me walk her a bit holding her hands up for the first time.

My gal loves to eat and is thrilled to eat anything I put in front of her. She definitely shares her irritation if we take too long to get her food cut up and in front of her. T also lets us know pretty quickly when she's had enough. Sometimes, when she things shes being sneaky, she'll feed the dog. Macie knows now that sitting near T's chair is the most likely place to get food. T gets a huge smile on her face when she feeds Maciebear. 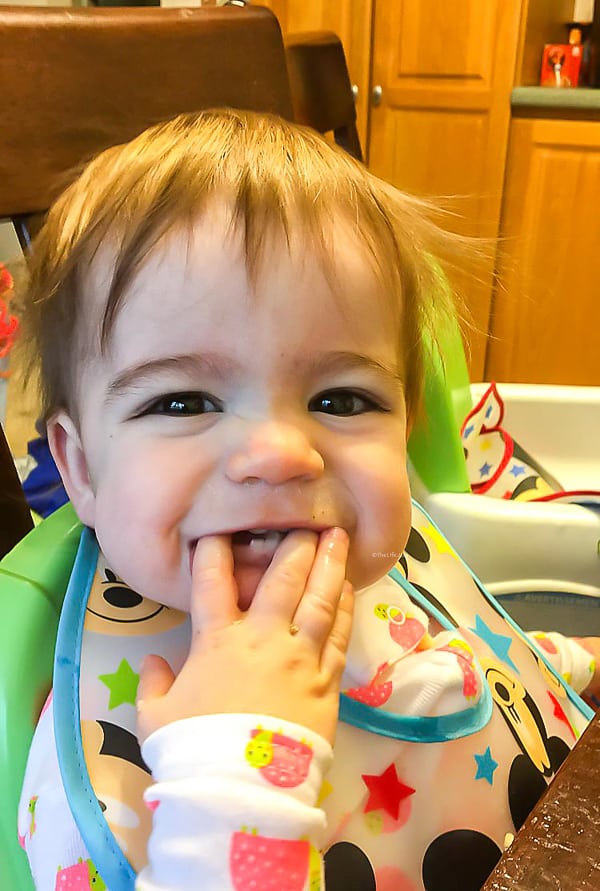 We added whole milk into the mix right before she turned one. It was hit or miss at first but now she does pretty well with it. She goes back and forth between sippy cups

We're down to only one nursing session first thing in the morning and one right before bed (and pumping is done- hooray!!). The one before bed is pretty minimal and I think we're just about done with that feed, as she gets distracted and disinterested after a minute or two. I'm trying to figure out how to get her fully weaned in a way that will not cause me to get terribly engorged, or more specifically develop mastitis. 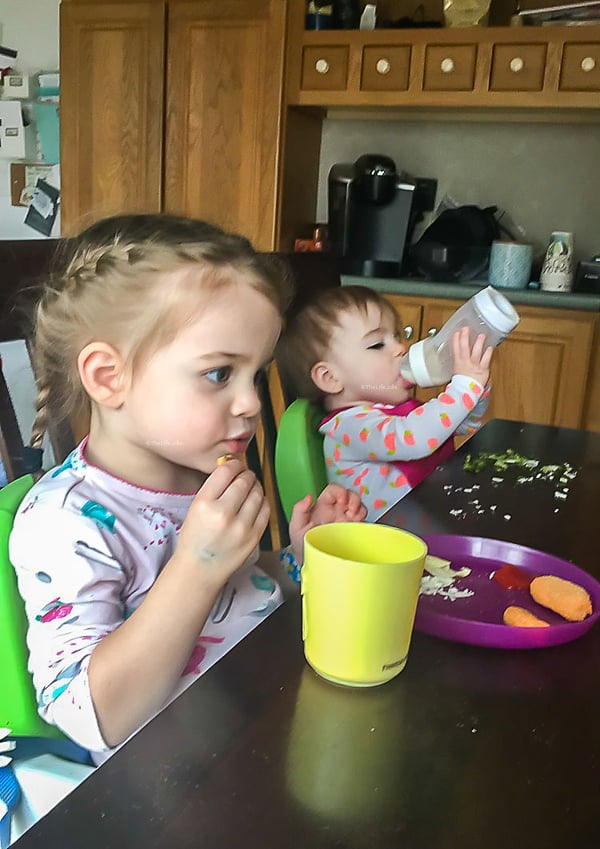 It's that morning feed that will be that last to go. I know she's ready to drop them all, I just need to figure out the best way to go about it. So that will be the plan in the next couple weeks. I'm slightly sad, but mostly grateful that it went so well this time around.

While she's not one to cry for no reason, T is quick to let us know when she needs something. Additionally, when we make her mad (by taking things away that we don't want her playing with or blocking her from crawling off the bed or climbing the stairs or splashing in the dog's water bowl) she definitely whines in a way that sounds almost as if she's complaining. It's kind of hilarious but makes me slightly nervous for when she can talk... 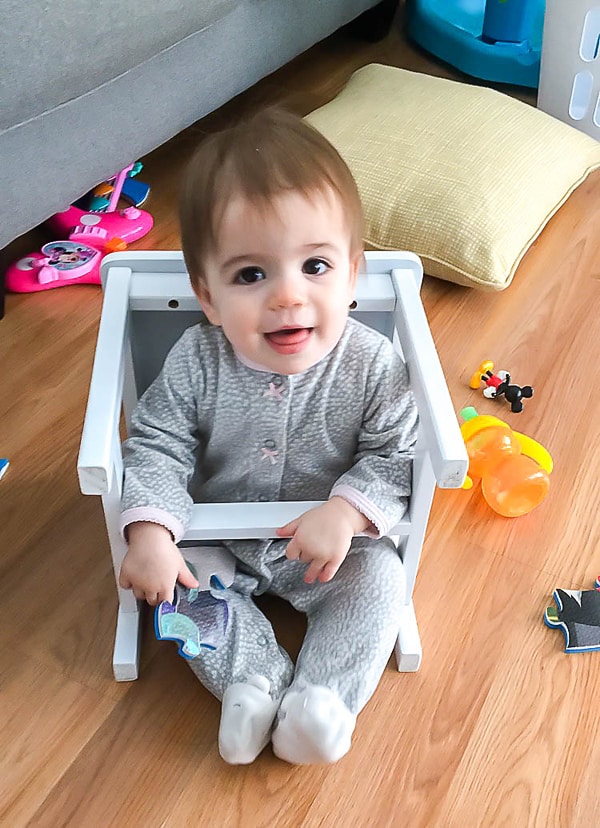 Now that both girls are in convertible car seats

going out is tricky, particularly when I'm flying solo with both girls. While I haven't found the transition to two kids to be hellishly difficult (don't get me wrong, it's challenging, but overall it's not been nearly as hard as I expected) going out is a lot harder now that I can't just carry in an infant car seat

It also makes me nervous, especially with all the posts going around Facebook about weirdos trying to sake children and following people around stores and stuff like that. At this point, I'll usually ask an employee to walk with me to my car and just hang out there while I strap the girls in. I don't ask them to load up my bags or anything, it's more to have another adult on hand and my own piece of mind. You can never be too careful. 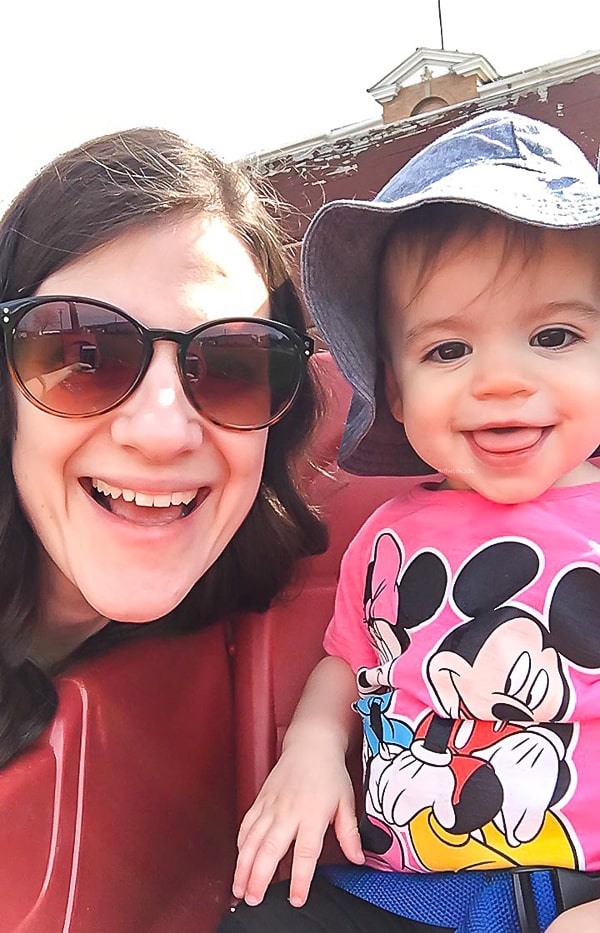 I think A is enjoying the fact that T is beginning to be able to play with her a bit. They get to have fun together and watching them is the absolute best. A loves pushing T in their Minnie Mouse airplane toy

, which is the cutest. Allie still has moments of jealousy. Like when T is being held and then she wants to be held. We try and work through it on a case-to-case basis. But it's still never directed toward T, so that's good.

The other night, the four of us went out to Red Robin for dinner. There was no particular occasion or anything, but since money is pretty tight right now, we don't often dine out. So it felt sort of special and even a bit celebratory. T was happily eating all the things we put in front of her. A devoured her burger and J and I also did quite a job on our dinners (I was equal parts impressed that I killed my whole plate and slightly horrified that I ate so much!). 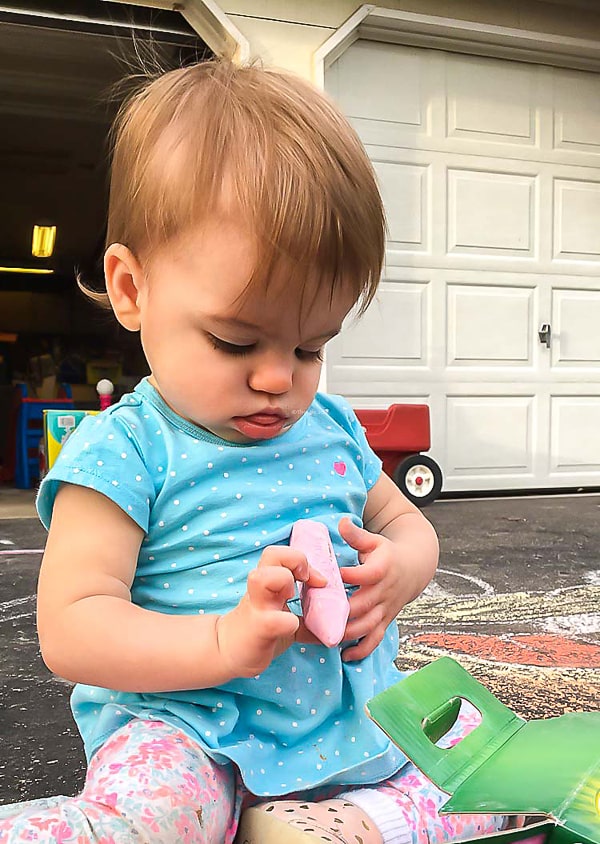 We finished the meal off with a Mile High Mudpie which the three of them finished easily (I had no room!). It was just one of those great nights where everyone happily enjoyed a meal and chatting with each other. No whining. No fighting. No tantrums (interestingly, A had her second-ever public tantrum, mere hours before that, so I was expecting the worst). Everything felt so right, the kind of family moments J and I dreamed of before our girls were born.

Sitting there watching our girls enjoying their meals and the company, our family felt so complete and so right. Though I still experience a tiny bit of sadness about the fact that the baby-portion of our life is coming to a close, I feel so amazing about our little family and the time we spend together. It all feels so right and so good, and I can't imagine it any other way. 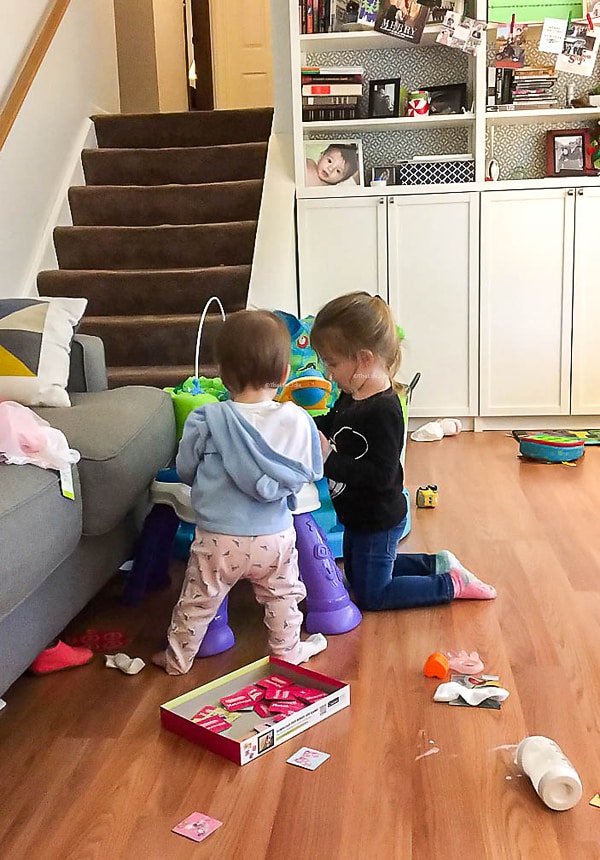