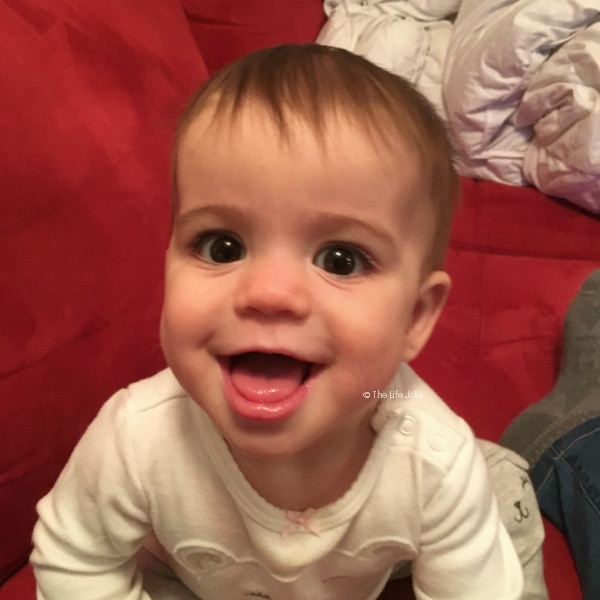 I hope everyone had a Merry Christmas, Happy Hanukkah or happy whatever-you-celebrate! Here we are at nine months, you guys. It’s crazy, in the next few weeks, T will be out here for as long as she was in there! And what a fun month it’s been!

T is such a little ray of sunshine. I can’t get over it. I mean, I knew we’d absolutely adore her (and boy, do we!). But it was hard to imagine loving another kid as much as we love A. I’m going to assume it’s because I’ve never had two kids and I had nothing comparable to begin imagining what it’s like.

It’s almost as though the missing piece to our family (you know, the one we never knew was missing in the first place) is now here. T adds a whole other level of joy. She is ours and we are hers, it was meant to be. I truly believe God designed her as the perfect fit into our great Freimann puzzle. 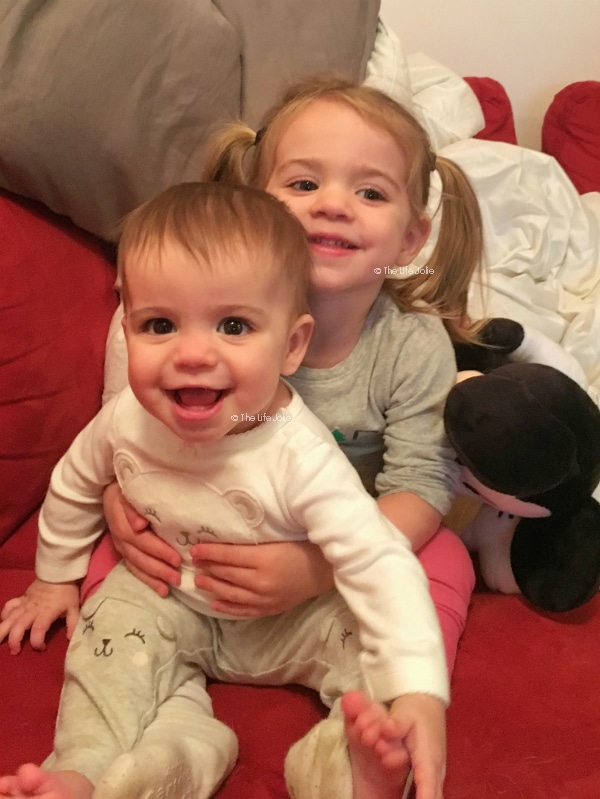 These days, one of the best possible descriptors for T is audacious. Girlfriend is into everything. She has such a blast crawling around and is pulling up on everything. When she does pull up on something, she gets this wide grin on her face and is super proud of herself. She even experiments with letting go once in a while and seems pretty interested in walking (much to my chagrin).

T also loves honing in on things she knows she’s not supposed to be playing with, like Macie-bear’s water bowl (or the Christmas tree, or the gifts or climbing the stairs…). And when I catch her I say “Nooooo Tessa” and she looks up at me with this big sh*t-eating grin and pops back down onto her bottom for 30 seconds before going in for it again. 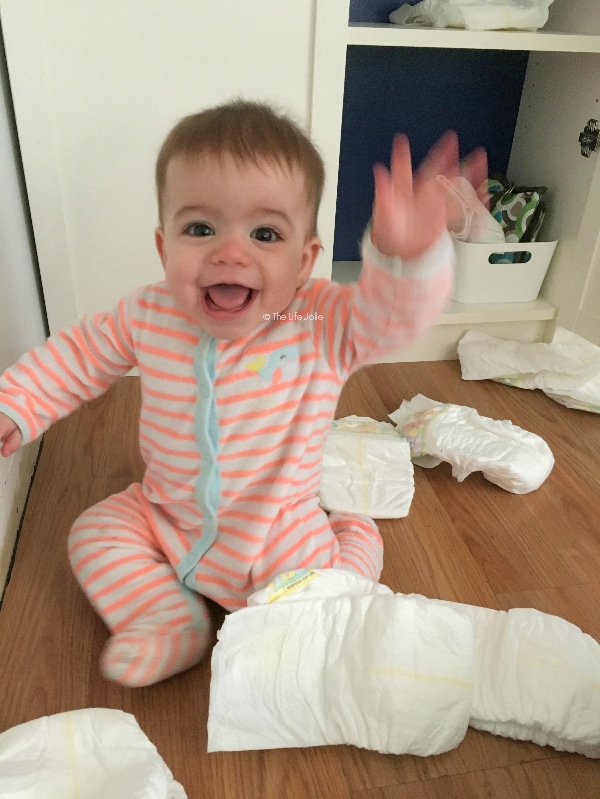 So suffice it to say, our girl is adventurous. She really likes to be a part of everything. While she used to happily bounce around in her bouncer while we ate dinner, she will now settle for nothing less than sitting in her booster at the table with the rest of us. But we don’t mind at all.

T is fixated on her sister. I’m pretty sure she is fascinated by her and wants to do everything A does. For the most part A is totally down with this and gets a big kick out of playing with T and making her laugh. When A discovers new sounds, faces and motions that get T giggling, she will do them over and over again to get those belly laughs.

A still has her moments where she whines and pouts because T comes up and tries to play with the toys she’s playing with, but this is generally resolved quickly when we remind A that T looks up to her and just wants to be like her and play with her and what a great thing that is. 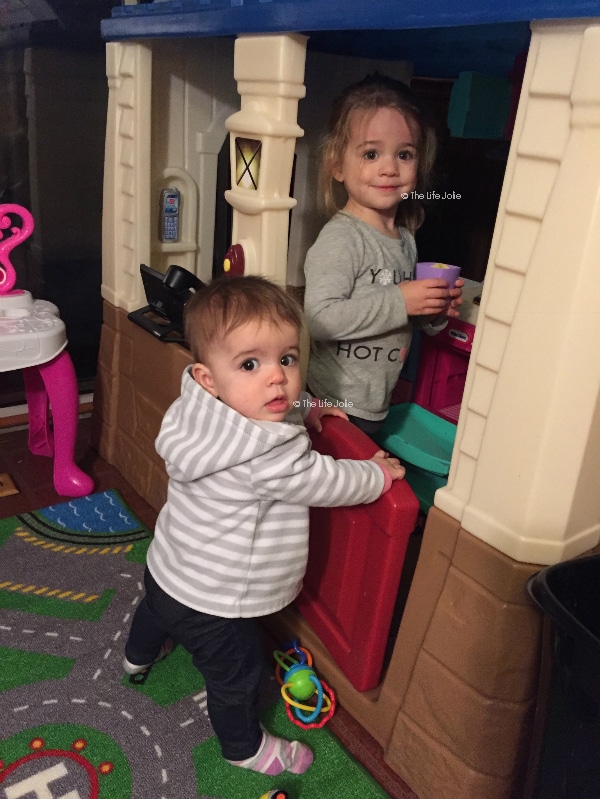 A has the sweetest little voice that she uses to talk to Tess and she says things like “Hi Little Girl!” or “Hi Sweetiepie!” or my personal favorite “Hi Tessy!” (a nickname which my dear husband is not a fan of!). If T smacks her hands on the table, A does it to, and is totally amused by it. She also actively involves herself in the hand stacking game where we all stack our hands on eah others hands and when one of your hands is on the bottom you pull it out and place it back on top of everyone’s hands. A loves that T can do this!

T still get’s a huge kick out of pattycake. She also enjoys the Itsy, Bitsy Spider, just like her sister did, especially when I lightly brush my hands up her face when I say “wash the spider out.” She gets that same mystified and excited look, which I adore.

Lately, if I look at her and laugh loudly, she will also start laughing. And if I blow kisses at her (not using hands, just my mouth) she shapes her lips into the sweetest little pucker, as though she’s trying to blow kisses back. But my favorite is what we call her “Raging Bull Face” where she scrunches up her eyes and nose and puckers her lips and makes these loud breathing noises similar to a bull that’s about to charge. She knows this amuses us as well so she is always down to do it again and again!

While at times she resembles me, most often she looks like Justin’s baby twin. Seriously, if it weren’t for the quality that shows they’re old photos, I would have thought his baby pictures were Tess. The resemblance is uncanny (and while A and T look extremely similar, A’s features tend to be weighted more towards my side of the family). 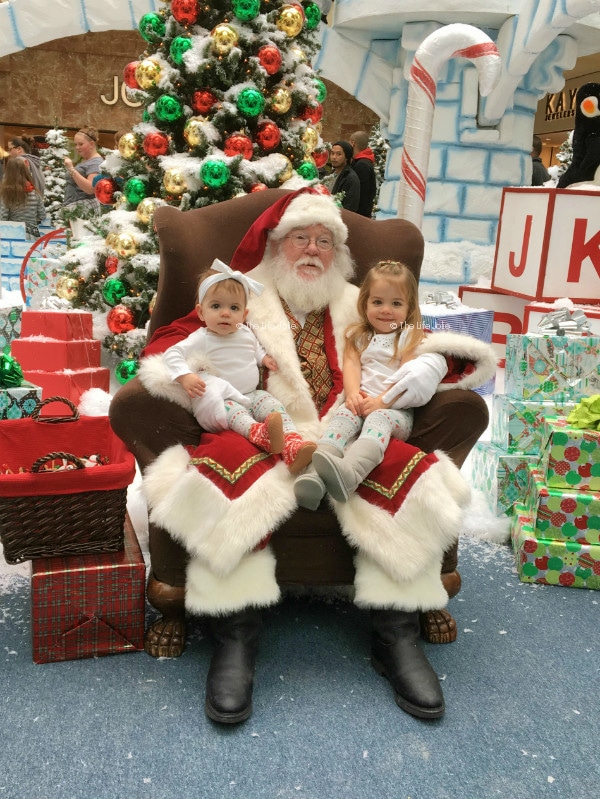 She continues to be a beast with sleeping. Down at 8pm and up around 6:30/7am (though once in a while she’ll wake to feed at 5am- these are not my favorite mornings!). Naps are ok at daycare and long and luxurious at home- seriously she will take two hour naps like it’s nothing. They’re still not entirely consistent, but it works out fine.

T has been pretty prone to getting ill, like any good daycare baby in her first year there. She had a rough go of things in Nashville, though she handled it like a rockstar and she especially has a lot of ear infections. Our pedi is keeping an eye on this and if they keep up we will be speaking to an Ear, Nose and Throat doctor to look into the possibility of getting tubes in her ears. We’re not there year, so I’m not going to think much about that until we get there (if we get there).

T is still rocking at nursing and insists on holding her own bottle when she is drinking from that. She will put a sippy cup in her mouth but doesn’t really drink from it yet. Pumping continues and while I’m barely keeping up, it’s still working out and I’m really, really pushing to make it a full year.

At T’s 9 month appointment, our pedi gave us the go ahead to feed here pretty much anything (with the exception of honey) so we are beginning to give her the softer components of whatever meals we are eating. I tried this a little over thanksgiving and she wasn’t particularly receptive so I stopped and continued the purees. But right around when she hit 9 months, I tried again and though she was tentative at first she’s been doing well with it.

Shes especially loved eggs, broccoli and the tiny bit of Nutella I gave her a taste of. I’m still feeding her purees along side these as well, since we still have a bunch in the freezer.

Spitting up has pretty much ended, much like it did around this time with A. The biggest difference is once in a while she’ll have a gigantic spit up unexpectedly. I’m thinking this may be her getting backed up on mucus, since she is generally back to her happy old self again.

T-girl has two teeth both up front and on the bottom. I’m almost positive she has more coming in as she’s been showing all the signs of teething.  Overall she still has a super happy and chill disposition but the usual grouchy moments associated with teething are definitely still evident.

Still, each day with her around is even more fun than the last. Her gigantic, wide smile lights up every room and it continues to be the pleasure of my life getting to know her and being a mommy to my two girls. 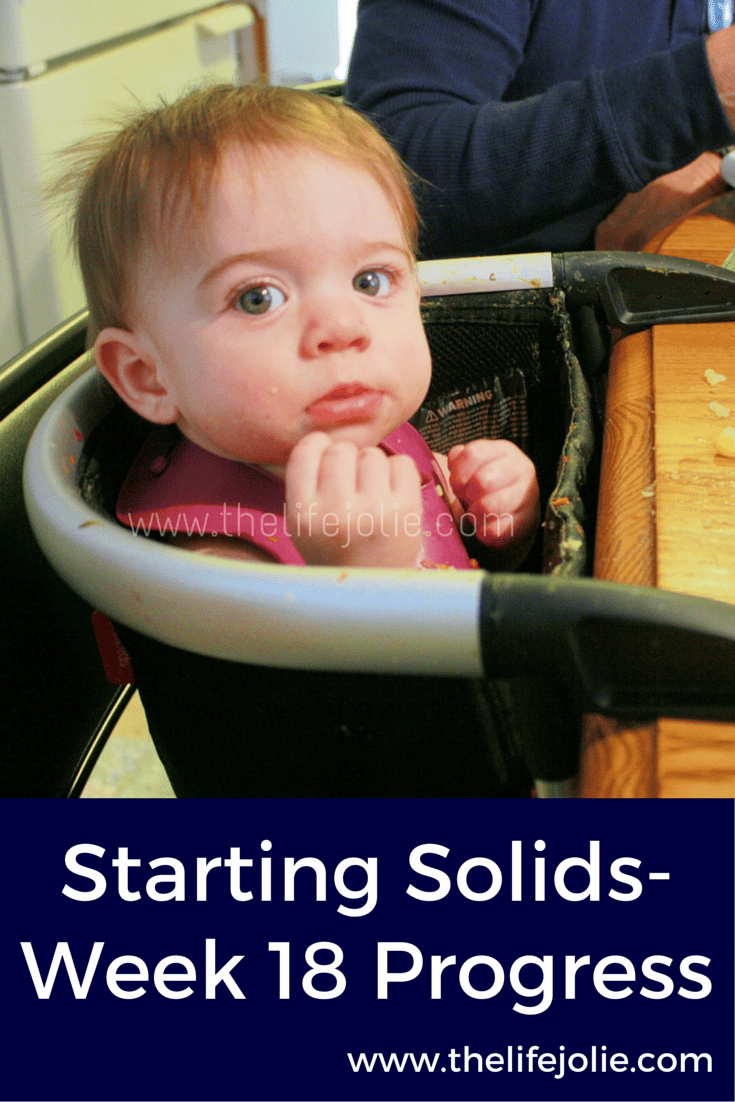