At some point, a really smart person was like “wouldn’t it be cool if you could take a pacifier and attach it to a plush toy that is small enough for little baby hands to grip?” This person then attached a Soothie to a cute little beanie toy and thus the Wubbanub was born.

I’m pretty sure there’s a lot more to the story than that, but you get the picture. We received a few Wubbanubs for a A as gifts and they were just SO cute (a lamb, monkey and elephant). So you can imagine I was pretty bummed when A decided she was too cool for Soothies and would only take Mams (binky snob.). So, I moped for a minute and then got over it.

Fast forward to about a couple weeks ago when I began packing up A’s 0-3 month clothes (she’s growing way too fast, I can’t even handle it). I came across the Wubbanubs again and got to thinking. There must be other people in our predicament. Binky Snobbery certainly isn’t unheard of. So I did what any other crafty gal would do. I began searching for hacking options on Pinterest. You like how I say that as though I’m not on Pinterest all the time? HA!

As always, Pinterest came through and I found this post on how someone hacked their Wubbabnubs to accommodate Mam Pacifiers. Being the Binky-Snob-Enabler that I am, I got into my car and went right out to pick up the items that I needed to hack A’s Wubbanubs. All you need is a Wubbanub, a Mam pacifier clip (remove the leash, you won’t need it for this), a seam ripper and a needle and thread.

The first thing I did was get really angry and yanked the Soothie that is attached to the animal as hard as I could. Actually, I wasn’t really angry, I just gritted my teeth and tried to pretend that I had decent upper body strength. I’m pretty sure that was my workout for the month (there’s a reason these last 10 baby weight pounds don’t seem to want to budge). While I couldn’t actually get the entire Soothie out in one piece, I was able to expose the stitches that were holding it onto the animal. I then used my seam ripper to rip the seams and remove the Soothie.

Once it was removed I was able to take the smaller end of the pacifier clip and put it into the hole and sewed it closed around it.

Make sure you hide your knot inside of the hole and give it a good yank to make sure it’s on there nice an tight.

I must say, for someone with minimal sewing skills, these were pretty easy to hack and came out looking pretty good. I also love that I’m able to remove the individual binkies in the event that they drop on the floor. It’s nice to not have to constantly wash the entire Wubbanub. Thank goodness for decently matching thread to hide my not-so-great stitchery. This little project was also pretty quick. I was done in 10 minutes. Quick and easy!

November 11, 2014 By Jessy Freimann
7
A Big Thank You to the Real American Heroes on Veterans Day Finding out we were FINALLY pregnant. 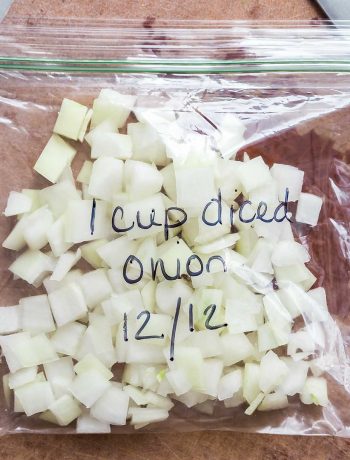 How to freeze onions | The Life Jolie Kitchen Basics

How to Chiffonade Basil | The Life Jolie Kitchen Basics