These classic Swedish Meatballs are an authentic and easy family meal. This homemade recipe is made on the stovetop with a savory gravy- it's the best way to warm up on a chilly day! 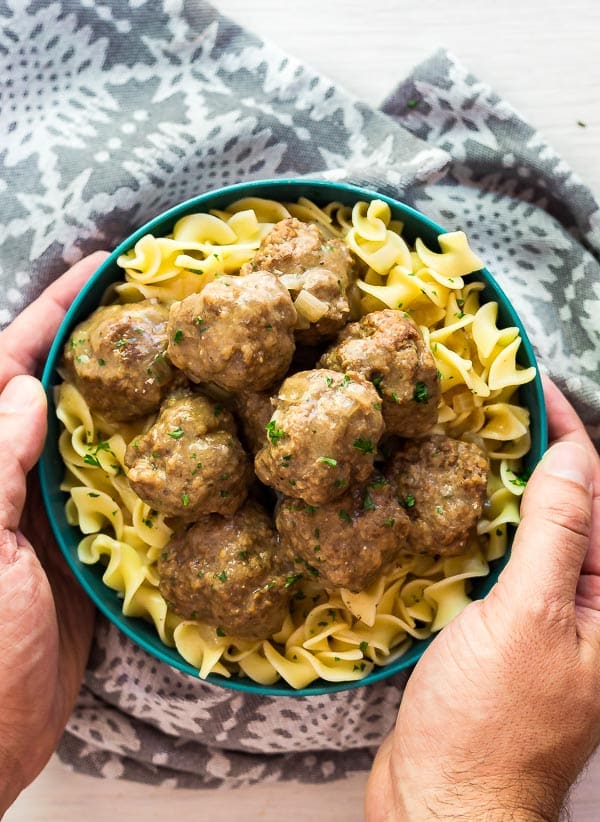 If you follow my Instagram stories, you likely saw that on Friday morning T had tubes placed in her ears.

Our arrival time was 7:15am, because they apparently always take their youngest patients earlier in the day (score!).We dropped A off at daycare and headed right over to the surgery center.

We only had to wait around 7 minutes before they called us back, in which time, T made her way around the waiting room and got the lay of the land. She was in a surprisingly good mood considering she hadn't eaten or drank anything since dinner the previous night. 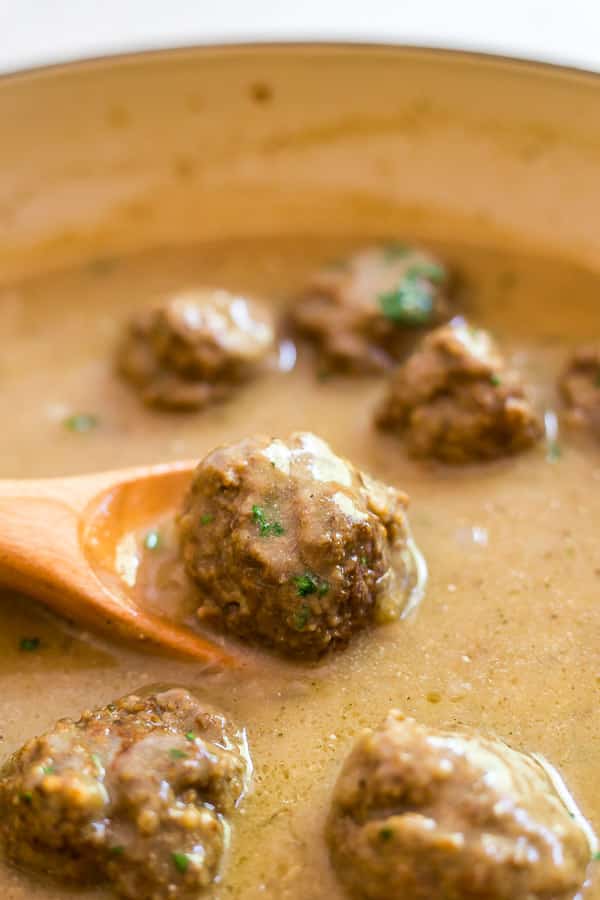 Once we made our way back to the triage area, they brought us to our little "triage cubical" and started going through T's medical history. They also checked her blood pressure and heart rate.

I was totally on edge at this point. Then the anesthesiologist came back to chat with us a bit. After that the RN's that would be in for the surgery came over and finally the doctor. Everyone was so, so nice to us and really reassuring.

They gave T the piece that goes over her mouth so that she could familiarize herself with it and we changed her into the little hospital gown and itchy hospital socks (which she promptly pulled off- afterwards they were on the Mickey that we sent in with her). And then, after the quickest hour ever, I gave her a tearful hug and kiss and they whisked her off. 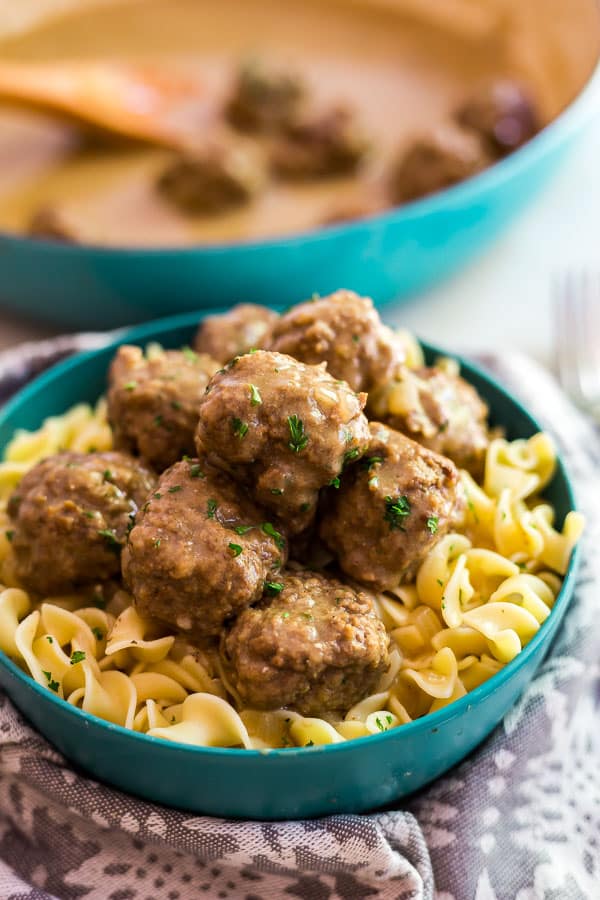 T was not happy to be going with strangers, but I'm actually glad they didn't draw it out. As you probably remember, anesthesia terrifies me. I know it's irrational, but that's the big thing that scared me about this procedure, the fact that she had to be put under.

After they took her, J and I headed out to the waiting area where he grabbed a Gatorade and I made myself a second cup of coffee (a major rarity for me, but I needed that liquid comfort) and I quickly pulled myself together. I grabbed a copy of Food and Wine that was in the waiting area and shot my mom a quick text letting her know it had begun.

And before I could even get through the first third of the magazine, the doctor was walking out and telling us everything had gone well and that we were welcome to head back to recovery and see our gal. The procedure is only around 15 minutes log, but I had previously thought it would go one forever in my anxiety. I'm so glad I was wrong. 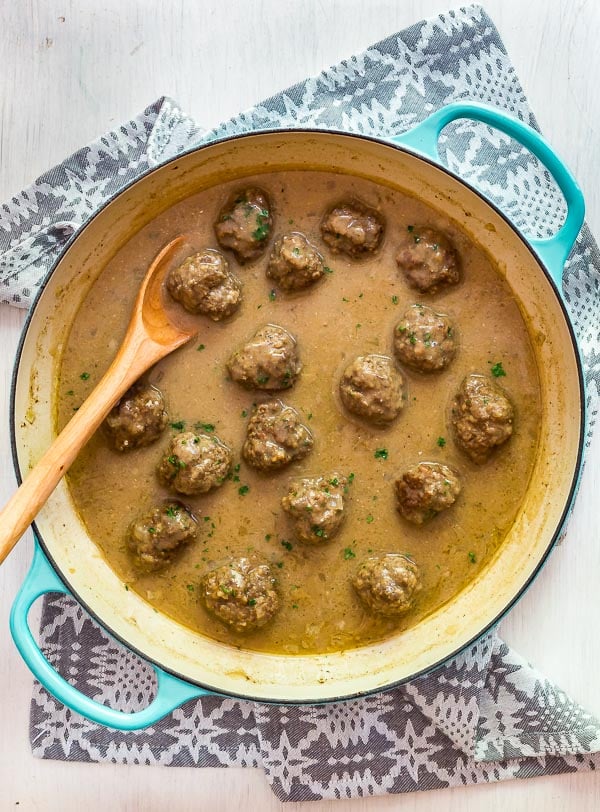 When we got back to the triage area, there were a couple nurses back there, one of whom was holding T and giving her some snuggles. For some reason this made me really happy, to see how much love they all had for her.

When we got there, they handed her right over to me. She was awake, but very groggy and not too excited to be so out of it. They brought her some water, which she promptly chugged and asked for more. They were pretty great about checking us out quickly and within probably 30-45 minutes we were out.

We were told that T might be down and out during the day and also might not have much of an appetite from the anesthesia. They also said she could bounce right back and that it could really go either way. I'm happy to say that T was the latter of they two. By the time we were out in the parking lot, T was pointing at a car and saying "daaaaaaa!" 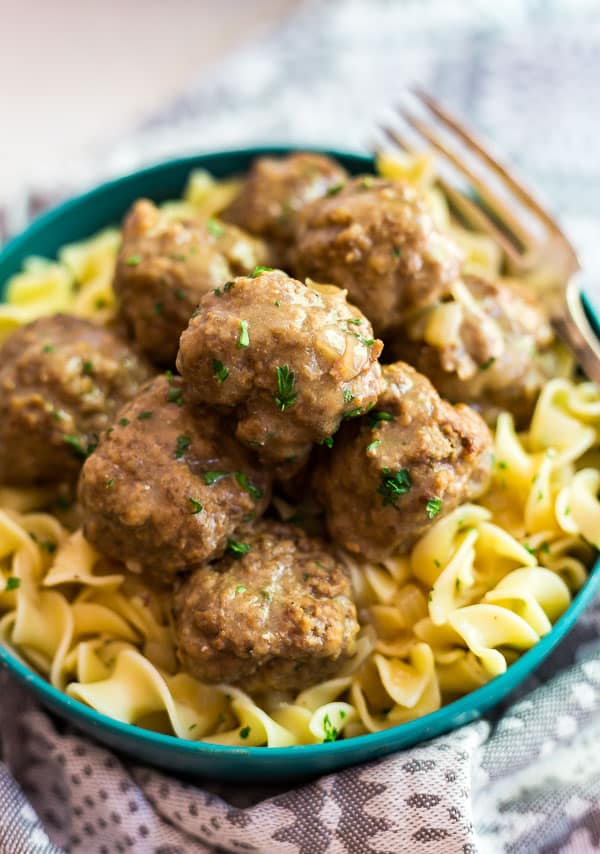 When we got home, I sat T at the table and gave her a couple cheerios to see if she had any appetite. She promptly scarfed them down and then proceeded to eat several other helpings and a whole banana. After that she played happily, ate a huge lunch and then took a super long nap.

I'm so glad it's over with and hopefully she'll have a much more comfortable winter than last year. I'm also thrilled it was just as easy as everyone had said. Even though she had a rough weekend (she had some major teething issues this weekend which caused some major discomfort and alllllll the drool!) she's doing pretty well!

Before I left home, it had never even occurred to me that people came from families where no one could cook. Naïve, I know. It was one of many ways that my mind opened in NYC and I learned about cultures other than the small-town one that I enjoyed for so long. This was quite the turning point for me. Learning to cook became a bigger priority and also a passion.

I come from a long line of amazing cooks. Food was such a huge part of our family culture over the years and still really is. Many of my most vivid childhood memories include food in some way or another.

Leading the charge in delicious food are my Grandmas' Rose and Eve. Both from vastly different culinary backgrounds, they each brought so many unique and delicious ideas and tastes to the table (see what I did there?) and they really contributed to my love of food and my willingness to try new things. 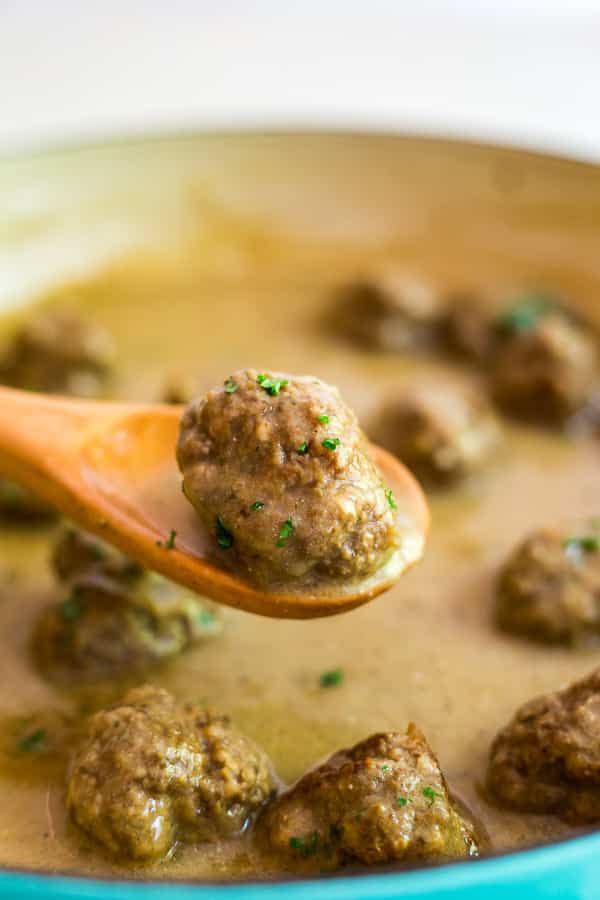 One of the more comforting dishes my beautiful Grandma Eve made, and a definite family favorite for my sister and I, is her Swedish meatballs. There is something to be said for a stick-to-your-bones gravy that is rich in flavor, but still manages to be light. Now that the weather will soon be getting colder, I’m preparing to segue into more cold-weather-friendly meals.

Swedish meatballs are the perfect cap to a cold and gloomy Sunday but quick enough to be so comforting on a weeknight. You gotta love recipe that's super easy to put together. You don't even have to put turn on your oven- it comes out beautifully in a pan or braiser on your stovetop.

I took a few liberties with the meatballs, which I’ve noted in the below recipe. I grew up enjoying these with boiled or mashed potatoes (Grandma frequently went with mashed). As you can see, I opted to serve these over egg noodles which is also delicious and a bit less work than mashed. Just trust me on this and make them. 🙂 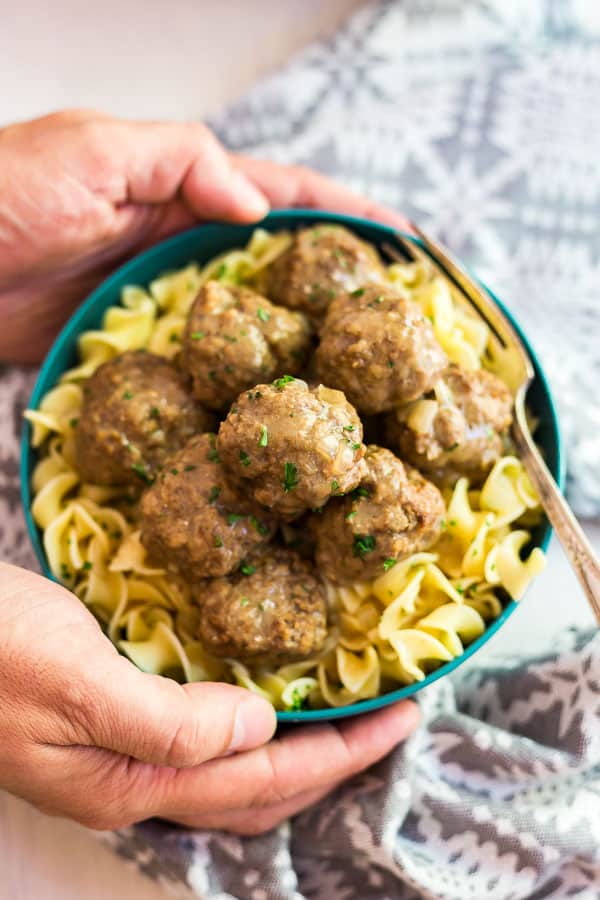 Other cozy cold-weather meals include: 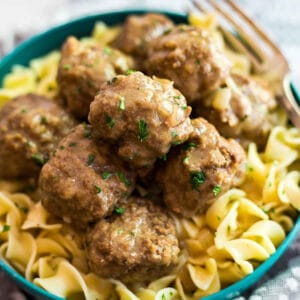 This tastes great over egg noodles or with potatoes
Tried this recipe?Let us know how it was! 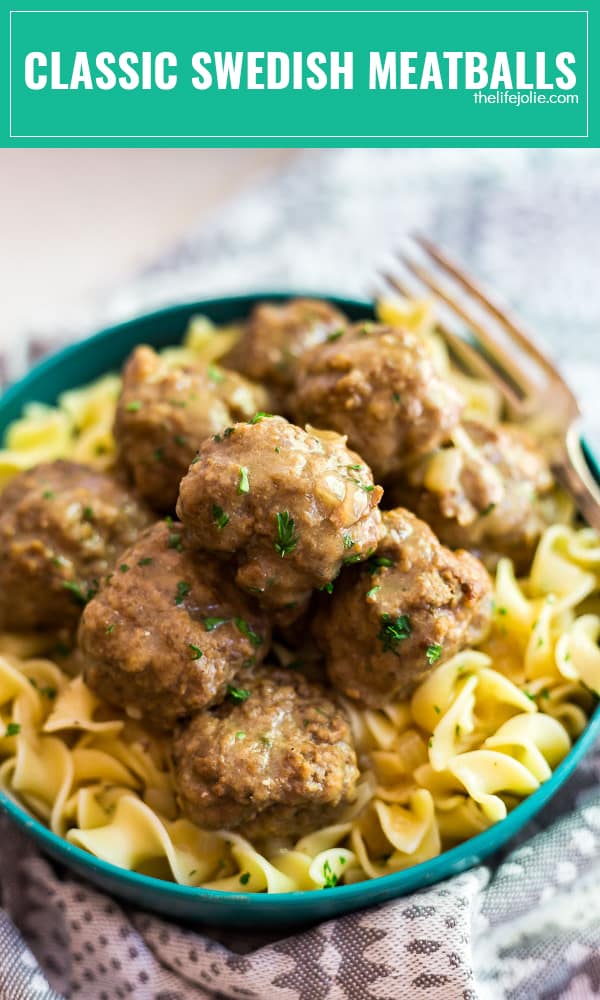