This PMS Bark is the ultimate treat to fulfill both your sweet and salty cravings! Made with rich dark chocolate, salty potato chips and pretzels, peanut butter chips and buttery toffee bits, this recipe is SO easy to make and really addictive- you won't be able to get enough!! 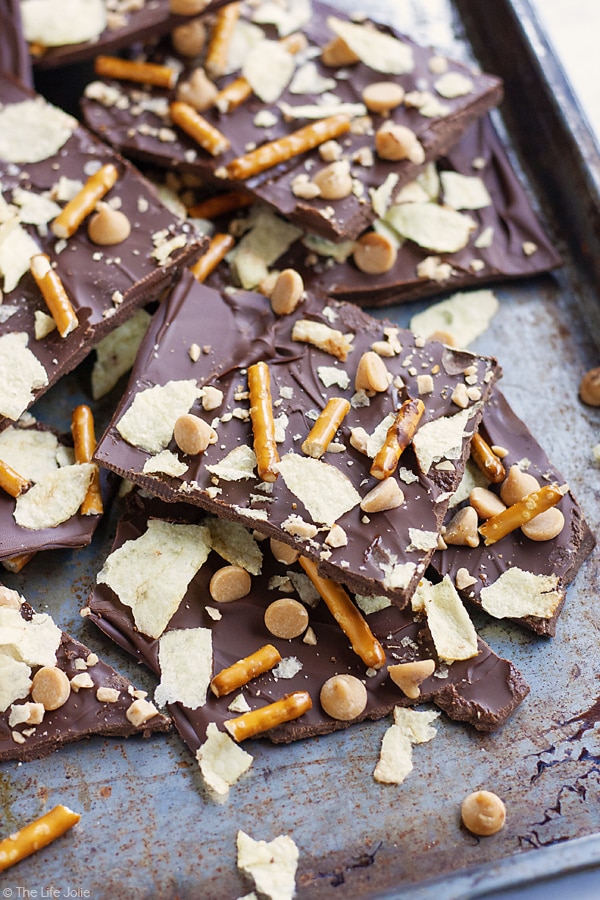 So A is officially potty training. I struggled with the idea of potty training her for a while. She's been interested in the concept of using the potty since before she turned two but I really didn't believe she was ready until very recently.

Now some people are super into potty training really early and I have nothing against that. Every kid is different and different things work for different families. I am only an expert on my own kids, after all.

But our amazing Pedi and I had this great conversation at A's two year appointment where we were both on the same page about the fact that we really didn't want to push A into doing something that she isn't ready to do. Our thought process was that when it became apparent that she was ready, it would be much easier to actually do the potty training.

Fast forward to the present, A's daycare teacher's have been telling us since around the holidays that she's been way more interested in the potty and when we're ready we were welcome to start sending her in with undies. 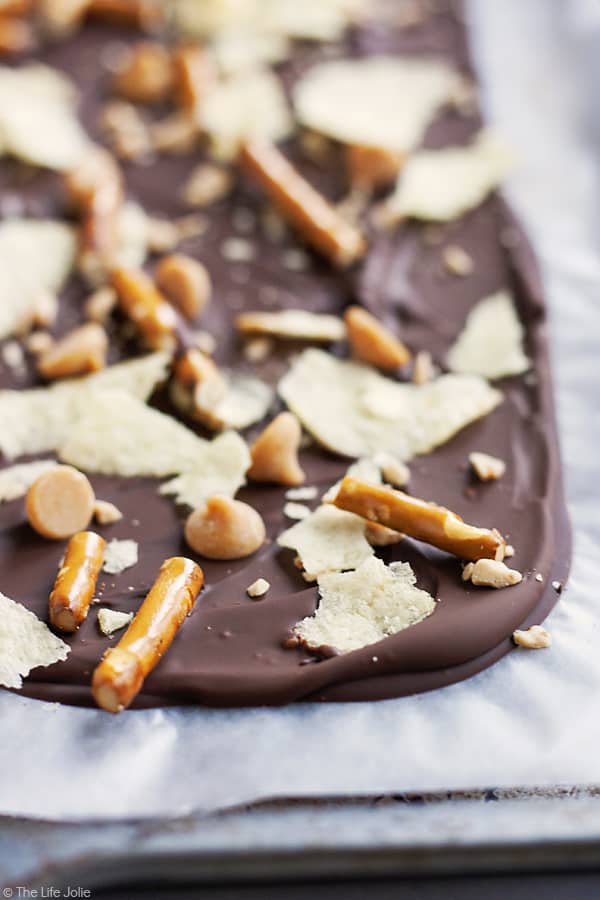 Did I mention how freakin' amazing my girl's teachers are? Not only have I always genuinely felt happy and secure with the knowledge that my girls are in excellent hands when I have to be at work (and my girls absolutely love each and every staff member at their center- with very good reason!) but they are also totally willing to work with us and participate in the dirty work that is potty training.

Anyway, I couldn't possibly imagine doing something like this around the holidays, most specifically because of the interruption in our girls' routines that the holidays and having house guests presents. It seemed like a recipe for disaster. So we tabled it for a bit, kept an eye on A for signs (which were all very much alive and present) and went about our life.

The beginning of January presented some very busy weekends which also included some work-outings for J and I. I was not about to saddle my parents with having to babysit at the beginning of potty training. That wouldn't be very nice of me. 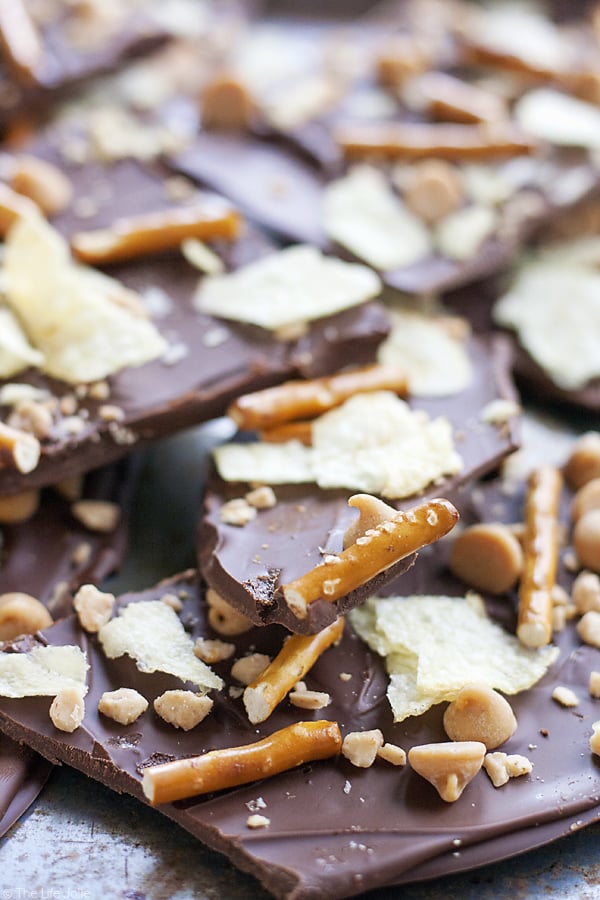 So finally, a couple Sunday nights ago, we put A in her diaper before bed and everyone agreed that it was the last diaper because A is a big girl. And thus potty training began.

We considered starting the first few days at home but ultimately decided that since A spends a good part of her weekdays at daycare and they have a pretty distinct routine there (and a group full of other kid's A's age who are also just starting potty training. This is one time that we're totally down with a little peer pressure) it would be a good idea to have the daytime portion of her first potty training days occur at daycare.

I won't lie, the first two days were rough and involved a lot of accidents. I seriously had my doubts and began questioning our decision to start potty training. But as the week progressed, A turned a corner and accidents became few and far between (and often a result of us not prompting her to use the potty often enough). 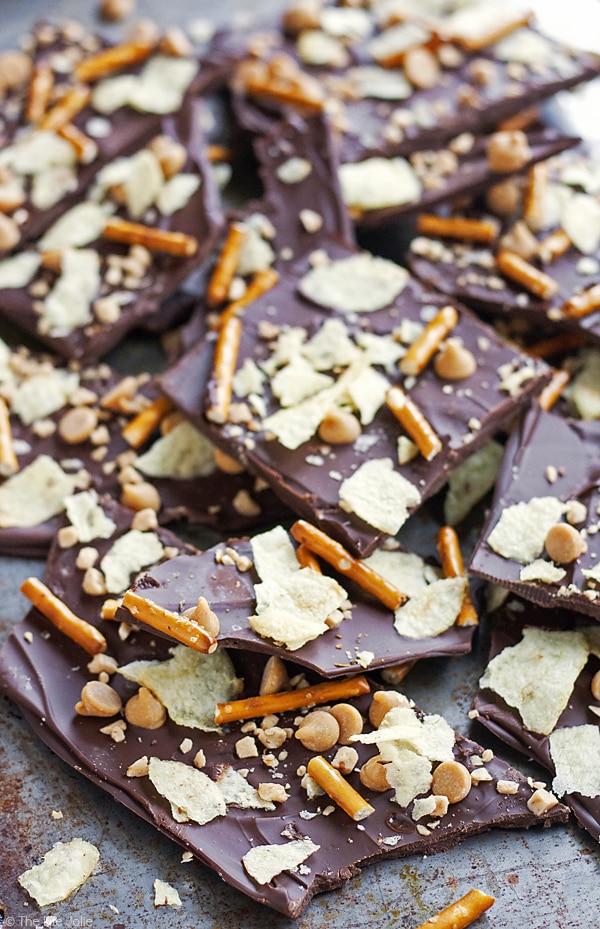 And here we are now, almost two weeks in. Accidents during A's waking hours pretty much don't happen anymore and more often than not she wakes up dry in the morning as well! I will be sure to write a more specific post about the details of our laissez-faire style of potty training, but let me just say, I am so proud of our girl! The pride that she has every time she successfully uses the potty is just so awesome!

Now given the anxiety that I had at the beginning of this thing, it should come as no surprise that I was hitting the chocolate hard. Though I love a nice glass of wine, I'm not a big drinker anymore (after an especially rough night at my cousin's wedding this past June). So chocolate and munchies are a delicious alternative which I try to enjoy in moderation.

On one particularly liberal chocolate-and-potato-chips binge, I was thinking about how that sweet and salty flavor combination is a constant refrain when it comes to my PMS cravings. Since I'm still nursing, I haven't had to reckon with PMS in over a year and a half (a fact that I'm not even a little bit sad about. I'd be fine if it never, ever returned!) but the memory is alive and well. 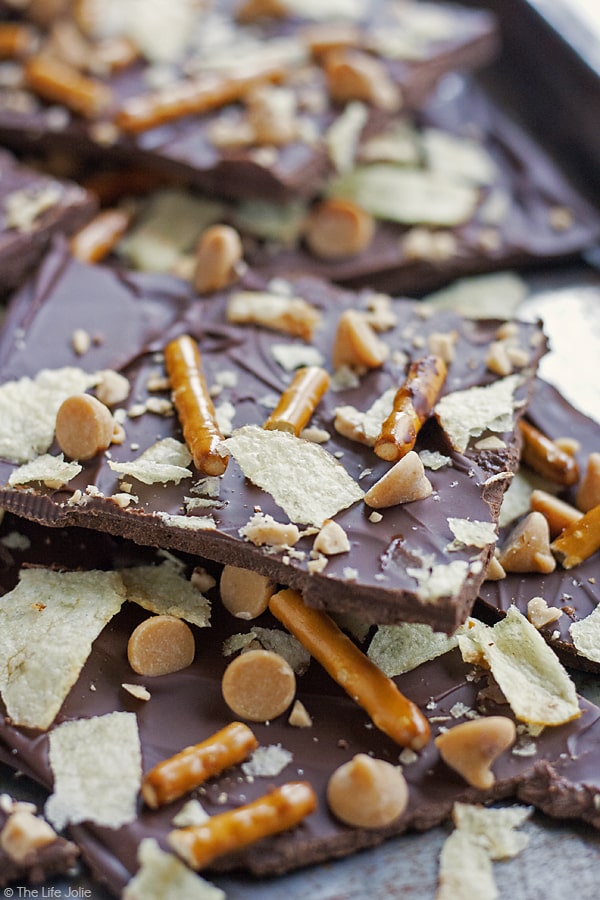 And I said to myself, "Self, why aren't there more sweet and salty options to help curb those PMS-y cravings? You really need to get on top of that!" And thus, PMS Bark was born.

So here it is, two layers of dark chocolate topped with salty potato chips and pretzels, peanut butter chips and buttery toffee bits.  So pretty much everything you need to get you through those rough PMS-y days that we all have. Or when you deserve a treat. Which is always.

I strongly encourage you to get to your kitchen and throw this together. It's super easy to make, tastes even better and will stay good in your fridge for a week or even two (as if you'll allow it to last that long!).

Other tasty sweets include: 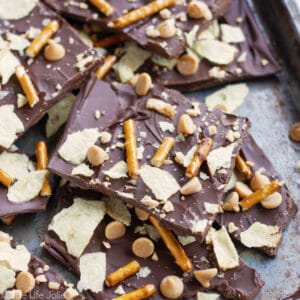 If you're concerned about breaking up the bark into shards, you can always score the second layer of chocolate before you place the topping on to make it easier to break up.
This will last a good week or two in your refrigerator (if you don't keep it in the fridge, it will have a still delicious, but slightly melty texture).
Tried this recipe?Let us know how it was!