Oh my gosh, you guys. We are now less than one month out from my sweet little T turning one!  That's right my friends, this gal is 11 months old! It's crazy, I could have sworn I just gave birth to her yesterday!

This past month has been pretty great outside of all of battling all the illness. But illness aside, T is all sorts of fun! In addition to crawling everywhere, pulling up on everything and successfully climbing the stairs, T has now started to clap, which is too cute for words. She is also just starting to use a little baby sign language (so far she's used the sign for eat!).

She also has begun pushing chairs around in an early attempt to walk. She's not actually close to walking on her own but she's definitely moving in that direction.

While we've always generally failed at putting up baby gates, we have a rather large painting that we never got around to hanging, and it's actually been pretty effective in serving the same purpose as a gate (and much prettier than a gate as an added bonus!). The downside is, unless we rig it up just right, Miss T is pretty good at moving it over so she can get through. Thank goodness we go out of our way to be on top of things! 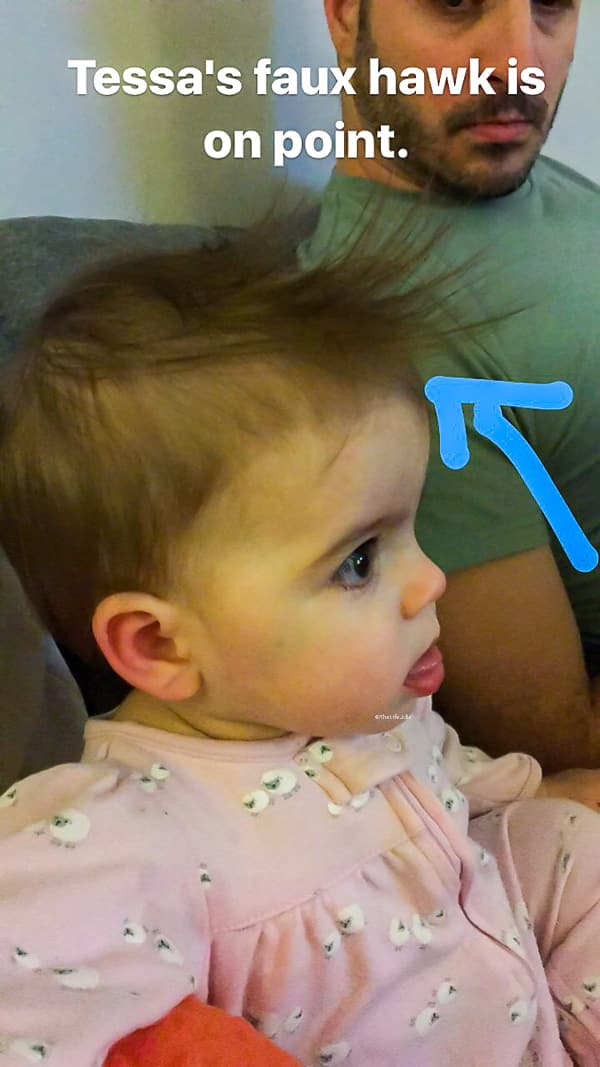 She is such a little rascal. If she's headed in a direction that she knows isn't allowed (and believe me, she knows!) and I am coming her way, she will flash me a giant, knowing grin and immediately start crawling faster!

Her sister also enjoyed pulling this stunt but when T does it, there's an extra gleam in her eye. I suspect this little one will be keeping us on our toes for years to come.

T is a little table-food eating machine! This gal absolutely loves having meals at the table with us. For the most part it's incredibly cute too. I feed her tiny bits of food as well as give her tiny pieces on the table in front of her so she can feed herself. I'd put it on a plate but the minute that plate hits the table, her first move is to grab that plate and promptly dump it's contents. 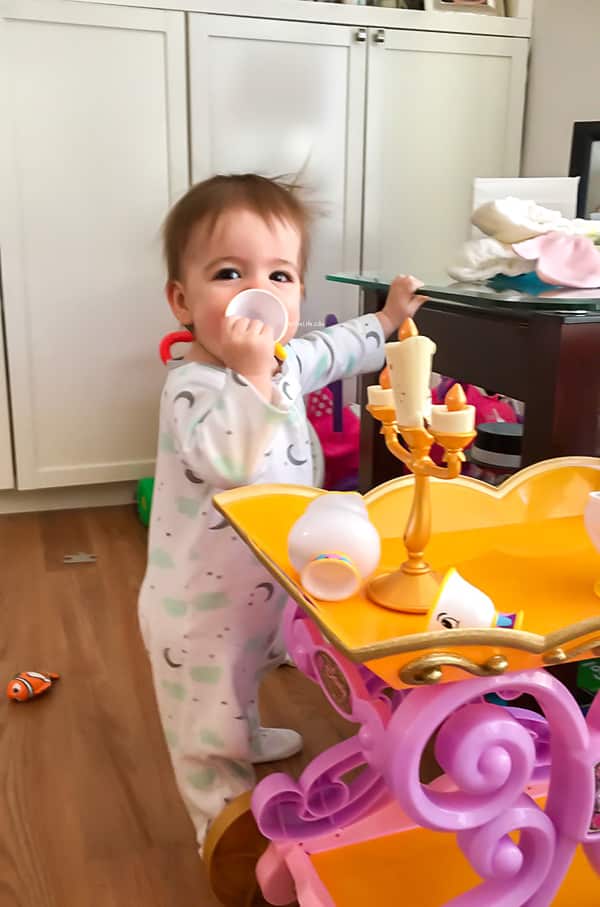 T is still pretty much rocking the nursing. We did have a couple days right around the time she turned 11 months old that she was super distracted and not really wanting to nurse much. I was a little paranoid that she had suddenly decided to wean but it turns out her two top teeth broke through the very next night and after that we were back on track.

I am super grateful that we are still nursing and have actually grown to love it. T looks so big to me right now, and I can feel us creeping closer to toddlerhood with each passing day. It's so bittersweet, particularly since I know I'll never again have another baby of my own (that's a definite downside of having a tubal so quickly after T was born, it basically made the reality that every first is the last first so much more stark and I can no longer operate under the notion of ignorance-is-bliss about that fact. Still the right decision, though.). 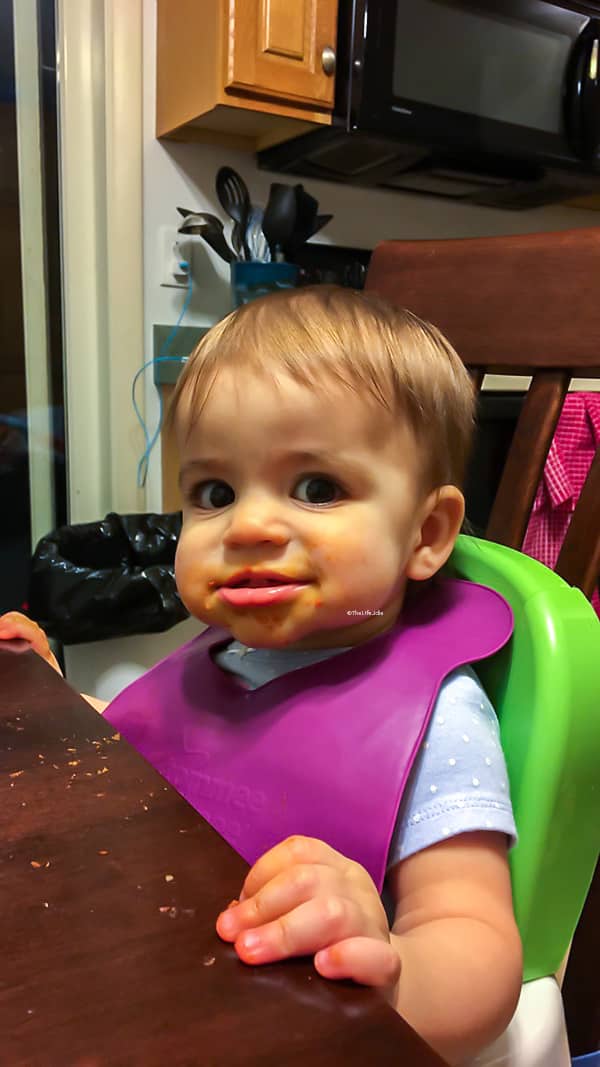 T has certainly become a bit more distracted during nursing over the past few months. I'm told this is pretty normal. I don't really see myself nursing too long past a year, and definitely not pumping past a year. I love what nursing has been for T and I, and I am so glad to have had a more productive experience this time around.  While I'm a little sad to end nursing, I suspect T will happily and easily transition out of it.

I've been giving her a sippy cup with a little water here and there. More just for her to get used to it. With A, we started the sippy cup after a year and the transition was terrifying, so after talking with a friend with kids around the same age (she started introducing sippy cups of breast milk much earlier with great success) I figured I'd throw the cup into the mix.

For a while T would just play with it and made a game of throwing it onto the flow, as she does with most things. Lately, shes actually been drinking the water. Sometimes, if daycare has a little extra pumped breast milk left over from the week, I'll pop that into her cup for her, which works out nicely since it's usually only an ounce or so, not really enough to use in place of a feed for me to pump (Ugh, pumping on weekends! No thanks!!).

While sleep has generally been consistent as always, that one night I mentioned in relation to T's two top teeth was rough. Luckily, it was a Friday night, so no work the next day. J and I had stayed up early getting a little work done and watching our show in the background (lately, we've been into Homeland- SO good!). It was around 1 am when we finally decided to go to bed. And naturally, right as we were just turning out our lights, T started fussing. 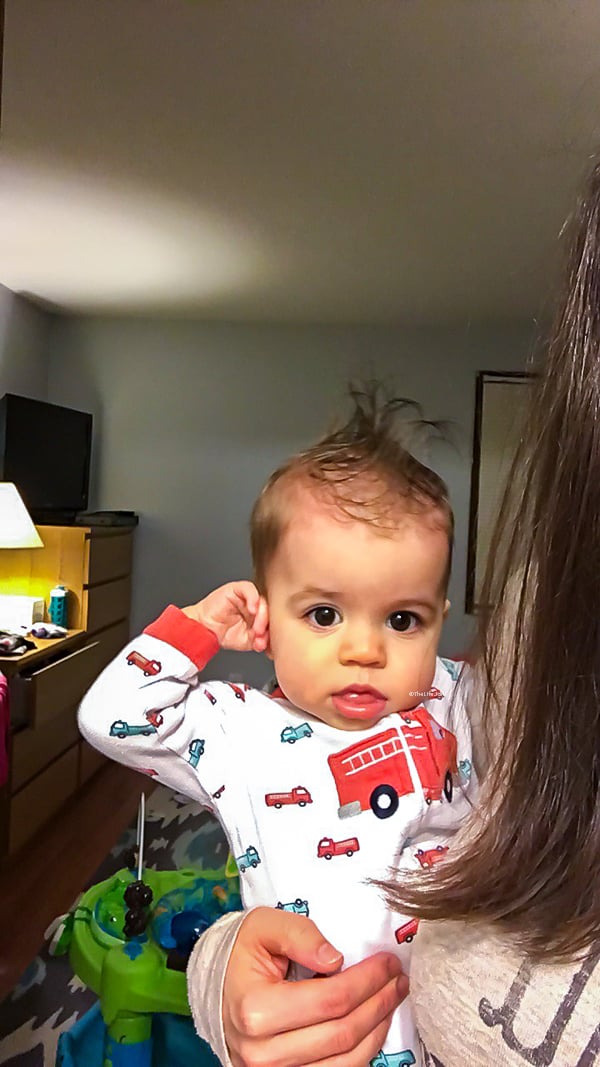 So we waited a minute to see if she was just shifting between sleep cycles. But a few minutes later she was still fussing and it sounded as though it was turning into crying. Any parent of a baby will tell you that you kind of learn what your babies different cries are for. Within a few minutes, it was obvious that poor T was uncomfortable.

First J went in and tried to give her some snuggles. She wasn't really down with that. Then he gave her some baby ibuprofin. After that, I went in and tried giving her a snuggle. When that was unsuccessful, I brought out the big guns: The Boobs. That seemed to do the trick and I got some excellent snuggles after she fed!

The next morning, knowing full well the previous night was a direct result of some teething, I popped my finger into her mouth to check things out and sure enough those two top teeth had just begun to make their way through! Thank Goodness! Needless to say, she was much happier for the rest of the weekend and everyone slept well from then on.

The planning of T's first birthday party is well underway and the invites have been sent. I'll share more specific details about it over the next few weeks, but I'll tell you this- I think it's going to be super cute! Stay tuned...