This Minestrone Soup is a quick and easy recipe. You can take it in whatever direction you want and change up the vegetables to make it your own. It makes a great to have on hand for a healthy lunch or dinner that you can enjoy all week with a sprinkle of cheese and a hunk of Italian bread!

One thing I've been terrible with lately is planning my lunches for the week. I've been so disorganized and as a result I not only spend my mornings rushing around trying to piece together a midday meal, but often end up spending money necessarily at our cafeteria due to my own failure to plan.  Don't get me wrong, I love a good grilled cheese or quesadilla, but this is getting excessive. So this weekend I decided that this needs to stop and I got to work making a nice, big pot of Minestrone Soup. 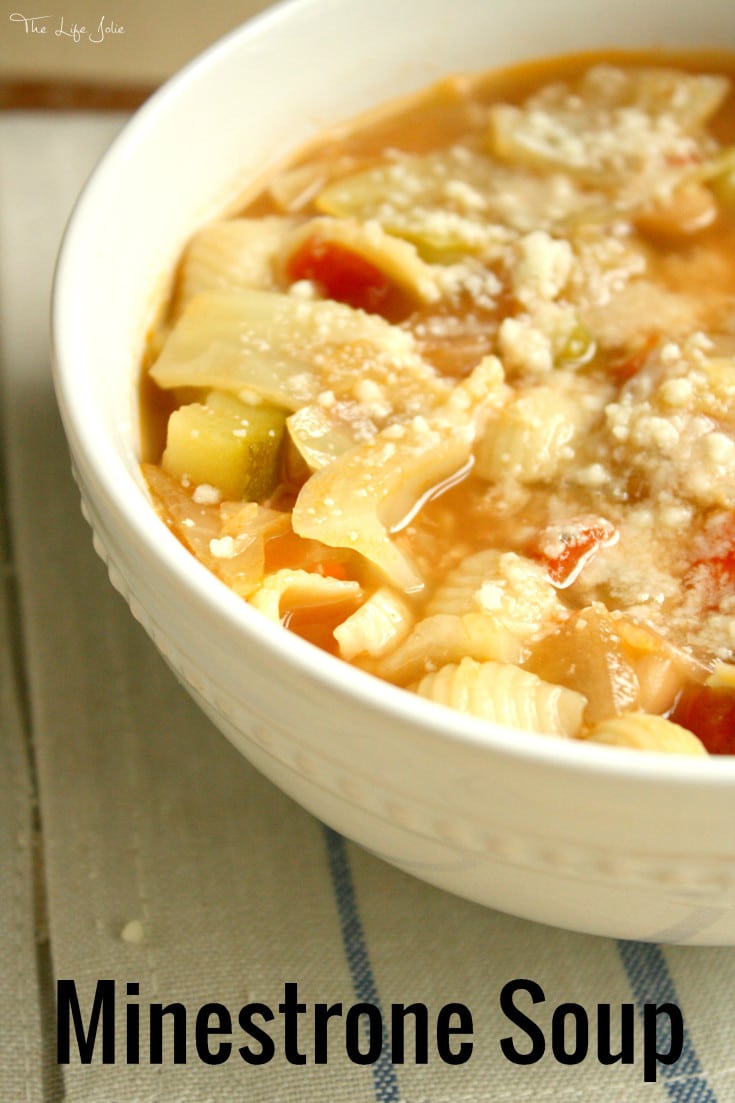 I am a person who loves soup. I will eat it at any time of the day no matter how hot the temperature is outside. It's a good thing too because this week is supposed to be a hot one here. But seriously, there's something so comforting about a big bowl of soup filled with delicious vegetables and sprinkled with Romano cheese! 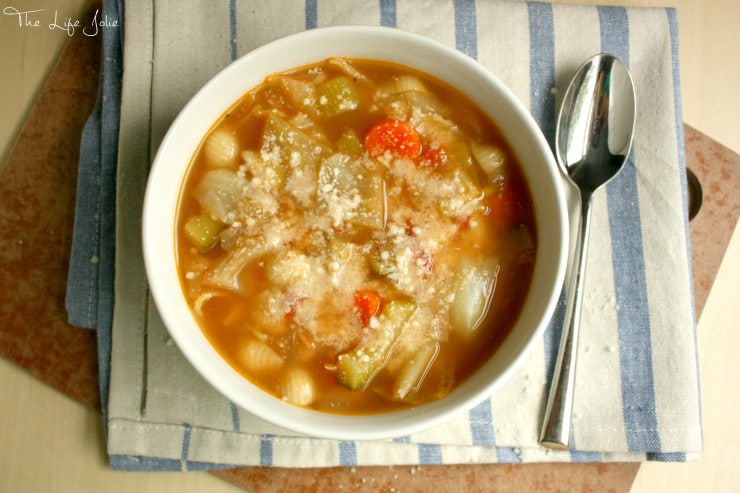 This is a Minestrone Recipe that I adapted from the Minestrone with White Beans and Pasta recipe in the Soups (Williams-Sonoma Kitchen Library) by Kolpas, Norman, Williams, Chuck (1993) cookbook. It was given to me by my mother in-law after she made it during one of her visits and I could not stop eating it! Seriously. It was a feeding frenzy and I am not ashamed. I mean, it's healthy and delicious. So binge away! 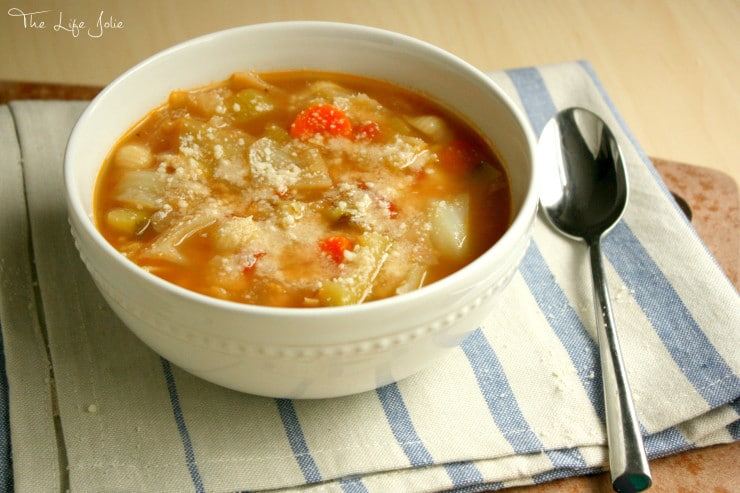 I really just loosely follow the ingredients list and add things of my own to make this the way I like it. I think the addition of the balsamic adds a nice, unexpected zing without being overpowering (I was skeptical at first about that and the sugar but I'm now a believer). This soup is jam-packed with all sorts of veggies and a little pasta as well. The great thing is, you can really take it in any direction, adding and removing things as you please (and clean out your fridge while you're at it!). 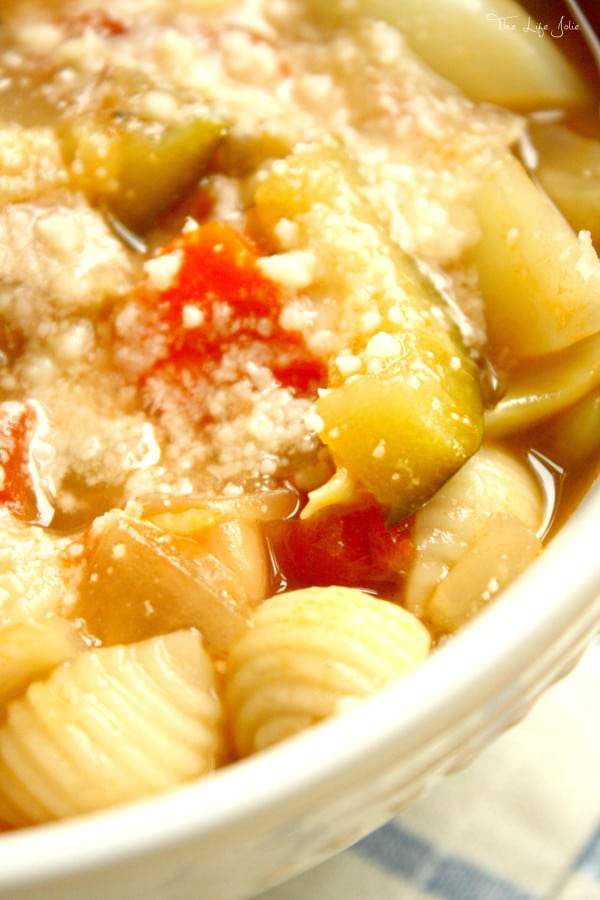 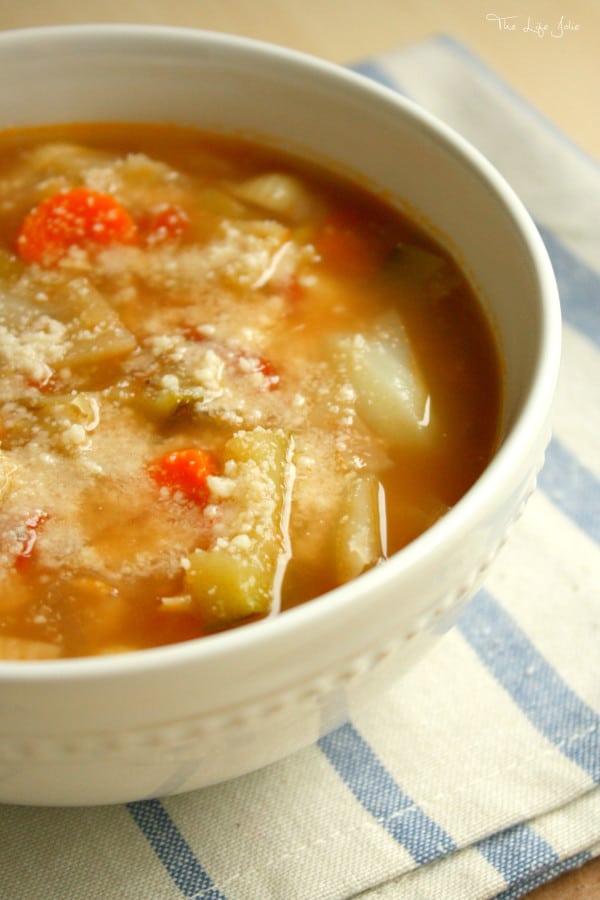 Place your oil in the pot and saute your onions, garlic, carrots and celery with a sprinkle of salt and pepper for a few minutes or until they soften a bit.

Add your 2 boxes of broth, can of diced tomatoes and the next 9 ingredients and bring to a boil. Reduce to a simmer and let it simmer for 20 minutes.

Add your pasta and let it cook a few more minutes until the pasta is cooked. Add your balsamic vinegar and some salt and pepper to taste. Remove the parmigiana rind and bay leaf. Sprinkle with Romano cheese and enjoy!