Ok, didn't I just write a 9 month update for my Tess?! This may have something to do with the fact that I was a tad late on this but either way, wow! Can someone please stop the clock right now?!

So this month brought T's first Christmas and what a whirlwind it was! If you have kids, you probably know that holidays are a lot for young ones to handle and can reek havoc on a baby and toddler schedule. With that in mind, I have to say I'm proud of both my girls. They handled the madness-that-was the holidays like pros. 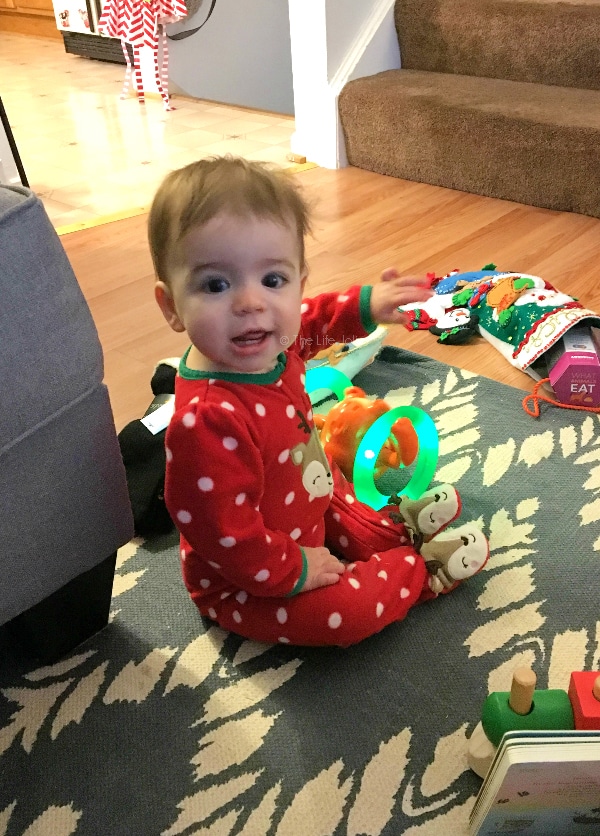 On Christmas Eve we hung out during the day and added some finishing touches on our dishes-to-pass for that night. Both gals got a good nap and once we were all dressed and ready, we went to an early children's mass at a local church.

I was prepared with all the stickers for A and T was pretty good although she was about ready for a second nap when we got to church. Naturally, she fought and it and was a bit fussy. The latter part of mass involved her and Justin hanging in the back. 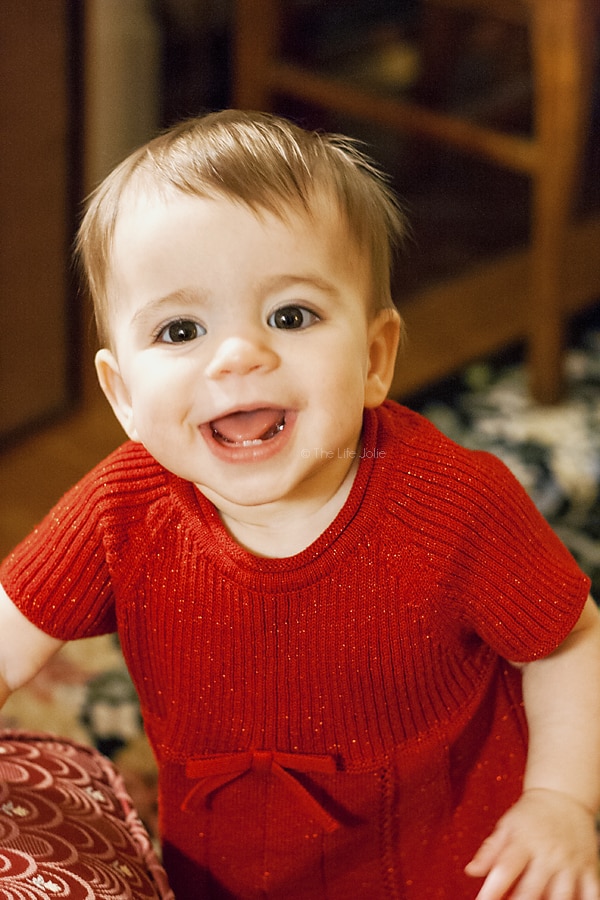 She was more than happy to crawl around and be passed around at my Uncle's house after church. A was just happy to get to hang with her older cousin Stella. Those girls were running circles around the house which I'm sure made my parents and Aunts/Uncles/Grandparents a bit nostalgic. 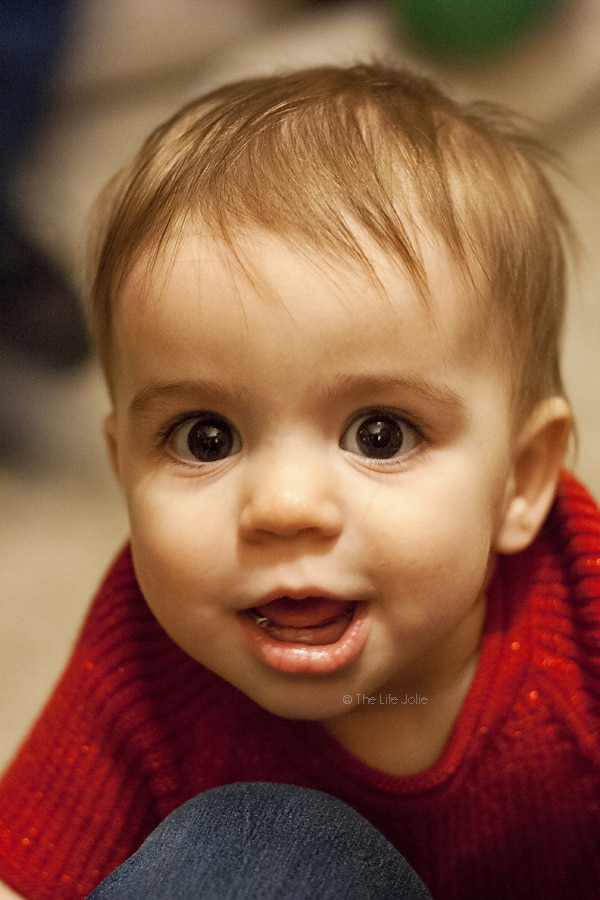 Christmas morning began with T having a projectile spit-splosion all over our bedroom/bathroom. Oddly she only got a drop or two on her jammies, so the Christmas jammies stayed on. She was pretty happy after and was thrilled to follow her sister around and play with all the new toys that Santa brought. 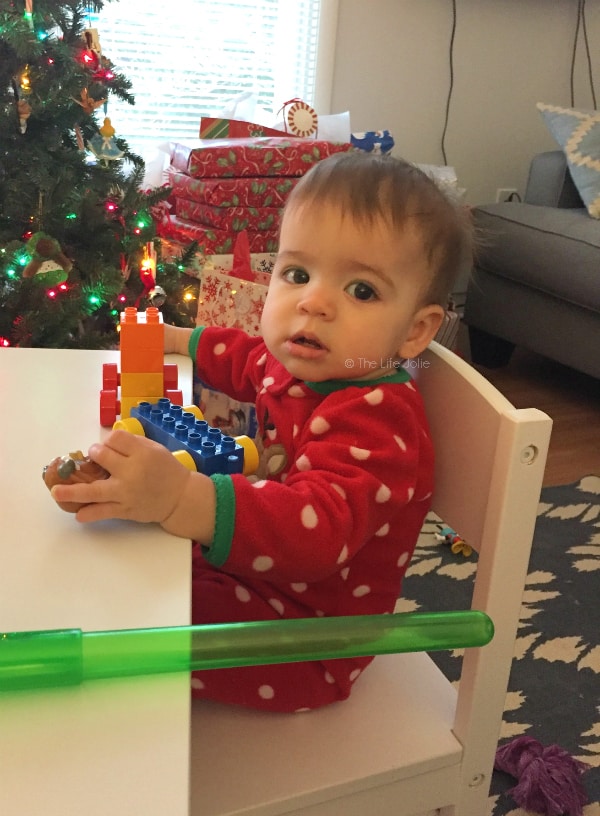 Around the time we were opening gifts (my sister, parents and Justin's parents were over) we tried putting her down for a nap but she was having none of it. It wasn't until after our big breakfast that she was finally ready.

We spent Christmas Day afternoon and night at my parents house enjoying a fantastic meal and relaxing. The girls had a blast and once again behaved really well considering the interruption to their routine. T was also battling another ear infection during this time and was still a rockstar through it all. 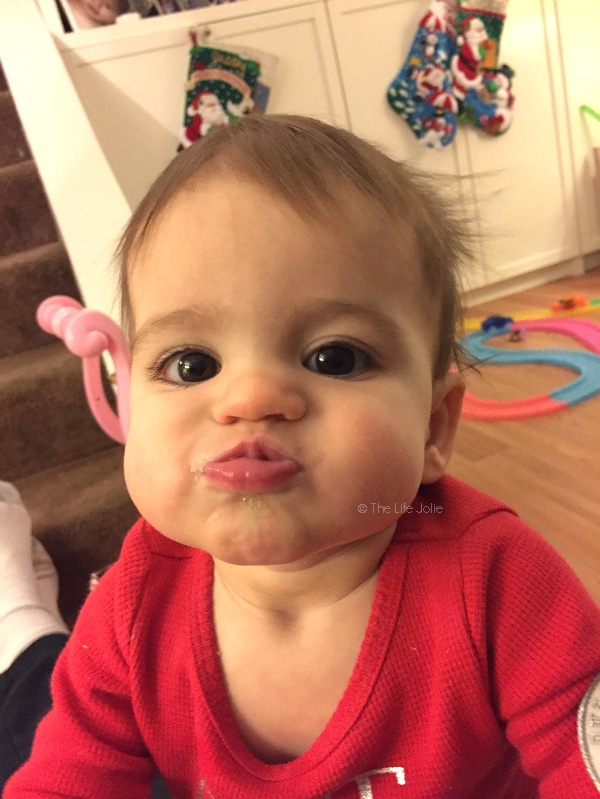 She really didn't understand what was going on but she still had a great time, as usual. A totally understood what was up and was super excited. I think she got a bit overwhelmed with opening gifts and we ended up bringing some of her still-wrapped gifts to my parents house to finish opening there, which worked out well. We all got seriously spoiled this year!

New Years was also pretty relaxing. We had a nice lunch with T's Godfather and ended up having a casual dinner at my parents house and later falling asleep long before the ball dropped. 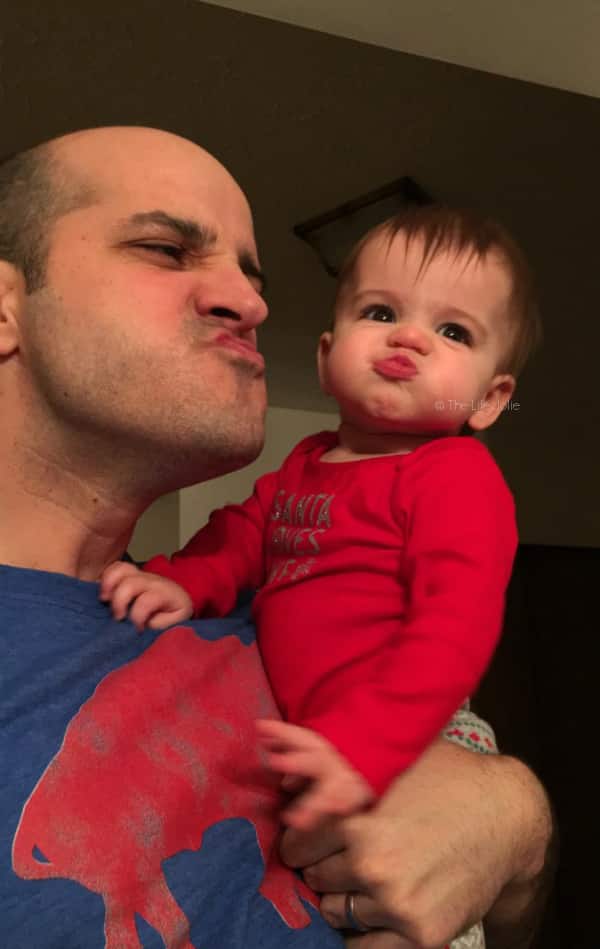 J was feeling pretty under the weather that whole weekend so I took the girls to an open house at my Uncle's house so he could have a little break to nap and try to get better. We had a great time catching up but it was at this event that I began to notice that T was fully engulfed in the "stranger danger" phase. If I left her eyesight for even a second she was not happy about it and she made sure everyone knew. The only person she would even go to that day (ans only for a short time) was my mom.

She is crazy about her daddy and sister (and Maciebear too!) but currently she's particularly attached to me and gets fussy if I leave to room at home as well. I'd be lying if I said I didn't secretly love it. I've gotten so used to J being A's favorite (though she's come around to me quite a bit and we have our own special and silly moments which are such a joy).

It was while my in-laws were here that T finally starting being willing to try feeding herself soft solids as opposed to purees. We're still giving purees since I have them but she pretty much gets what we eat (within reason, if I think it's a choking hazard she can wait on that).

I just get everything really small and give it to her and she goes to town. She loves eggs, grapefruit, broccoli, rice, chicken, sausage, pasta etc. It's good fun and a bit messy. I have permission to give her everything but honey. So we're enjoying T's new found love for all-the-things.

Nursing is still going strong. If there is a boob anywhere near T, she dives right in. We're in the home stretch now and I can see the finish line in the distance. I have mixed feelings about stopping. I love the bond and the knowledge that I'm providing the majority of her nutrients. I wish it could have worked out like this with A but I don't feel guilty that it didn't. 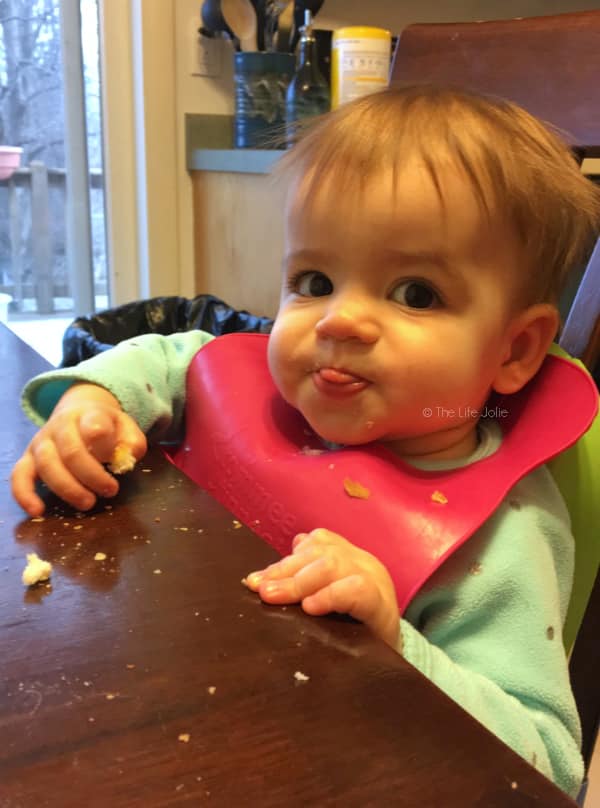 I also like the fact that it's been a game changer in terms of losing weight. I'm terrified to see what will happen to my waistline once I'm not sharing all my calories with T.

I won't miss the pumping. It's definitely a hassle to have to leave my work twice a day and the act of pumping is also not my favorite thing. I'm glad I've been able to make it work but I'll be glad(er!) to never have to use a breast pump again after this.

T continues to sleep like a pro. I am so grateful for this. We put her to bed about 30 minutes before A and she gets a little mad. I think she wants to stay and hang. But that usually means she fusses for a moment or two and then rolls over and goes right to sleep. 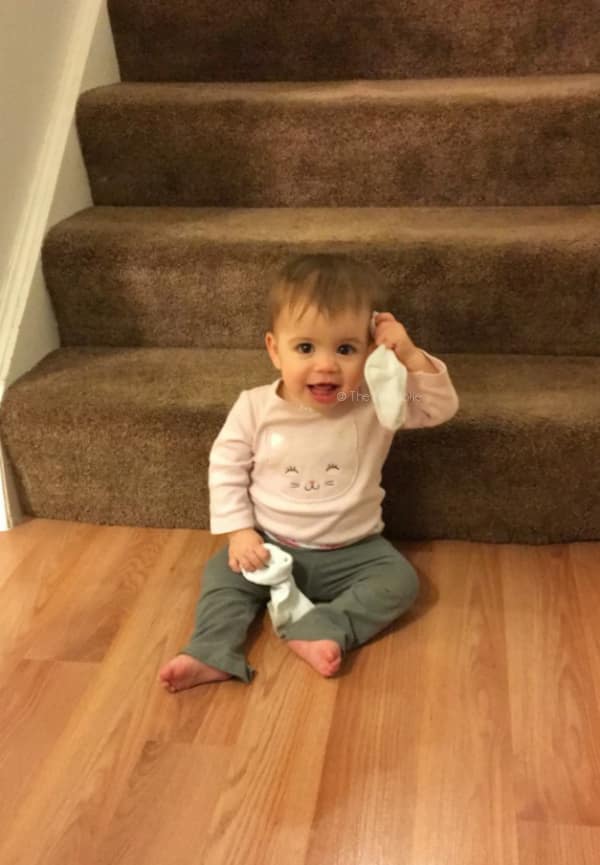 Tess continues to love the raging bull face. She also loves to laugh with us. When we get her giggling, she never wants to stop, it's the best! She always gets really happy when I sing to her and loves if we put her upside down. A gets such a kick out of tickling T and making her giggle.

This gal definitely has a mischievous streak. She's in the middle of a leap where she loves to test limits and she always turns around when she knows she's doing something she shouldn't, just to make sure we're watching (we always are). And then gives us a big old grin. And if I playfully chide her she cracks up even more! 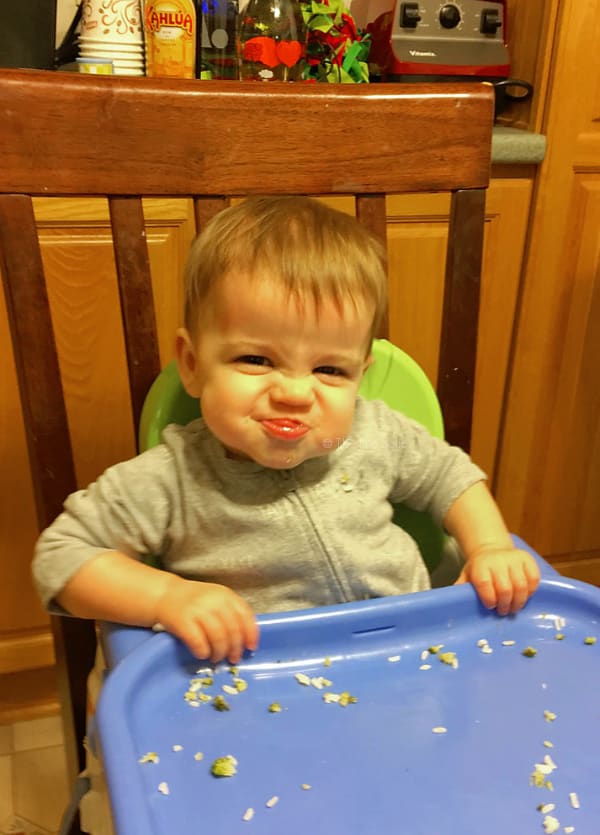 Standing continues to be one of her favorite things to do. Some days, she even gets extra daring and is able to stand on her own with no hands for a second or two before she tumbles down. We cheer her on but I'm so not ready for her to walk yet! She's already super fast at crawling.

T-girl is moving at the speed of light. It's so bitter sweet, but mostly sweet! I absolutely love that we're beginning to see bits and pieces of her sunny personality. Her fun sense of humor is beginning to come through as well as a fiery determination. It's especially beautiful seeing my two girls interact and love on each other. 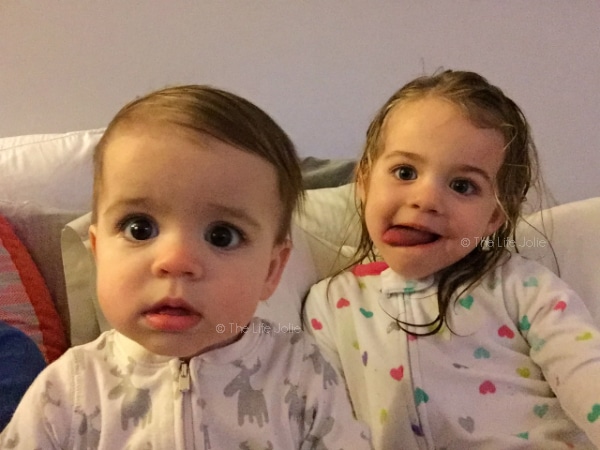 There's so much that I never knew or understood until I had kids. I was really, really happy before them but I never could have imagined the amount of joy they wouldto our home. There aren't enough words to adequately describe it. It's the very best thing in the world!